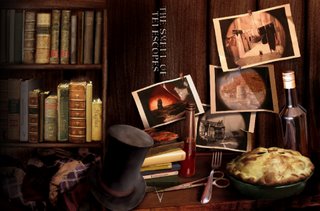 "Of all questions, why? is the least pertinent. It begs the question: it assumes the larger part of its own response; to wit, that a sensible response exists." (Jack Vance, Rhialto the Marvellous)

The above quotation comes from the fourth (and final) volume in Jack Vance's Dying Earth sequence. I rate this sequence as the finest achievement in fantasy literature. Vance is a totally remarkable writer. I'm particularly pleased by this quote because it concisely articulates something I've believed for a long time. Why? is a horrid question, a question that leads to more and more questions until one is compelled to cry "The Big Bang!"

Every time anybody asks why? a reaction is created that always ends with the same final answer. To avoid unnecessary shouts of "Big Bang!", please ask how? when? which? what? where? or who with? instead of the accursed WHY?

I have been negotiating with the Dylan Thomas Centre here in Swansea for the launch of my next collection, AT THE MOLEHILLS OF MADNESS. It seems probable that the launch date will be Friday September 15. I am hoping that talented duo The Frictionless Man will be providing live music for the event! They are my favourite local act, and one of the few local acts talented and original enough to achieve the big time.

Other news... My early collection of short stories THE SMELL OF TELESCOPES is soon to be republished. The publishers are Eibonvale Press and they are based in Slovenia. The first edition of this book was published more than six years ago but it still remains a favourite among my works. The Eibonvale edition has an interesting cover (see above picture) and internal illustrations. I love books with internal illustrations!

As I am on the verge of moving house I have been clearing out a lot of my possessions, giving stuff away or throwing it out. I had to make a decision: was I going to be a man with lots of possessions or someone who can travel lightly through life? I decided to take the latter option. Objects don't have the same appeal they used to. I've changed a lot in the past few years. I now prefer people.

Last night I was on TV again! Nothing to do with writing: I was (briefly) interviewed for the BBC Welsh news about my views on the Welsh Assembly. I muttered something like "Having our own Assembly means we can make our own mistakes instead of having them imposed on us from England!" I was mildly pleased with my performance but when I saw myself on TV later I looked terrible, really unkempt and rough, like a cross between a docker and a terrorist! It's curious that I have only been on TV twice in my life and both times were during this month, May 2006!

A story of mine has just been published in an anthology. 'Bitter in Sour' is the opening story in DARK DOORWAYS from the Prufrock Press. It's a nice looking book. 'Bitter in Sour' was one of the few stories I wrote secretly at work last year, when I was employed in a horrible shampoo warehouse! My story is set in Lebanon and is partly a tribute to my friend Safaa Dib. The female character (who is never seen) is called Safaa, one of my favourite female names. If I ever have a daughter I will certainly consider Safaa as a prime candidate for her name (together with Nuria, my other favourite female name).

The real Safaa has just accepted the challenge of translating my next Portuguese language book, A SEREIA DE CURITIBA. This is rather apt, as she appears as a character in the text. Safaa's blog mentions how the Portuguese newspaper Publico has already reported on this. Apparently this is one of the most renowned newspapers in Portugal and a three page interview and feature on yours truly has just been published in its august pages. (August pages in May?)... Hopefully this will lead to more sales of my book in Portugal. More sales mean more chance of my Portuguese publishers issuing more of my books in future. Already I am planning various books to pitch to them, including an omnibus edition of my three 'Tall Stories' novellas (the last one is not yet finished) and a brand new project, a tribute to Calvino based on the format of his INVISIBLE CITIES provisionally entitled IMPLAUSIBLE PLANETS.

I'm back in Wales but life has started to improve here. The weather is still awful. Rain is our main trading resource. We import it from the Atlantic Ocean and export it (in lower quality form) to England. But there have been one or two sunny days recently, not warm days but days with blue skies, and my social life has become more interesting, not necessarily as a direct result!

I am becoming more involved in local cultural events. I joined a drumming circle for a two hour bash in the park. I also attended a Pablo Neruda poetry night hosted by ALAS (Asociación Latinoamericana de Swansea). I need to do more work for them this year than I did last year! And after a break of nearly six months, I returned to the Dylan Thomas Centre for one of the 'Last Thursday' poetry nights. In 2005 I was a regular at these events, together with my friend Sarita. This time I read a piece that was designed specifically for live performance. I've never done that before and the response from the audience was gratifying. I was also invited to give a talk to a group of literature students at Trinity College, Carmarthen. Even though I'm not a natural public speaker, the talk went well and I enjoyed the experience.

In approximately two weeks I need to find a new place to live. I have been making myself more and more portable over the past year by clearing away a lot of possessions that are now useless to me. This process includes giving away books, but I still have far too many of them standing on my shelves. What is one to do about this, I wonder? My solution is to distribute them among many friends (if they are willing to take them) and maybe reclaim them some time in the future. We'll see. Moving house is supposedly one of the most stressful things that can happen to a person, but I don't feel particularly stressed about it, just slightly annoyed!

But minor annoyances will never wipe away the joy I feel at reclaiming my friendship with Lowri, my lost sweetpea. She returned from India a few months ago and we are back in touch and on good terms. She will always have a place in my heart and it was delightful to see her again after more than a year apart.

I have just been interviewed (in English) on Portuguese TV. One of the interviews can be found here:
http://www.tvviana.com/main.php
You have to click on the link that says "Exclusivo TV Viana: Rhys Hughes e a sua nova história da infâmia" .
I look quite sleazy on TV. Would you buy a used bottle of tequila from this man???

The reason I was back in Portugal was because of the Primeiro Congresso de Literatura do Alto-Minho in Monção where I was the main guest. Monção turned out to be a beautiful little town in a beautiful region of the country. The main square overlooked the River Minho and Galicia beyond it, with mountains rising in the distance. The Congresso was extraordinary: my hotel was paid for by the mayor and so were all my meals. I'm not used to this sort of treatment! I also met some beautiful Portuguese girls who I hope to meet again when I return (whenever that is!)

After Monção I caught a bus to Viana do Castelo, home city of my publishers, Pedro Marques and João Seixas, passing some beautiful scenery on the way. I wanted to do a beach walk all the way from Viana to Esposende. Most of the Minho coast is one long beach and this walk seemed feasible. My walk started well. The beach just south of Viana, the Praia do Cabedelo, is stunning, an amazing stretch of sand and dunes. Being there at sunset and then sunrise of the following day was incredible, though I had a very cold night in the open huddled in a derelict lifeguard's hut. As it happens my walk came to a premature end when I reached the mouth of a river after it had gone dark. I followed the river inland but no bridge was apparent and so I decided to turn back. Next time I attempt this walk I'll bring a tent or at least a sleeping bag!