Well life has been truly rubbish since I returned from Portugal... I have come to the conclusion that I am thoroughly disliked here in Swansea, simply for having talent and trying to use it. I can hardly believe I was standing in wonderful Sintra just over a week ago, and now I'm back in a place I can only describe as utterly vile. I need to get out.

I am going to give myself six months to make this move. I'm not sure where I'll end up, but anywhere else will be a start. I want to leave Wales and Britain completely, but that might not be possible for a long time yet. We'll see. London might be a stepping stone. Most of my friends are leaving or have already left for a variety of locations and it finally seems inevitable that I will join this exodus.

May 2007 is therefore my provisional date for my escape.

I understand why Byron was so impressed by Sintra. It's a truly amazing place. I first went there more than two years ago in the company of several Portuguese writers, including João Barreiros, but we didn't get further than the first restaurant in the village. Last Sunday I went with Safaa and we explored rather more of the surroundings. The following day I returned yet again and this time I climbed up to the Castelo dos Mouros and the Palacio da Pena, two of the most extraordinary buildings I have ever seen. The views were amazing, far up the Atlantic Coast as far as the Islas Berlengas.

My Portuguese trip is over far too soon. But I have some good memories to take home with me, including an origami lesson in which I learned how to make a crane (the bird, not the lifting apparatus) from a piece of paper. I plan to return to Portugal next year, maybe in April or May, and I'm already looking forward to that voyage. But first I have to fly back to London and then catch the bus back to Wales!

I arrived in Lisbon yesterday in the rain. It rained very heavily and the raindrops were even bigger and splashier than those that habitually fall in Swansea. The streets of Lisbon are all cobbled, and the pavements are narrow and full of people, lampposts, boxes of fruit and fish, cafe tables and chairs, etc, and the cars are very fast with very splashy tyres, and the trams are very large and appear around corners in a very unexpected, scary way. So it was hazardous walking through the rain to get out of the rain. Furthermore the roofs of the buildings all seem to extend out to a point that is also the midpoint of the pavements, so the rain pouring off those roofs makes gush-curtains on the heads of the unfortunate pedestrian who is forced into them by the obstacles placed before him... I got wet.

But today the sun came out and very nice it was too. I attended the Fórum Fantástico and read four short stories. Then I had a photo shoot and an interview for a newspaper (can't remember which one: but I'll find out). I'm only in Portugal for a week. I didn't meet any of the people in London I planned to meet, apart from Sarita, and I doubt I'll have time to do so when I fly back. Maybe next month? 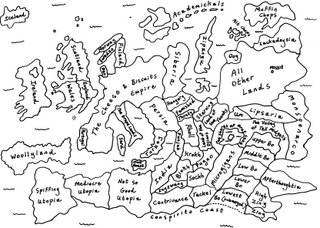 Every silver lining is wrapped in a big black cloud, and so it was for me, when my cherished pirate novelette was rejected yesterday, only twenty four hours after I submitted it... No matter. It will be published elsewhere (I'm sure) and in the meantime I managed to sell my most recent book, The Less Lonely Planet, to a new upcoming press, Humdrumming, whose senior editor is a former Emmerdale actor... I'm always delighted with all my books, in fact I'm particularly delighted with them, but with THIS book I'm particularly particularly delighted... It's so very daft! The supposedly-relevant map above was drawn after I finished writing it, and is almost completely useless, praise be!

I also sold another novelette to moutons électriques... 'The Old House Under the Snow Where Nobody Goes Except You and Me Tonight' has the longest title (so far) of any of my stories. It made the cover of Postscripts #2 a couple of years ago and now will be available in French. C'est bon, n'est-ce pas? Beaujolais nouveau! In France my surname apparently is Hugues. I like that, don't know why, but I do.

I have been looking after two parrots on behalf of my friends, Stuart and Monica. They aren't big parrots but little ones (cockatiels?) but as I like the word 'parrot' that's how I prefer to refer to them... Parrots are associated with pirates and I've just completed a 17,000 word novelette for a pirate-themed anthology currently being edited by Jeff VanderMeer... I have written a lot of stories featuring pirates in my career, so it seemed only natural to gather all those previous rogues together in one sea and have them fight it out, to see who's best! I've never had so much fun writing a story!