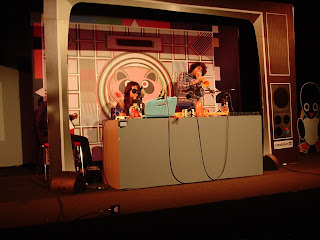 Courtesy of Hannah, my lovely housemate, I went to the Hay-on-Wye festival for the first time in my life on Saturday. The drive in itself was a memorable experience, at high speed down twisting roads with the light fading and gloomy clouds massing on the horizon. At one point I felt like the passenger in John Hawkes' Travesty but then I remembered how pretentious it is to identify with characters in underrated novels, so I stopped. Just in time...
We attended a gig by Gruff Rhys, the Super Furry Animals fellah, and it was a thoroughly excellent musical experience. Gruff played songs from his catchy and imaginative Candylion album, including a stripped down version of the superb 'Skylon', but the highlight was the avant garde coda to 'Cycle of Violence' that went on for ages and ages and used all sorts of strange and cunning sound effects. It only takes two musicians to make a big sound. I'm a recent convert to the Super Furry Animals. I originally assumed they were just another Welsh rock group like Catatonia or the Stereophonics, but in fact their music is closer in spirit and tone to Gorky's Zygotic Mynci or even the 'Canterbury Sound' of the early Soft Machine, Kevin Ayers or Caravan... Elaborately arranged, multi-layered, whimsical soundscapes. Truly nice!

Through the beating rain we drove away and ended up in Cardiff where we stayed with two people named Andy and Summer. The following day we sneaked past the barriers of the Opera House and explored the deserted building on tiptoe. It was interesting to view the impressive interior in silence. Then we heard footsteps -- official rather than ghostly -- and I abruptly learned how dead chivalry really is. Andy and myself exchanged glances and suddenly we bolted for the exit, leaving Hannah to her fate, but we jammed together in the doorway like a pair of custard-bloated cowards... Serves us right!
# posted by Rhys Hughes @ 4:15 PM 2 Comments 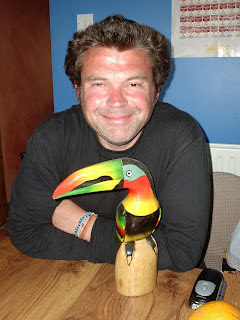 I was feeling a bit frazzled last week but I'm much better now. I don't know how a man who does so little can get so tired. It's a mystery! But maybe I'm being artfully modest and perhaps I am actually a very hard working sort of fellow. No, that's not true... I think that lack of sunlight has something to do with my recent lassitude. I need to be sizzled for a long time, something that Welsh summers aren't often capable of doing...

Hot on the olive-and-feta heels of my Greek book, two more of my books are ready for the printers... The second edition of The Smell of Telescopes is due to appear soon in Slovenia, while the Spanish edition of my Infamy book is scheduled for publication next month. My Spanish book has a very strange cover that can be viewed here. Lots of gnomes, I don't know why, malign gnomes on the march...

Both books were slightly delayed by my inability to provide my publishers with a decent author photo of myself. I tried again and again but there was always something wrong with the photos I sent. The problem is that I know amost nothing about photography. My recent attempt to take a photo of two ducks on the beach at night is truly laughable and can be viewed with suitable derision on my flickr account.

First of the Eight!

The t-shirt pictured in my previous entry is not as it will appear for real. The real t-shirt will include a picture of an asteroid and will be even more collectable, not to mention more comfortable. It will also be warm in very mild blizzards...

I went to the beach with Miss Frisbee Girl last night and the weather was most peculiar. Pockets of icy blowiness battled for supremacy with pouches of warmth, black clouds scurried in different directions, ducks mistook the sea for a pond... It went dark and then bright again halfway along the beach, as if someone in the sky had moved from one room to another, switching lights on and off as they went. The previous day was even stranger. Thick creamy clouds poured over the Mumbles peninsula like froth from a gigantic overspilling cappuccino machine...

I've recently heard that I've just been published in Greece by Polis Editions... Therefore there was no winner of the competition I arranged a few blog entries ago. Sorry! NEA ΠAΓKOΣMIA IΣTOPIA THΣ ATIMIAΣ is a customised version of my New Universal History of Infamy... It includes several stories not yet published in English and a story especially written for a Greek readership (a sequel to Borges' famous 'Pierre Menard, Author of the Quixote' set in Athens).

The translator is the renowned scholar KYPIAKIΔHΣ AXIΛΛEAΣ (Achilleas Kyriakidis), who is also the translator of Borges, Calvino, Queneau and Perec. Click here to get a glimpse of the cover and to check out more Polis titles... 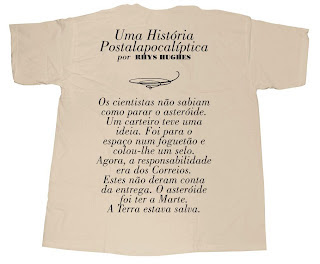 Those inventive fellows at Livros de Areia have concoted a scheme that involves printing extracts from their books on t-shirts. They plan to create a t-shirt for each one of their writers. My shirt features a very short story (originally a mini-saga) about an asteroid and a postman... This reminds me that I need to get at least one t-shirt printed for my forthcoming sponsored bicycle ride, something along the lines of LISBON TO BARCELONA (WHAT A FOOL!)

I have been invited to the Spanish National SF Convention as a 'guest of honour' in Seville at the start of November. Not long after I was first published (way back in 1992) I vowed never to attend a literary convention as a member of the public. I would only go as a GUEST OF HONOUR. Such arrogance! But my patience has paid off... (The fact I have attended one or two small conventions in my time as a plain chap shouldn't be allowed to weaken my smugness -- and in fact it doesn't).

My talented and lovely Macedonian friend, Brankica, has appeared in a music video that can be viewed here. She is the drummer. My friend Huw Rees is also a drummer but he's not as sexy.

The "Wall of Signed" technique

Things haven't been too good lately. I've had a really bad two weeks -- I won't go into details -- but I'm going to try to pull myself together and knuckle down to some work again. I have a novel, four short stories and two articles to write. I have to get to grips with the music that will accompany my Sereia de Curitiba book. I also have to sign the signature sheets for my Crystal Cosmos, all 726 of them! This isn't a task I relish... I picked up a parcel from the Post Office on Monday and I was excited until I opened it and saw all the sheets of paper that need to be signed.

In one session I can sign 200 sheets easily enough, but after that things start getting weird. The task of signing one own's name again and again creates all sorts of feelings -- boredom, despair, an unjust sense of narcissism. After the 400 mark is reached, the signer enters a trance, a travesty of a genuine mystical state, which lasts until number 600. Then blisters, fever, madness take over! The publisher who inflicted this task upon me is none other than the redoubtable Pete 'Spectre' Crowther -- infamous exponent of the 'Wall of Signed' technique...

Sad to say, the introduction to my Crystal Cosmos was written by Michael Bishop, whose son Jamie was one of the victims of the Virginia Tech Massacre. What can one say to someone who has lost his son in such circumstances? My own problems look extremely small in comparison.

I also have to decide what I'm going to do with the summer. My new relationship hasn't worked out, for reasons that have nothing to do with our suitability as a couple, and so my plans have changed. I was intending to leave for Portugal early in June and spend two or three months cycling across Spain before returning to Swansea. My book launch in Lisbon seems to have been postponed until maybe October, and I also have a different book launch in Madrid in November, so it makes more sense to delay my cycle ride until then. But I don't want to stay in Swansea much longer, not without my girlfriend, so the obvious solution is to go travelling... But I don't want to blow all my savings before my Portugal/Spain trip. Decisions, decisions. I am at a loss what to do.