So the British government now plans to spy on its citizens via Facebook and other social networking sites. When will this unamusing insanity end? Only when the UK is a fully-fledged police state, I imagine. The hyper-exaggerated threat of terrorism continues to be used as a pathetic excuse for the erosion of our already miniscule freedoms. Today I walked past a poster encouraging people to report their neighbours for suspicious activity. The poster features a bin full of empty bottles with the tagline "These chemicals won’t be used in a bomb because the neighbour reported the dumped containers..."

How idiotically paranoid is that? When I was a teenager, making explosives was a hobby of mine. I blew up my garage. I blew up a school classroom. But I was interested in rocketry, not terrorism. Explosives don't necessarily have anything to do with bombs. But that's not the point. Encouraging citizens to snitch on their neighbours is an offensively lazy way of creating a dictatorship. The Gestapo worked in a similar way. Far from being a ruthlessly efficient uber-organisation employing trained agents and meticulous spies, it was actually a small scale ramshackle group of shoddy administrators who relied on gossips and curtain-twitchers to 'uncover' supposed enemies of the state.

Our government wants to turn its own people into a whimpering mob of tongue-wagging sissies. I refuse to comply. I'm a man, not a jelly-eunuch. What happened to the vision of Britain we were sold when I was a youngster? What happened to courage, honour and refusing to bend the knee? And whatever happened to the idea that a government is the servant of its people, in other words our servant, and that it's supposed to do what we tell it, not the other way around! The government is NOT there to do what's 'best' for us but to do our will, whatever that will might be, even if it's something completely irrational or self-destructive. That's why we pay it. 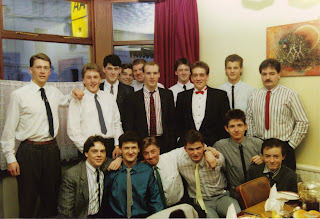 Having finished writing Twisthorn Bellow I didn't see the need to feature more monsters on this blog. However, sometimes monsters are created accidentally. Here is a good example of that. Recently an old schoolfriend by the name of Gerraint Oakley got in touch with me. I hadn't seen or heard from him for about 18 years -- entirely my fault, as I didn't keep in touch with any of the Porthcawl crowd from my youth -- and he kindly offered to email me some photos of those long lost times. I don't have any photos of that era in my life, so it was intriguing to view the first one he sent me, the one that appears here. I eagerly await the others!

I have absolutely no idea where this photo was taken, nor what the occasion was. Gerraint is the chap in the red dicky bow, a much malinged item of neckwear that originated among Croatian mercenaries of the 17th Century. As for myself, I am merely a disembodied head in the back row. The chap with the black hair in front of me is Alan Griffiths, and standing next to him with a red striped shirt is Gareth Hill. Gerraint, Alan and Gareth were the closest friends of my younger self. I'm delighted to be back in touch with Gerraint and I plan to meet up with him soon in Porthcawl, a place I haven't even visited since 1997! 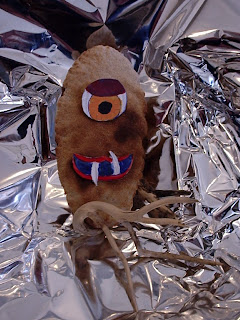 My novel is finished at last! When I say "at last" I actually mean "already"! The whole thing took about 50 days from beginning to end. Total wordcount is approximately 72,000 words. I just need to tidy up the manuscript, correct any discrepancies and paradoxes that weren't intended (every novel can benefit from some deliberately defective logic if it's applied carefully) and do other general editing duties. Then I'll be free to submit Twisthorn Bellow to a publisher. I have a Canadian publisher in mind for this. I'll give him first refusal and if he doesn't like it I'll pass TB onto my agent. The previous sentence might be considered medically inappropriate.

A few weeks ago the mighty writer Philip José Farmer died. He had reached the grand old age of 91. PJF was a major influence on Twisthorn Bellow and in fact he has a cameo role in every chapter of the book, even appearing at the climax in cowboy guise mounted on a giant hopping foot on his way to the lost city of Opar. While writing my novel I entertained a secret fantasy that PJF himself might get to read the finished product. Alas, that can't happen now... PJF was a literary genius. Clever, outrageous, hilarious, exuberant: his work was utterly original and yet firmly grounded in the most colourful pulp traditions. 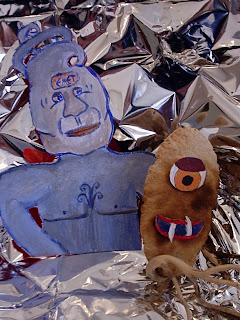 Meanwhile, the monster in these pictures is the diabolical pitta bread cyclops known as Snagtooth Toasta. To make him I toasted him lightly in my new toaster and balanced him on a piece of driftwood and arranged him against a backdrop of silver foil. Only joking: he's a real monster! We see him in the company of Twisthorn Bellow but they don't really become friends. At the end of the novel, the French government succeed in their dastardly scheme of invading Britain by compressing all of France into a parcel and posting it across the English Channel. When the parcel is opened, France pops out and squashes Britain! 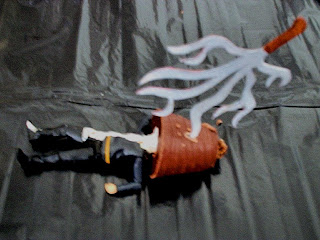 This photo shows the dramatic death of arch-villain République Nutt at the hands of Twisthorn Bellow in his subterranean lair far beneath Strasbourg. Because it's bad form to give away the ending of my novel in such a casual manner, I'm pleased to report that this isn't actually how that fiendish chocolate-headed rascal dies. We see Monsieur Nutt impaled on the golem's favourite weapon, the kpinga, a throwing-sword typical of the Azande warriors of north central Africa, but in fact Twisthorn deals with his foul enemy just with his bare knuckles. A picture may be worth a thousand words but often those words are fibs! 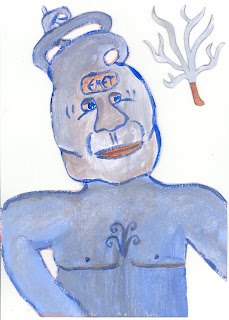 So far I have featured many bad monsters on my blog but none of the good ones. Bearing in mind that 'good' is a highly dubious term in the context of the unfolding story, here is the main hero of the action, the golem Twisthorn Bellow himself, together with his kpinga. This portrait was made before he exploded, obviously. He doesn't explode until the end of the final chapter, which I guess would be another spoiler if it wasn't such an inevitable outcome right from the beginning. I'm working on that final chapter right now, so the entire novel should be finished in a week or so, meaning I'm currently writing faster than I've done since the year 2000. 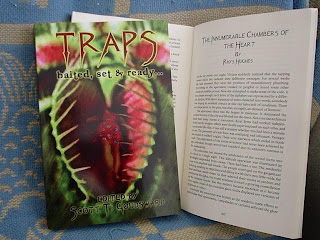 I have just received some copies of an anthology that features my story 'The Innumerable Chambers of the Heart'. The title of the anthology is Traps and rather unsurprisingly it is themed around the concept of being trapped. My copies were strangely mailed to the house of the drummer Huw Rees and when I went to collect them, a mouse ran into his house from outside. My story isn't about mice, but it does involve people trapped in a stone maze that is actually a giant apartment block built over a subterranean volcano that erupts. There always has to be something that explodes, doesn't there?