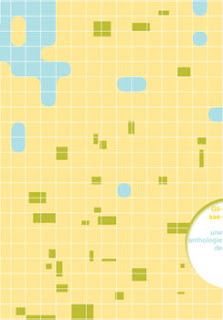 I think I've just been published in France. According to this website my story 'The Old House Under the Snow...' has appeared in an anthology entitled Glissements, une anthologie de troubles topographiques. The book is a limited edition, apparently. I'm pleased to see that the mighty John Crowley is one of the other authors. There's also a contributor by the name of Harry Morgan, but I don't think he's the same fellow as the former Rag Foundation bass player. That seems too improbable. The publishers didn't tell me I was going to be included in this anthology and I don't have a copy, but that doesn't matter. I'm just glad to be published in France again!

'The Old House Under the Snow...' is probably the most successful story I've ever written but it wasn't an immediate hit. I originally wrote it in 2002 for the first Tartarus Strange Tales anthology and it was rejected. Then it went on to be printed in many places in several languages. Coincidentally, the story I finished writing this morning ('The Phantom Festival') was also intended for the latest Tartarus Press anthology, and it may even end up there, but I suspect its true fate lies as the title story of a forthcoming collection. I received a contract for that (as yet untitled) book a few hours ago. The contents haven't been finalised yet, but they hopefully will be soon.
I've just finished proof-reading my Mister Gum novel. It is now scheduled for a late August release... And I've just finished proof-reading a new chapbook that might be out any day now, my first chapbook for five years...
Other things have been happening, bad as well as good. It would be churlish of me to withhold news of my failures. After all, even the people who dislike me need to be cheered up every so often... It seems I won't be appearing in the same book as Milorad Pavić after all, thus my joyful announcement to that effect back in May was premature. The editor who accepted my submission was overriden by the publishers, the narrow-minded Rodens (about whose integrity and aptitude I have long nurtured doubts). I'll report my other failures as they come in -- my gift to those who mistakenly believe my existence offends them.
# posted by Rhys Hughes @ 10:40 AM 0 Comments 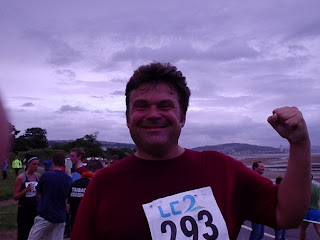 I have the thickest hair of anyone I know. I don't mean that it can't do sums or thinks anchovies are vegetables. I mean thick as in luxurious -- but without the luxury. Last Tuesday I did the 5K charity run and came 21st -- from last! My time was an appalling 32 minutes 44 seconds, but next month I'll do better. Maybe. I'm just annoyingly glad and unreasonably proud I finished at all. But if I'd had a haircut before the race I might have overheated less and run faster. These photos contrast my head in two different cycles of its general existence, pre-scissors and post-scissors. In the latter state I look a little like a wannabe dictator. In an ideal state I really would be a dictator. But a benign one. Sometimes.

I am now working on my 496th story. It's a ghost story devoid of puns or wordplay of any kind, and it's about a music festival for ghosts. I even intend to resist the temptation to make jokes about 'soul' music. I began it a few years ago but kept abandoning and returning to it, a working method that is typical of me. Now I need to apply myself more rigorously and finish it before the end of this month, as I want to submit it to the new Tartarus anthology of strange tales. The other option is that it will appear in a new collection next year, maybe as the title story, which means that the book will be called The Phantom Festival. But this remains to be seen, like so many other things. 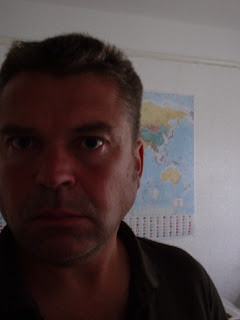 496 is an interesting number. It's a 'perfect' number, in other words a positive integer that is the sum of its proper positive divisors. Perfect numbers are so rare that between 0 and 1000 there are only three examples, namely 6, 28 and 496. This means that the only stories I'll ever write that correspond to perfect numbers are: 'The Fury Machine' (from 1991), 'Landing' (from 1992) and 'The Phantom Festival (hopefully finished in 2009). Never again will I write a story that correponds to a perfect number. Sniff! I'm sure I'll get over it. Easily.

Had a nice pre-release review of Twisthorn Bellow from Publisher's Weekly. Naturally enough, I hope this is just the start... 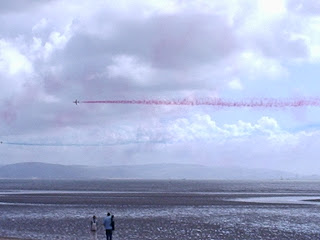 We went to watch the Swansea airshow last Sunday and some interesting aeroplanes and helicopters performed stunts for us over the bay. Adele and I chose a good vantage point on the beach while the aircraft passed directly overhead. My knowledge of planes isn't particularly good but I think the display included a Lancaster, a pair of Spitfires and a Mustang. I might be wrong about that. There were also modern jets, and the Red Arrows put on a good show, but the Eurofighter Typhoon was even more impressive, extremely loud and fast and very maneuverable. That was followed by wingwalkers strapped to the upper wings of what might have been Boeing Stearman biplanes. Again, I'm not sure. The only plane I've ever actually piloted was a Piper Warrior but there's something extra-special about biplanes with open cockpits and radial engines. I want one! 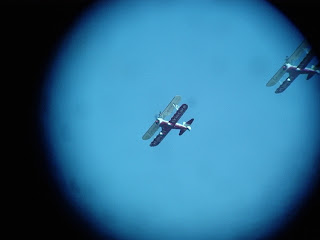 Back to earth, I managed to run 5K last week without pausing, which means I've finally returned to the same level of fitness I had three years ago. So I feel physically and psychologically ready for the 5K charity race later today. I don't expect to do resoundingly well and I doubt I'll finish the course in less than 30 minutes, but my main concern is not to come last. I'll worry more about my timing in next month's race. I'll report on my triumph (or shame) in my next blog post... 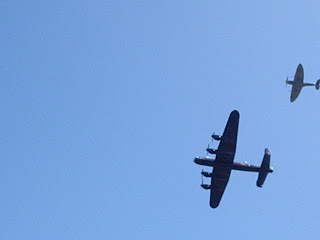 Now to writing: I've nearly finished my 493rd story. My earliest surviving story dates from 1989, exactly 20 years ago, so there will be a nice symmetry if I do get to the 500 mark this year. What else? Two new reviews of my books have recently appeared, for The Smell of Telescopes and Engelbrecht Again! Reviews have been rather scarce in the past year or two, so it's nice when they crop up out of nowhere.

Meanwhile, Adele's allotment is looking more amazing than ever and so I have blogged about it here...

Launching a Book, Shelving a Ship 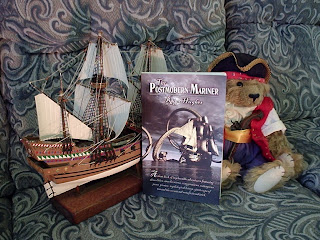 Here's a mildly old photograph to illustrate the fact I'm about to organise a literary event for August here in Swansea. When The Postmodern Mariner was published last summer the plan was for a beach-party launch but circumstances conspired to cancel that happening, so it seems only proper to have another go, but to make the second attempt bigger and better than the original conception... What I'm now planning is no longer just a relaunch of The Postmodern Mariner (and the plugging of my other new books) but a gathering of many writers with their own works to promote. There will be readings and books on sale and other stuff and the pirate-themed beach-party will come after all the business. I'm hoping there will be seashore duels and walking-the-plank incidents and that it'll be a very photogenic and bloggable afternoon. Details will be propagated when they are available for that purpose...