Delays are part and parcel of the publishing world. The parcel part often gets lost in the post; the part part sometimes doesn't get put together into a whole. In other words, if an author writes a book (quite a feat in itself) and manages to convince a publisher to accept it (an even bigger feat) he shouldn't automatically exp 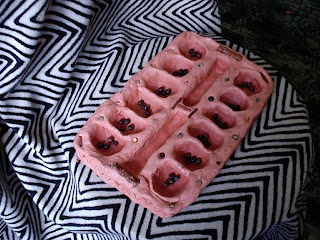 ect his book to hit the ground running just because he has two feats under his belt. Feats get tripped and bodies of work can sprawl. This is perfectly and annoyingly normal. What can one do about it? Nothing much.

I'm still waiting for Mister Gum to appear. It was originally slated for March, then the publication date was moved to June, then it was re-scheduled for the end of August. Which is now. It might actually be out and winging its way towards me at this very moment. I don't know. I should know by this time next week. Or maybe not. Twisthorn Bellow has also been postponed and won't come out until next March. This is because of a personal issue I hav 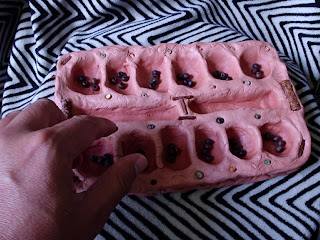 e with hyphenation. More of that some other time. The relaunch of The Postmodern Mariner has also been delayed and probably won't take place until October. More time to publicise and promote these events: that's how to look on the bright side.

On the other hand, things that are put off for years or decades can finally happen spontaneously. Since the late 1970s I have wanted to make a mancala board. I taught the rules to Adele last week and she instantly suggested we make a board from clay. So we did. Here's the result. It works beautifully. The version of mancala we play is called oware. In Africa I played oware and lost every game I played; Adele also has acquired the habit of regularly beating me. I'm just not very good at it. One day we might progress to bao, but I'm not sure we can afford the amount of modelling clay that would require. 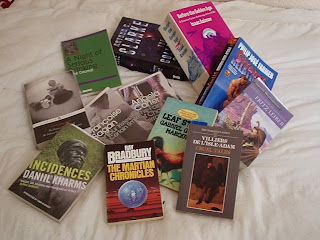 I am reading too many books at the same time. I dream of the day when I am only reading one book at a time. The situation at the present moment is the worst it has ever been, so I decided to photograph all the books I am reading in a pile together, to shame myself. Here they are. I am absolutely forbidden from adding more books to this pile.

I have finally started work on my 500th short story! When it's done I'll be exactly halfway through my writing career. Phew! It has taken twenty years to reach this stage. My earliest surviving story ('Raindancing') dates from August 1989, and now here I am in August 2009 working on number 500... As I always wanted my 500th to be a special story, I've decided to make it a novelette and also to use an idea I have been carrying around in my head for a very long time. The photo below shows me thinking about how best to do justice to this idea... 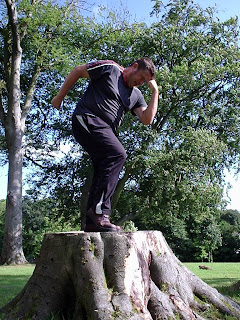 I wanted to be an author from an early age and started writing fiction when I was 6 or 7 years old. Obviously the stories I produced back then weren't very good, but occasionally I had a viable and interesting notion that was beyond my ability to adequately render in prose. Some of those notions I never gave up on and I still plan to commit all of them to paper. Perhaps my favourite concerns a voodoo magician who creates a wooden globe of the world from leftover voodoo dolls and accidentally sets it on fire, thus precipitating the worldwide 'impossible inferno' of the story's title.

That's the tale I've just started working on, more than thirty years after its original conception! I think it will turn out to be one of my wildest adventure stories. But now I'm getting worried. I'm Welsh and I'm almost at the midpoint of my stated goal. If my entire life's work is regarded as a mountain, then I am almost at the summit, preparing to plant my flag before beginning my descent on the other side. 500 stories to the top; 500 back down. But the Welsh always fail just before the halfway stage... Am I fated to die before the 500th is done? That's the sort of pathetic luck a Welshman would have.

If I was American, Russian or German I would undoubtedly reach my target of 1000 stories without a hitch. If Italian or French, I might reach 987 before dying. If Dutch, Irish or Spanish, 830. If Moroccan or Greek or Finnish, 725. If English, 682. If Portuguese, 590. But I'm Welsh. It's almost a certainty that I will expire at 499. It's too good a chance for fate to miss. I'm Welsh, remember!

"Duw duw bachgen! There's a Welsh writer, see, and he's working on a project, it's 1000 stories all interconnected and it's ambitious and clever, mun, but he's Welsh, so he can't be allowed to finish it or even reach a significant stage along its length. Better to get him killed in a car accident or from one of those embolisms, see, so he remains obscure and doesn't make difficulties for the future definition of his culture..." 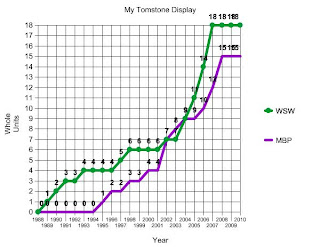 That was one of the angels who watch over Wales talking... At least I have already designed a display for my tombstone. I don't want words. I want a graph. This one. I can't reveal the meaning of the lines yet, but clearly they are both plotted against time (in years) and quantity (in whole units). The two instances where they cross should have been noticeable to me at the time but ironically weren't. Both lines can be extrapolated into the future and might even level off before my death. That all depends on how lucky or unlucky I am... 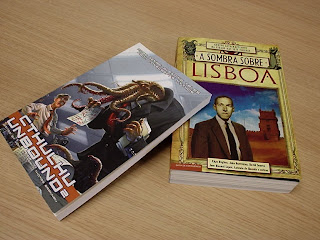 I write only in English but sometimes my work appears in other languages first. For instance, my story 'Abomination With Rice' has just been published in the second volume of the Cthulhu Unbound anthology, but its first appearance was in Portuguese in the Sombra Sobre Lisboa anthology back in 2006. That's not an uncommon occurrence for me. Both anthologies seek to perpetuate and extend the so-called Cthulhu Mythos. Because I'm not really a Lovecraft fan, my own contribution to the mythos is tongue in cheek, but the tongue is forked and the cheek sunken. The real villain of my story isn't a cosmic octopus god but a gentleman by the name of Pedro Marques. The real Pedro Marques isn't a villain but a decent chap who recently gave me 200 euros. Elsewhere I have proved to my own satisfaction that he is actually Lord Greystoke, the original Tarzan. These photographs show both anthologies. I wanted a Lovecraftian background but couldn't find one in Swansea. In Swansea, it's the foreground that's Lovecraftian... 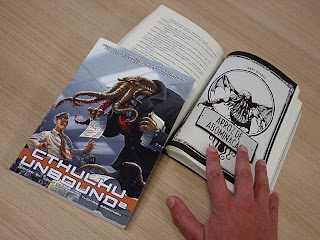 I am currently working on my 499th story. It's set in Albarracín, one of the nicest villages in Spain. The first time I went there, back in September 2007, I already guessed accurately that one day I would write a cycle of short tales inspired by it. I don't know how many tales will form this cycle. Maybe they'll constitute a chapbook, maybe not. If they do, I already have a title for the sequence -- Tucked Away in Aragon. The first story in the cycle actually takes place in the sky above the village, with the clouds looking down and trying to see coherent shapes in the formless mass of seething humanity below. It's all just an optical illusion, of course.
# posted by Rhys Hughes @ 3:21 PM 1 Comments 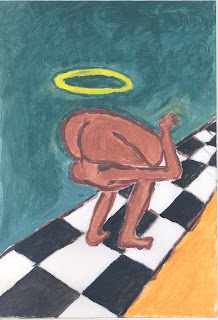 This is my latest painting. I call it 'The Writer' because it clearly depicts a typical writer in a typical pose. I am thinking about printing many copies of this image and making a collage and calling the result 'BFS' (anyone who doesn't understand that reference doesn't need to understand it...) It should be unnecessary for me to repeat that my art suffers from a lack of technique. I'm a bloody awful painter, yet that condition is surely preferable to being good but neglected, like Jože Tisnikar.

My story 'Castor on Troubled Waters' popped up on Podcastle yesterday, so now you can listen to my work as well as read it. Not recommended for dancing, though. This story, of course, is the first tale in my book, The Postmodern Mariner, and it is set in Porthcawl, and it features pirates, beer, chips and volcanoes... Here is the link to follow for that, if you care to follow it. Follow, follow, follow! Or don't.

This is only the second of my stories to be given the audio treatment. The first was my absurdist ghost story 'Journey Through a Wall' which appeared on a Christmas compact cassette for the blind many years ago (back in 1998? I don't remember). I think that cassette was a TDK D-60. I might have lost it, I might have kept it, I'll have to search for it. Maybe it's at the bottom of a box somewhere.

This morning I finished writing my 497th story. It's the last instalment in a linked cycle of tales about sentient planets, moons, constellations and galaxies. This story cycle will form the core of my Implausible Planets book and will be surrounded by an accretion disk of other miniature story cycles, but when (or whether) that book will be finished (or published) I can't yet say, because I don't know... Already I have started my 498th story, a piece about a world where coming second in any endeavour is admired, but coming first or third or any other number is considered a sin. The story is called 'Aldrin's the Buzz Word'.