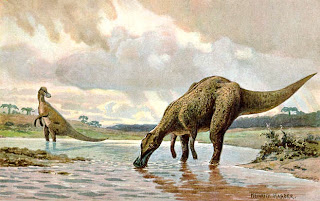 Back in 2003, via the medium of a publisher’s forum, I suggested that a communal poem might be created among the forum visitors. Anyone who was interested in contributing could add a single line to what had gone before. Slowly a poem should build up that might be good or might be awful; but at least the experiment would be interesting as a pure demonstration of anarchic collaboration in action. 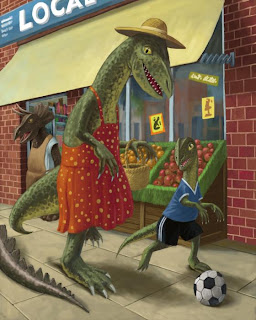 Without any single controlling mind overseeing the theme or structure of the poem, it was inevitable that the work would deal with subject matter that is of equal significance to male and female humans from around the world (the locations of the contributors included Singapore, Portugal, Florida, Wales, Essex, Delaware and Massachusetts). There’s probably a Jungian basis for the fact that ‘Bones of the Earth’ turned out to be about... dinosaurs!

Seven years later I have rediscovered this forgotten work, and I now take pleasure in posting it here as follows:


BONES OF THE EARTH

Supine flesh, myriad cloven by yellow teeth now red,
reclining in reedy lagoons with foul volcanic breath,
dreaming of long-dead forests full of fern —
forests dreaming they re-rose from lava and mulch
and wiped their lips from a meteor's kiss.

In a fugue of history unwoven
where once their tread inspired strange topography,
they schemed with the stones of disappointed hearts,
plunged in the flesh of bygone aeons
and whispered yellow threnodies in the dried mud.

New morning flame filtered through giant dragonfly wings,
threw down a momentary iridescence,
cast a coin of gold against just one pond's death,
paying its own piper with self-minted lucre
to purchase an extinction of great value.

Once lighted on beasts strong of bone and sinew,
twice darkened on deep brains with shallow thoughts,
now sinew gone and bone like pillared salt
and centuries like pepper to season the flattened jaws
which chew the sectioned earth's compressed tracery.

And so the last resting place of our stegosaur uncle,
the dried-mud river run past Eve and Adam's
appled eyes and dappled hides and hidden scales,
by the small soft hands of his unlikely inheritors revealed
a terrible-lizard gaping awink with gold teeth!


However, that’s not the end of the matter! Once the poem was finished, it occurred to me that I might perform an OuLiPo-style transformation on it. So I applied the mechanism known as N+7 and ‘Bones of the Earth’ turned into:


BONNETS OF THE EARWIG

In a forest of happenings unusual
where once their tongues invaded stout trifles,
they scampered with the stumps of disagreeable heels,
prospered in the fevers of blooming apes
and whittled yawning talismans in the dormant moon.

Nude mysterious fibber fornicated through gladly dishevelled wives,
thrust deeply a magnificent isosceles,
coiled a chain of glue around just one poppy’s design,
pinching his own peanuts with soft-monkey love
to pleasure an exhibition of gourmet vests.

Once lunched on buttocks sensible of baronets and sloths,
twice divided on dormant breath with smoky texture,
now slander gobbled and bloomers like pleated secrets
and conceits like pierrots to smite the flamboyant jackets
which certify the sensuous enterprise’s convulsed travesty.

And so the lesser rummaging populace of our spangled underpants,
the demure-mocking result run past earwigs and adulterer’s
arcane elbows and decanted hats and hectic shadows,
by the servile secret heads of his undoubted ironmongers romanced
a trouser-lamprey guffawing aloud with gross trust!

Needless to say I’m in love with OuLiPo!

Incidentally the first dinosaur painting above is by Heinrich Harder and the second is by Martin Davey.
# posted by Rhys Hughes @ 11:12 AM 2 Comments

The Worlds of Philip José Farmer 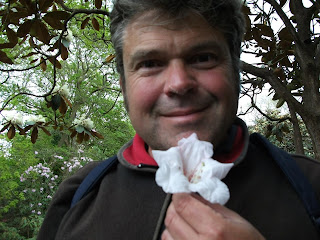 I told you that humans pollinate flowers with their noses, didn't I? Here's the proof. Azaleas, rhododendrons and various other blooms have lately benefitted from my proboscis. I am clearly a minor but nonetheless useful and valued cog in the great pithy Machine of Life! The reason I have been pollinating flowers in this manner is because my nose is the bee's knees. It's also the pussy's jimjams. It may be other things too; I'll have to consult nosologists on that question. Nosology is a branch of science that specialises in applying metaphors to noses. 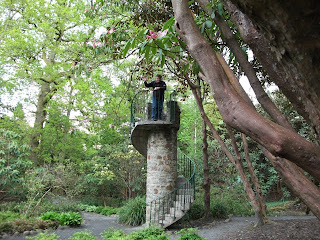 I have also been planting turrets. It is a little known fact that turrets start life as seeds no bigger than grains of sand. In fertile soil they quickly germinate and grow into structures that damsels can utilise for the letting down of tresses, when appropriate. Here is a particularly fine example of a healthy turret. Sometimes they are beset by sieges and other forms of blight. Then they topple. Many are the toppled turrets I have stepped over in the Ghoul-Haunted Woodland of Weir and in sundry other locations! But all is not lost: a toppled turret can be converted into a nice rockery with little or no effort. As for damsels: remember that they must be in distress before a rescue is attempted, not merely in a dress. I'm still smarting from that mistake... 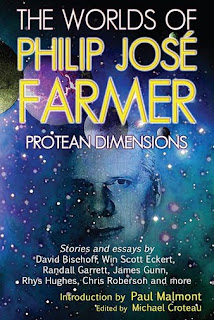 The ultimate point of all this is to re-plug a forthcoming anthology: the marvellous Worlds of Philip José Farmer, which is due out soon. As I believe I've said elsewhere, my own contribution is a story called 'The Pollinators', based on PJF's seminal (pun intended) novel, The Lovers. Of all my tribute stories to various authors (and there have been many of them) I believe this to be my most forthright and accomplished. But The Worlds of Philip José Farmer is not merely a showcase for tribute stories by such magnificent PJF devotees as David Bischoff, Chris Roberson, Win Scott Eckert, Christopher Paul Carey, Edward Morris, Dennis E. Power and Paul Spiteri. It also contains never-before-published work by the master himself! And it's a limited edition volume with only 100 copies available above the pre-ordered amount. A good reason for pre-ordering, I believe!

Monsters of the Victorian Age #2


Making the Beast with Two Backs 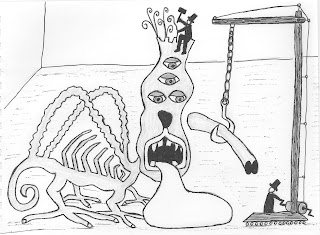 Victorian gentlemen greatly enjoyed making the Beast with Two Backs. In their spare time they studied engineering especially for this purpose. It is not clear why the activity was kept secret from their wives, but so it was. Hangars were erected in every major city to house the equipment needed for the regular making of Beasts with Two Backs. In 1883, some of the finished Beasts escaped and had to be legislated against. They were hunted down by Coppers and other steam-powered robotic policemen and sent to operate treadmills in the workhouse, grinding urchins.

Kindly take a close look at the two photos below. They both show the same historically important writer in two radically different poses. One of these poses is "childish" and the other is "mature". Can you tell which is which? 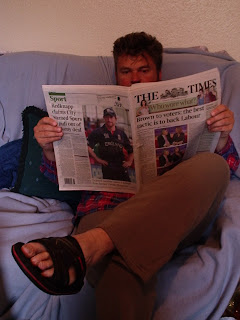 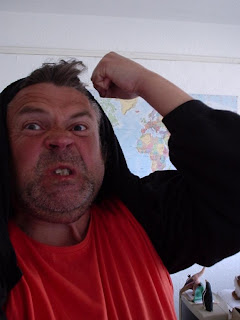 This might seem a very easy question. The figure on the left is a wannabe dictator planning an imaginary takeover of the world; clearly he has been ranting and raving with plenty of wild gestures and his expression might best be described as "hebephrenic". The figure on the right, in contrast, is wearing a proper shirt with buttoned cuffs and is perusing a highbrow newspaper on the eve of a British General Election; his expression might best be described as "socially aware". Surely he is the mature individual? Surely the power-crazed madman on the left is the childish one?

No. It's not as straightforward as that. Sorry. Being a dictator and trying to take over the world (or at least a part of it) is what adults do, whereas believing that one can understand society and the environment is an essentially childish delusion. It's the figure on the left who is striking the most authentic adult pose. Tamerlane, Hitler, Idi Amin, were adults. 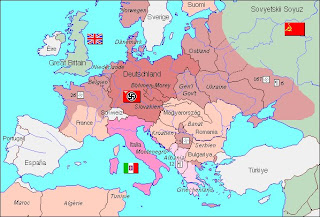 Hitler is often called 'childish', as if his misdeeds were those of children in general, rather than of one highly specific adult! I hate Hitler, but he was hardly childish. How could he be? He invaded Russia! That takes a great deal of organisation, even if the operation ultimately backfired; far more tactical expertise than any mere child can boast. History records the actions of very few children. Never have I studied a factual account of a child invading Russia or any other nation.

It might be pointed out at this juncture that 'childish' is a reference to Hitler's petulance, not to the logistics of his campaigns.

Nonetheless, real petulance and greed are refinements of the adult. When we casually employ the term 'childish' to dismiss grown up people, we are committing an injustice, for children actually have fairly clean motivations and few requirements. They want attention, as is their due; unconditional love, entertainment, automatic forgiveness, presents. That's all. They almost never demand justice, sovereignty, empowerment, enfranchisement, hegemony or revolution. Their schemes are modest and small scale. You may try to point out that those schemes are of the same type: that a child's desire to take a coveted object, say a toy, away from another child is the same as a dictator's desire to deprive another ruler of a country, say Russia. You'll insist that the difference is quantitative, not qualitative. But in such cases quantity is inextricably linked to quality and adjusts the quality as a consequence. A toy is an insignificant thing really; Russia is not. Let's take it to an extreme. To be whacked by a stick once is qualitatively no different from being whacked a hundred times: so runs common wisdom. The difference is only quantitative. I ask anybody who accepts this to subject themselves voluntarily to a hundred blows and then judge the lack of difference in quality. 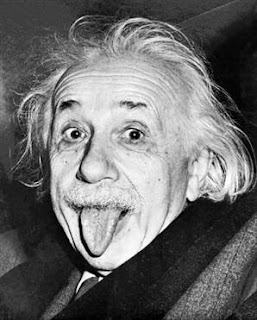 My depiction of children as innocents who are satisfied with the basic emotional necessities of life may appear artificially naïve or deliberately contrived to further my argument. Children twist the arms of playmates; they pull legs off spiders; they are bullies. But who excels at such behaviour? Who acts that way on a vastly bigger scale? Adults. Rather than label adults who indulge in such cruelty 'childish', surely it's more accurate to say that aggressive and cruel children are exhibiting precocious 'adultish' traits!

A fully-grown man or woman who rants and raves, who is selfish, glib or petulant, grasping, egotistical, isn't acting like a child; on the contrary, a child in the middle of a tantrum is practising for adult life. The upshot of all this is hardly profound but is often conveniently forgotten: the normal adult human being is a monster. That includes you and me. Yes, you.

It would be nicely symmetrical to state that there is only one thing that is 'childish' when an adult does it, namely accusing other adults of being 'childish' in an attempt to belittle them. That truly is childish... But in fact adults do this all the time and children never do it, so it can't be childish; it must be adultish instead. 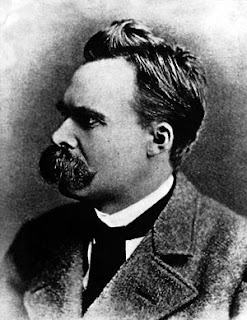 The mighty Nietzsche made a virtue and a career out of issuing (in an ongoing accelerating process) clever statements that contradicted all his other clever statements. Was Nietzsche juvenile? Did Nietzsche remain only 14 for the entirety of his superb existence? Fourteen centuries perhaps; for it would take a normal man that long to match his wit and wisdom!

We value maxims and other aphorisms for their beauty, not for their "truth". What we look for in a maxim or any other memorable saying is a particular sort of music: rhythm, harmony, balance and symmetry (imperfect rather than perfect, as Borges so wisely pointed out). Truth has nothing to do with it. What is truth anyway?

A belief in Absolute Truth is the only truly childish thing there is.
And you can quote me on that...