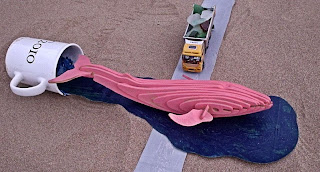 This photo shows the paranoia whale, Moby K. Dick, after he was released from his mug prison. He is sprawling across the main road between Porthcawl and Ogmore-by-Sea, blocking the path of a truck carrying a cargo of sea glass. Only joking -- there's no such road! Moby K. Dick is pink, but that's not his natural skin tone. On the contrary, nobody knows his true colour. The fact of the matter is that he emits pink light through his blowhole and some of the rays collapse back down on top of him.

Moby K. Dick first featured in a story called 'Return to Zenda' which was about Elvis impersonators in Ruritania. That story was published in my Sereia de Curitiba book in Portuguese, but still hasn't appeared in English. Moby has also played a role in 'Rommel Cobra's Swimming Carnival', 'The Private Pirate's Club', 'Whaling Well' and 'Eight Blathering Buccaneers'. In the near future he will probably appear in many more tails -- I mean tales. Michael Bishop also incorporated Moby K. Dick into the playful Story/Introduction he wrote for my Crystal Cosmos book, leading one reviewer (Evelyn C. Leeper) to attribute the invention of the paranoia whale to Mr. Bishop. Inaccurate reviewing is the bane of my writing life! 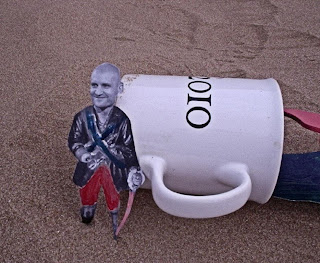 And yet, at this particular moment in time, the main unanswered question remains: who released Moby K. Dick by upsetting his mug prison (observant fellows will note it's an Odyssey 2010 mug)? Which scoundrel would dare such a thing? We don't really have far to look to discover the villain of this cetacean japery! Yes, it's the pirate China Melville himself! China Melville's ear was bitten off by Moby, so he replaced it with a giant barbiturate. China has never forgiven Moby for the disfiguration and has vowed to eternally hunt his tormentor, which explains why he has released the paranoia whale just now. You can't hunt what's already captive!

For more monstrous nonsense along roughly similar lines, here's a guest blog I have written for Gestalt Mash. It's about Mike Mignola and Hellboy and how they both inspired me.

Books in Their Natural Setting 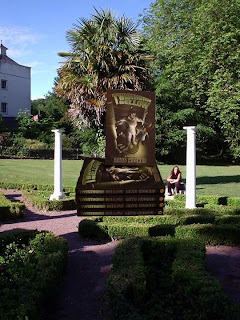 Authors are required by custom to promote themselves in sundry ways. This photo shows outsize copies of my Twisthorn Bellow novel in the park next to Adele. Being so large, these books are difficult to shelve domestically. But some ordinary-sized copies are still available from the publisher or elsewhere. He wrote to me recently to say that only a dozen of the first print-run remain; so best to hurry if you want an inaugural edition!

While on the subject of book promotion, I might as well take this opportunity to plug The Postmodern Mariner yet again. Copies are still available and if you want a discount, simply order one direct from the publisher here while mentioning the keyword "discount". Do this, and not only will you please the publisher and me, you'll also delight the characters in the book, especially Castor Jenkins.

A few days ago I wrote a new Castor Jenkins tale, and it seems inevitable I will write more; probably I'll collect them all in a single volume when I have enough, but not before The Postmodern Mariner sells out. I never planned on returning to Castor: it happened spontaneously. Into my head popped a title for a story, 'The Monkey's Pawpaw', about a haunted papaya that can grant wishes, and it just flowed out from there. 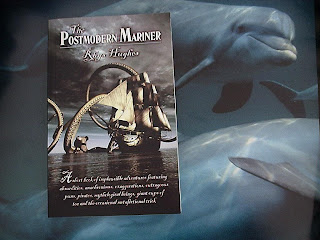 I am also returning to Mr Gum, my obnoxious Creative Writing tutor. As my Mister Gum novel is due to go into a second edition, the publisher suggested I expand the book with a new story. So that's what I'm working on right now. You can still buy the first edition here. I'm also preparing to write the fourth installment in my Albarracín sequence and the second chapter of my new novel, The Young Dictator. It's all go!

Oh yes, and I've just signed a contract with an Italian publisher. I'm going to be translated into Italian! So I'll have my pizza with a topping of ragazza, if you please. Grazie tanto! 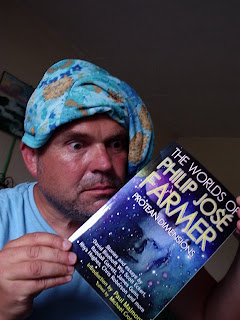 The long awaited tribute volume to the great Philip José Farmer is now available. The Worlds of Philip José Farmer: Protean Dimensions can be ordered from the Official Philip José Farmer Website here. This is a limited edition volume that contains unpublished work by Farmer, as well as a host of stories and articles by other writers. Only 500 copies exist; and approx 400 of those were pre-orders. Which means that there's only about 100 left in TODO MUNDO... So place your orders fast! As I've said before, this book contains one of my own stories, a tribute to Farmer entitled 'The Pollinators', which explains why I am wearing a flowery hat in an effort to promote the volume. Actually it's not really a hat but a pair of Adele's shorts. Yes, you heard right. Shorts. Well, I'd look silly wearing full-length trousers on my head, wouldn't I?

The 10 Best Novels Ever Written 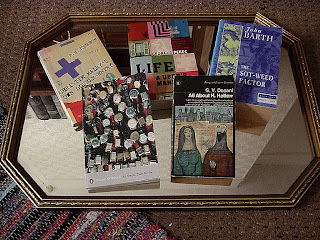 On my one of my other blogs (The Rime of the Postmodern Mariner) I recently posted a short entry listing the “10 Best Short-Story Collections Ever”. I shouldn’t need to stress that the books on that list are my own personal favourites; and that I make no pretence to any sort of illusory or impractical ‘objectivity’. To my astonishment, that particular blog post turned out to be my most viewed entry ever, simply for the reason that the website HTMLGIANT posted a link to it.

I had never heard of that website before, but it clearly has a lot of devoted readers. After the link was posted, my statcounter went through the roof. I regret that I didn’t post the list on my main blog, which is this one. In a somewhat belated tactical attempt to increase the hits on this blog, I have therefore decided to create another list along similar lines, namely the “10 Best Novels Ever Written”. And so here it is, with a group photo of five of them.

My other motive for creating this new list was to see if it avoided one of the criticisms levelled at my short-story list. That criticism was that my list demonstrated “...a pretty narrow palate... No ladies, no one from Africa, Asia, or the Indian subcontinent, and all lodged in the 20th Century.” It’s a perfectly valid point to make, and I have no real answer to it, other than to say that as a white male European it seems that the products of my own basic culture appeal more strongly to me than all the many alternatives.

That’s nothing to be proud of, but it is the way things are for me, and there’s no point pretending that I am more in tune with (for instance) Chinua Achebe, Lu Xun or Arundhati Roy than I am with Italo Calvino, Donald Barthelme or Stanislaw Lem. And yet there was one Asian writer who nearly made it onto my short-story list: Ryūnosuke Akutagawa.

I wanted to see if my novels list would turn out to be more culturally balanced than my short-story one; but in fact it’s only a little more balanced in the sense that it includes one writer from India. There are still no ladies, Africans or Asians. My favourite African novelist is probably Mia Couto; and my favourite Asian novelist is probably Kōbō Abe, though Wu Cheng'en is not far behind. As for ladies: Ursula K. Le Guin never fails to amaze and enthrall me. And yet none of them made my top 10 list.

So here is my new list. Once again, the novels on it are in order, with best first.

It could be argued that some of the above novels are actually omnibus volumes containing several novels or novellas. Yes, that's true; but it's equally true that my character is an omnibus package of various emotions and beliefs. So what? Once again I regret leaving certain authors off this list, especially Nabokov, Zamyatin, Aldiss, Moorcock, Queneau, Marquez, Maalouf, Cabrera Infante, Eco, Kafka, Samuel Beckett, Brion Gysin, William Burroughs, etc.

On yet another of my blogs, The Man Toucan, I discuss Tuckerization. Just because I feel like it...

Monsters of the Victorian Age #4 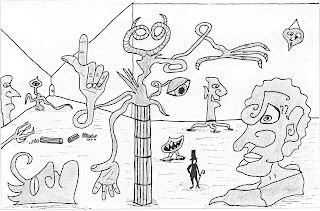 The common assumption that monsters are frightening, and that they frighten human beings, and that the reverse situation never occurs, was conclusively disproved by the opening of the Imperial Monster Museum in 1866, a public facility where unique cryptozoological exhibits could be viewed for a nominal sum. The rooms were filled with monsters that had literally petrified from fright after catching sight of a human face. These stone behemoths, sciapods, harpies, colossi, minotaurs, gorgons, cynocephali, onocentaurs and other mythical beasties were arranged randomly after the directors of the museum disagreed on how best to categorise them. The Imperial Monster Museum was closed in 1899 and the exhibits sold at private auction to statue enthusiasts. 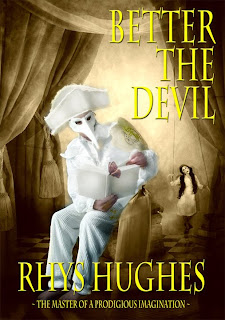 Shall we have a sing-along? Ready? All together now! Seventy-six tale-bones played the big afraid, with one hundred and ten corny lines close behind... Yes, that little ditty is relevant to the following eBook. Available for the Kindle or other newfangled reading machine, Better the Devil, is my first purely digital collection and contains exactly 76 stories from the entire span of my writing career, including my two earliest surviving stories, plus my first published story, etc. All are very short -- that was the criteria for inclusion. Only a few stories are longer than 3000 words and many are below 1000 words.

In point of fact, Better the Devil, is an omnibus of my seven fiction chapbooks. So the contents are as follows:

The final chapbook in that list was put together especially for this eBook and doesn't actually exist in a paper format, though you are perfectly entitled to print one off yourself, if that's what you want. It's a selection of 'flash' fiction. If you are of an arithmetical bent you have probably noticed that the above figures add up to 75. No mistake. I concealed the 76th story in the Introduction... Every author should conceal a story there, in my opinion.

Better the Devil is available from Amazon at the princely sum of $3.51 or free sample viewing here...
Or if you prefer to save a few coins, it's also available at Smashwords here...