The Crawley WordFest begins on Saturday 2nd April; and I have been invited to attend. So I'm going. According to the blurb on the festival website... "WORDfest is Crawley’s first ever festival dedicated to celebrating words and writing in its many forms. Spearheaded by Waterstone’s County Mall Booksellers and Crawley Library. It is a pilot grassroots week-long programme of events..." The list of writers, publishers, etc, who are attending is too long to give here, but it can be found on the festival website on the "Writers & Artists" page. 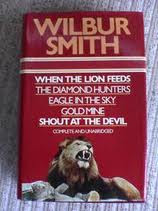 The most famous name there (to me at least) is Wilbur Smith. I remember seeing copies of his novels everywhere when I was a youngster, generally on the shelves of obscure B&Bs in places like Bournemouth. He was one of those authors of well-crafted adventure stories who seemed to thrive in the 1970s. In my mind he is associated with Alistair MacLean and others of that ilk, but in fact Smith is superior. His novels set in Africa form a uniform sequence; and his concern for the welfare of the people, animals and environment of that continent is wholly authentic. You could do a lot worse than to seek out his works. I especially recommend the omnibus volume depicted here...

Anyway... I don't have much time left to prepare for this event; to my surprise I'm doing an event this coming Sunday; and on the following Tuesday I am required to sit in the window of Waterstone's bookstore (I think that's the right shop) and write a story in public on a laptop... I will be given a keyword and the story must flow from that. I'm looking forward to this! The great Harlan Ellison was fond of writing in shop windows; so there's a noble precedent for this kind of activity... By the way, Crawley isn't especially creepy, but I couldn't resist the pun: hence the title of this blog post! 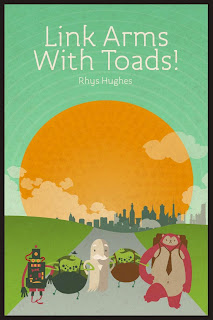 Here's the cover of my forthcoming book, Link Arms With Toads! I'm delighted with it! With luck the book will be published in May. Chômu Press are currently taking a very distinctive (and to my mind extremely effective) approach to cover design. They have just released their latest title, a collection of stories entitled The Life of Polycrates by Brendan Connell, one of the best contemporary writers of dark literary weirdness. Although a new press, Chômu already have a superb lineup of writers. Another personal favourite of mine with a book due out soon is Michael Cisco.

As for my own book: have I already mentioned that it's a 'sampler' of my entire body of work; in other words, it features stories in the genres of fantasy, magic realism, science fiction, postmodern whimsy, gothic pastiche, etc, etc. It'll be the first book of mine to showcase the totality of what I do... The above cover design of Toads! is based on an idea I had a few months ago, but the Chômu artist has vastly improved on my original (which you can see here) by turning an incompetent doodle into a visual statement that captures the flavour of my writing. 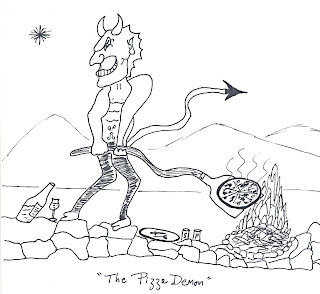 Say hello to the Pizza Demon! He may end up as a character in a future story; I don't know yet. He doesn't know either. The Pizza Demon is a purist when it comes to pizza. Some might even say he's a fanatic! Let's listen to what he has to say on this vital issue... "Don't you dare ask for a deep crust; or for sweetcorn and pineapple topping! There are only three authentic varieties of pizza: Marinara, Margherita and Margherita Extra (with more mozzarella). Nothing else is real pizza. I'm watching what you do in your own kitchens. So behave!"

Some authorities believe that the Pizza Demon is just a myth. They attribute all paranormal pizza activity to the pizzageist instead, a sort of invisible entity that throws the pizza dough around in mid air until it becomes sufficiently thin.

If the Pizza Demon does appear as a character in a story, it's unlikely it will be in the novel I am currently writing. Captains Outrageous is the story of the Faraway Brothers, triplets who travel separately around the world in the early decades of the 20th Century. This novel consists of three interlinked parts, each one devoted to a different brother. I have finished the parts dealing with Scipio Faraway and Distanto Faraway. The final part -- 'The Apedog Incident' -- is mostly set in Africa and features Neary Faraway, the strangest and unluckiest of the siblings...

I was inspired to write Captains Outrageous after finishing work on The Coandă Effect a few months ago. Writing that novella filled me with a strong desire to keep working in the 'enigmatic adventure' tradition... I note, incidentally, that a few copies of The Coandă Effect are still available for sale on the Ex Occidente website... This reminds me: Ex Occidente will probably issue my suite of Albarracín stories in May, but the title of that book will no longer be Tucked Away in Aragon. It's more likely to be Sangria in the Sangraal or maybe something else. I'll post further details as soon as I have them...

Last week I was asked to write a guest blog for the author Sam Stone. I accepted the invitation and produced a piece on The Ultimate Existentialist Horror. You probably won't agree with my candidate for that supreme title, but that's not just my fault: it's your fault as well! 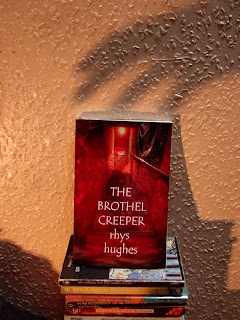 It's shoe-time, I mean showtime!

Yes, The Brothel Creeper is out already! I received my copies two days ago. I think it's my best collection to date. But what would I know? Authors are generally not the smartest judges of their own work. Nonetheless, that's what I truly believe.

20 Tales of Sexual & Spiritual Tension (21 tales if you buy the hardback)... Includes some of my finest stories (in my opinion), such as 'The Quims of Itapetinga', 'The Sickness of Satan', 'The Indigo Casbah', 'The Docking of Spaceship Earth', etc.

It also includes 'Southbound Satin', the story I submitted to Exotic Gothic a couple of years ago: editor Danel Olsen claimed it was "one of the best stories he'd ever read"; the publisher, Christopher Roden, said it was "poorly written and silly"... Clearly there's a huge difference of opinion on the merits of my work. Why not make up your own mind by buying the book and reading it, etc...

It's available from Gray Friar Press even as we speak... 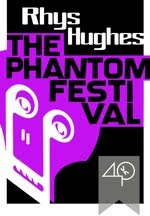 I was recently interviewed by the Italian ebook publisher 40K. It wasn't a proper interview as such: I was given five 'keywords' to respond to. My answers can be found here... The moment the interview appeared online, someone pointed out that I had misspelled the word 'indispensable', and so I had. I sometimes get my vowels in a twost -- I mean twist -- I don't know why. Is it because I'm Welsh? No, it's because I sometimes can't be bothered to consult a dictionary. Mind you, I'm not the only one guilty of misspellings. Editors have sometimes got the titles of my stories wrong. Believe it or not, even my name has been given wrongly by publishers, who have variously announced me as Ryhs Hughes, Rhys Hugues and even Rhys Davies! 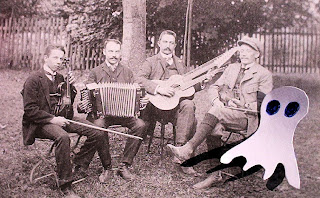 Anyway, all this a premable to the declaration that 40K have just released my new ebook. The Phantom Festival is a story about a music festival for ghosts, a sort of spooky WOMAD, where all the great dead musicians of former times are free to play on a variety of different levels deep under the ground. The deeper the level, the further back in time the performance. So if you want to listen to the troubadours of the 12th century (Guilhèm de Peitieus, for example) you have to go rather deep; in the story, the narrator decides to go right to the bottom to attend the very first musical performance ever. That's the main conceit of the tale. Obviously things don't go quite to plan; the operative word here being things.

The Phantom Festival is available in Italian as well as in English (Il Festival dei Fantasmi) at the grand price of $0.99 (or £0.71). Yes, that's right. Seventy one pence. More details can be found by clicking here.