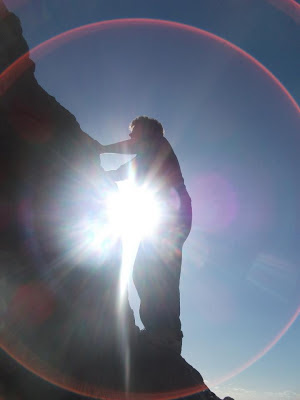 I had a real day of adventure yesterday. The most technical climbing I have managed so far, finally overcoming my reliance on jug holds and learning how to trust crimps, slopers and pinch grips, and getting the feet to balance successfully on much smaller footholds than usual. I'm improving slowly. Managed to get stuck at the top of an outcrop for five minutes, had to fight the fear, keep a cool head and get myself out of trouble calmly and precisely. Good practice!

There was also an interesting scramble through a narrow gully with smoothish sides and a race against the incoming tide to climb over the final obstacle and get clear. It was a sunny day but cold -- like a professional smile. Despite my dislike of the cold, such conditions are better than endless rain and smothering greyness.

"Adventure" in real life, for me, is a rather less bizarre and catastrophic concept than it is for the characters in most of my stories. The ultimate fictional adventure I have written so far is that of the apeman test pilot, Stringent Strange. This book still needs pre-orders! In fact it needs another ten to be a viable product. So if you are feeling heroic, why not help him out by pre-ordering a copy? You'll get a mention in the book itself.


Alternatively, you can pre-order the book and also a 'deleted scene' which will be a loose page that features you in your own combat scene that you can slip into the book on a predetermined page. Why not be part of the story? If you want this option, then here's a button especially for that purpose...


A big hearty THANKS if you do pre-order a book! 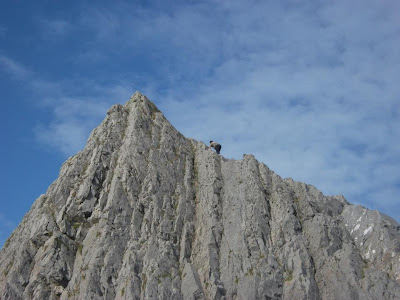 So much to do! Brain overload alert! If you have submitted something to the Winter issue of Sein Und Werden and are wondering why I haven't responded yet, rest assured I'll reply before the end of this week... I have been rather busy lately...

I've just finished turning my rare first edition copy of Maurice Richardson's Exploits of Engelbrecht into an eBook that should be available soon, thanks to the permission of Richardson's daughter and the enthusiasm of Pete Crowther. More about this when I know more...

I am also putting together two new books, a big volume of tribute stories to authors I admire called The Senile Pagodas; and a new collection entitled Troubleroot and Other Tangled Tales... Plus I am writing short-stories for another possible future collection and I have recently resumed work on a novella called '500 Eyes' that I started decades ago; it's a Candide-style satire but as weird as I can possibly go; I intend to crack it at long last!

I am also planning a series of interviews with a small number of important writers, including Alexei Panshin and A.A. Attanasio (I also intend to ask Ian Watson, Brian Aldiss and Michael Moorcock and several others.)

And I'm also writing so-called 'deleted scenes' for The Abnormalities of Stringent Strange. This book still needs pre-orders! If you want to pre-order it, with or without your own 'deleted scene', please click on this link to the publisher's website.

Don't forget to sign the petition to stop the cruel badger cull, if you haven't already done so!

In my spare time I go climbing. Two days ago I climbed in Three Cliffs Bay again, as can be seen from this photo...

The Screaming Book of Horror 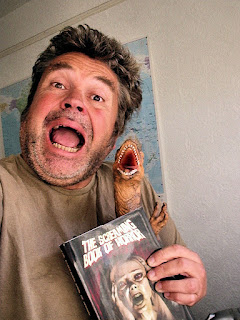 I rarely write 'horror' stories. I rarely write stories that fit into any genre; nonetheless I am delighted that one of my tales appears in a new horror anthology from Screaming Dreams. I received my complimentary copy yesterday and I am extremely impressed by the production values on display. This is the quality that publishers should always aim for, whether they are big commercial companies, quirky independents or small hobby outfits.

Good production values are essential to give the contents the correct setting. The best fiction in the world struggles to engage a reader when it is presented badly, with typographical errors and poorly designed outlay. So a big hand for both Steve Upham (publisher) and Johnny Mains (editor), the pair who made this limited-edition hardback anthology possible and ensured that it's a beautiful product!

My own contribution to the book is a story I wrote in a hotel room in Portugal back in 2006. A mere six year wait for one of my pieces to see print is quite good actually: I often have to wait much longer... 'The Quixote Candidate' recounts the adventures of a film fantatic who has attended so many screenings of various cinematic versions of the Quixote story that he becomes befuddled and starts to imagine that he is a film director and that real life is the film he is making... with diabolical consequences.

Stringent Strange. He's not a shadow but an apeman. An apeman test pilot. Therefore he has a hairy shadow, almost as hairy as the scrapes he gets into! The book of his adventures, The Abnormalities of Stringent Strange, is now available for pre-order. Here's a 'buy now' button you can utilise to pre-order it! If you do pre-order it you'll appear as an audience member during the gladiatorial battle scenes arranged by the telepathic winking dinosaurs of the planet Zyra!

Alternatively, you can pre-order the book and also a 'deleted scene' which will be a loose page that features you in your own combat scene that you can slip into the book on a predetermined page. Why not be part of the story? If you want this option, then here's a button especially for that purpose...

THANKS! From me and my shadow...
And also a MASSIVE THANKS from Stringent himself! 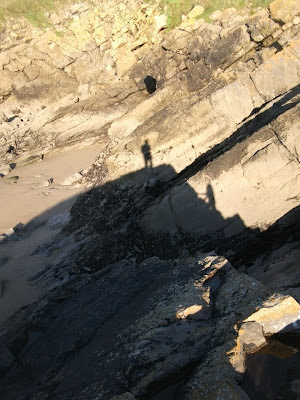 Spare a thought for your poor shadow the next time you do anything strenuous on a sunny day, because our shadows are compelled to mimic us whatever we do without even a noticeable time lag and although it's possible that perhaps I've got this the wrong way round (and that it is actually us who are condemned to follow the movements of our shadows) it is better to show some sympathy than none wherever there is any doubt.

So a big hand for our shadows, those unsung umbrae!

Here you may view my shadow standing on top of a peak while another shadow climbs up to meet me. This doesn't mean that my shadow is a better climber than the other shadow. Quite the opposite, as it happens...

I have been asked to guest-edit the next (Winter) issue of Sein und Werden, a good old-fashioned small press publication that will be photocopied and stapled and will surely end up looking like something from the early 1990s.

The theme I have chosen (because I have been allowed to choose) is THE IRONIC FANTASTIC and here are the general guidelines:

I'm after fantastical/absurdist 'comedies' 1000 words or less. By 'comedies' I don't mean that they have to be funny: wistful, thoughtful and droll are fine, so are weird and quirky. I'm thinking of a broader definition of the term, in the same way that Nabokov's brilliant Laughter in the Dark is a 'comedy' but it didn't make me laugh..

Originally I was intending only to accept submissions from the European continent, but that's a bit restrictive really: what I actually want are European flavoured stories of a literary nature.Colloquial prose doesn't impress me much, I'm afraid, nor does weepy boo-hoo, overworked characterisation or moody description. No, I want ideas! Funny ideas, absurd ideas, intelligently daft ideas! Poetry and images are more than welcome too. So are brief dramatic 'scenes'.

There's only 15K of space, so that doesn't give me a lot to work with. But if you think you have something suitable please email it as a Word attachment to the following address: seinundwerdenguest@gmail.com

Closing date for submissions is December 20th, 2012 (which is just before the end of the world, I believe.)