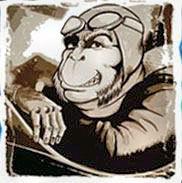 Only SIX DAYS left to order The Abnormalities of Stringent Strange. After that, it will be impossible to order the signed limited-edition novel from Meteor House. So get your orders in now!

What They Have Said So Far...

"Dive into this deliciously daft dose of dastardly doings and dire dangers of doom, detailing the daring deeds of a demi-gorilla Dan Dare of 1930s (d)aeronautics, danged delightful and diverting. For the deaf: describes some detonations. Rhys Hughes outDoes himself. As surreal as Roberto Quaglia´s Paradoxine!! says Dan Datsun, I mean Ian Watson..." -- Ian Watson

"The Abnormalities of Stringent Strange adroitly moves in and out of the shadows of the absurd while shedding light on human nature, the perverse constraints of reason -- and literature! There's a lot to appreciate in this work, which is like a hot air balloon (or, truer yet, zeppelin) that lifts the reader above the tumultuous wilderness of the human condition the better to survey where we are. Though tongue firmly in cheek, this work affirms old Freud's dictum, 'There's nothing more serious than a joke.'" -- A.A. Attanasio

"Harry Stephen Keeler. Lester Dent. Ray Cummings. Neil R. Jones. Jeff Lint. In his latest neuron-warping metanovel, Rhys Hughes has surpassed all these illustrious predecessors in that noble lineage of wall-eyed, demented, scoop-brained scientifiction. Or rather, he has become all these men. And perhaps several women, cats, robots and apes ...as well. I can't say for sure, since I am still respooling my altered DNA after being swept up in the time-leaping, space-annihilating adventures of hybrid hero "Stringy" Strange and cyborg'd Professor Crinkle. Together, they succeed in making Alan Moore's Tom Strong look like Doc Savage in a tutu attempting to mime the theft of Philip K. Dick's android head. And you just can't beat that!" -- Paul Di Filippo

Thatcher is dead! The tyrant is dead!
Time to party, time to dance!
I have been awaiting this event for a long time. I am delighted...

Nine years ago I wrote an article that accurately predicted the death of Thatcher. In order to celebrate the real event, here's the piece I wrote... Bouffant Terrible.

I wrote this especially for the first Forum Fantastico in Lisbon in 2004 and read it aloud to a room of people including Safaa Dib, Luís Rodrigues, Pedro Piedade Marques and various other fine and excellent individuals.

Yes, it may be a little childish to celebrate the death of Thatcher. But the genuinely mature person knows that it's healthy and necessary to be childish at certain times. To insist on permanent maturity is a very juvenile attitude.

Besides, different responses suit different personalities. I am a hotheaded red blooded male, so to have a contemplatative and gentle response to this event would be unnatural and wrong and probably unhealthy for me; whereas if I was a more subudued individual then sitting in a chair with a big chin and being philosophical might be the right response for me. We are all different and when it comes to an emotional response one size does not fit all. I plan to paste her face onto a melon later today and use an old Italian épée to give it some juicy punishment. This isn't something I recommend to everyone, but I certainly recommend it to myself. Others might just prefer to have a cup of tea.

Another thing... You don't have to be left-wing or even a liberal to hate Thatcher. One thing that is rarely talked about is how she destroyed the old original values of the Tory Party. Before Thatcher the Conservatives also believed in social justice (Disraeli was responsible for more progressive reforms than Gladstone ever was) but they wanted change to be slower -- and thus less disruptive -- than the Socialists did. Evolution rather than Revolution... Thatcher spat on the One-Nation ideals of Disraeli and changed the party for the worse and ultimately gave us the bunch of bastards we have now...

You have a 'mature' response to her death if you want to. This fellow's not for maturing... 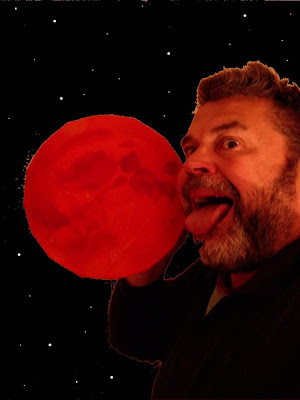 My second recorded story is now available on YouTube. It is called 'The Six Sentinels' and also comes from my latest book, Tallest Stories. It was partly inspired by some of the more playfully ironic stories of Lord Dunsany (who got more ironic as he got older).

And if you don't care to give it a listen, then don't click on the link!

More recorded readings will be available soon, at least one more also from the same book (why not buy it and get all 60 tales ready to be read in your own voice?)