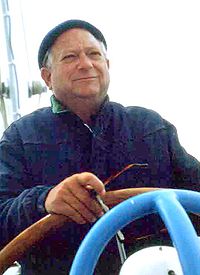 One of the best writers of the past hundred years died last Sunday night, while I happened to be sleeping under the stars on Oxwich Beach. I felt oddly troubled the following day. I don't believe in telepathy, ghosts, supernatural events; on the other hand I don't not believe in them. It was as if I felt an important part falling off the engine of the world. It was Vance, of course, but I didn't find that out until yesterday.

If I hadn't discovered the works of Vance I probably wouldn't be a writer today. He kept me going by showing me that it was possible for fantasy and other genre works to be clever, witty, wise and sophisticated literature. He was a master of imagination, invention, colour, mythology and wry ironic humour, heir to the 'muscular baroque' comedies of Richard Garnett, Ernest Bramah and James Branch Cabell (though he more often cited P.G. Wodehouse as his biggest influence).

The first Vance story I ever read was 'The Last Castle', a novelette that impressed me with its epic qualities at an age when I was very Homeric in my tastes. But it was The Eyes of the Overworld that really turned me into a Vance devotee. I discovered this book when I was 19 years old and it has remained my favourite fantasy novel ever since: it's a collection of linked picaresque adventures featuring a rogue by the name of Cugel the Clever. Saturated with irony, the anti-jingo tone, quirky humour and 'Reynardine' aspects of the story perfectly appealed to me. The book also has one of the best circular plots I have encountered. 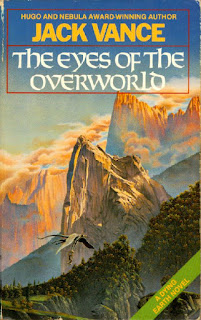 The Eyes of the Overworld is only one of four books in a grand sequence called Tales of the Dying Earth. I can think of no finer single volume in the entire history of fantasy writing. This is definitely one of my 'desert island' books; in fact it might well be THE desert island book for me (its only rival: Calvino's Our Ancestors). I found the cumulative effect of the separate parts of this masterwork to be utterly overwhelming: the beauty, wistfulness, cunning, bitterness, sweetness, everything richly but also sombrely coloured. There is something that connects deep with the human psyche (or at least with my psyche) in Vance's vision of a farflung future Earth that is home to the last gasp of humanity, where technology and real magic coexist and the exhortation carpe diem has never been more important and never made more futile by weariness and resignation.

Although Tales of the Dying Earth is my ultimate choice as a Vance classic, he wrote many other astounding works that I have enjoyed almost as much. Big Planet has lodged itself firmly in my memory; the Durdane sequence is equally wonderful; the Demon Princes series is superb too; to say nothing of The Blue World, Emphyrio, Maske: Thaery and the magnificent Showboat World... Next on my reading list are The Dragon Masters and the Alastor trilogy. I have never yet read a bad Vance work.

Sein und Werden: Where is it?


Massive apologies to everyone for the enormous delay with the so-called 'Winter' edition of Sein und Werden free ebook, namely The Ironic Fantastic...

The fault is entirely mine and mine only. If you submitted a piece for this ebook and I accepted it, and if you are reading this right now, your options are as follows: (1) feel free to send your piece anywhere else or publish it on your own website/blog etc, (2) email it to me afresh at rhysaurus@yahoo.co.uk, (3) continue to wait until I get in contact with you...

There's no reason why your piece can't appear in the ebook and elsewhere at the same time; and if you manage to sell it somewhere else after it has already appeared in the ebook, I can always re-upload the ebook without your piece. Sorry again for this appalling delay. It will happen!!

Alchemy: from Ebooks to Chapbooks... 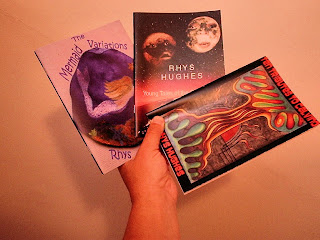 My self-published ebooks have done OK in the 18 months or so since I started putting them up. Not brilliantly but not badly. I have twelve available at the moment but I am going to start taking some of them down.

Later this year I will be issuing an ebook that contains more than one million words of fiction (the longest single-author ebook collection ever?) called The Million World Storybook and it will contain most of the material in many of the existing ebooks.

I have also just submitted my fables and flash fictions to a publisher in the hope that they might appear as real books, so I'll also be withdrawing those ebooks. 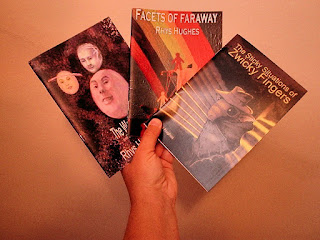 However, for a limited time only, courtesy of Portuguese genius, Paulo Brito, six of the existing ebooks can be purchased as proper chapbooks. Paulo makes them by hand and he is going to mail a stack of them to me.

I can offer the following six titles as chapbooks:


This blog post is for people who don't know what I do. Often (by 'often' I mean sometimes) I am asked what books are most representative of my work. In other words, what do you do? The answer to this question is now fairly simple. It wasn't so simple before. The neatest solution to the question of what I do is provided by two books, my two most recent. This is what I do. 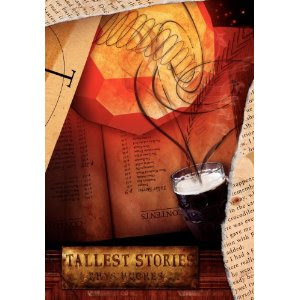 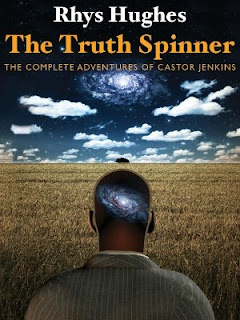 If all my other books vanished in a puff of green and orange smoke, the essential part of my creativity would still survive thanks to these two volumes. Both are available from Amazon. The Truth Spinner is £11.69 and Tallest Stories is £9.50.


My new book The Abnormalities of Stringent Strange is off to the printers very soon. Thanks to everyone for their patience! I conceived this novel at the end of 2009; wrote it in January 2010; sent it to my agent who sat on it for ages and did nothing with it; decided to seek out a publisher on my own and chanced upon the excellent Meteor House, who accepted it. Normally I find self-promotion a bit of a chore but promoting this book has been fun and a chance for some daft photographic experiments...

I could talk about the projects I am currently working on (there are several) or the sales I have made recently (there have been many) but I'll just leave you with an online story called 'Invisible Letters' that has appeared in a new online chapbook (you can order a print version if you prefer). Click on this link. Hope you enjoy!