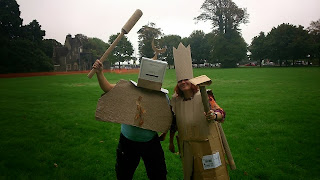 My friend Fiona has come down from London to stay with me for 10 days. I rarely have visitors because my flat is so small and my lifestyle is rather too spartan for most people. I shall have to wear her out with outdoors activities so that she doesn't notice the lack of luxuries! Yesterday we went to Cardboard Wars in Singelton Park. We had to make suits of armour and weapons out of cardboard and then bash each other on the noggin and elsewhere in a properly organised tourney. I think that this event has something to do with the Art Across the City programme of public art works and happenings. Incidentally I lost my fight in the first round. 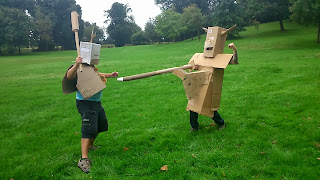 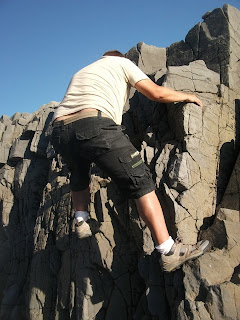 I am a big believer in the benefits of outdoors life. I tend to think that anyone with a sit-down job (a writer, for example) is in danger of physical, mental and spiritual withering if they don't get out regularly into the fresh air. Not that the air of our polluted and overpopulated world is especially fresh anymore. Still, you have to make the most of what's available.

So yesterday was another climbing day for me. I discovered a tiny cove inaccessible save by some tricky scrambling and standing there I felt like an explorer in a minor key. How many people have ever visited this little place, I wondered? It can't be many, but surely someone else has in the entire history of the human race. 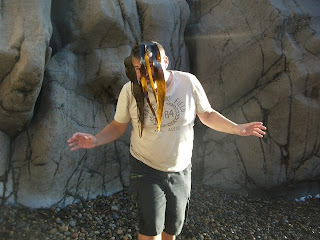 When I was young I was asked by various adults what I wanted to be when I grew up. "An explorer," I answered. I was told that it was an impossible career choice because there was nowhere left to discover. But that's not quite true. There must be some places where no human foot has ever trodden. And maybe these places are closer to home than we imagine...

The previous week I went to Pembrokeshire to walk a section of the coastal path. I started near Milford Haven and ended up in Broad Haven, a distance of 26 miles, and after ten hours of trudging up and down, up and down, I was rewarded with one of the best sunsets I have ever seen. Hardly virgin territory but magnificent! One day I really must embark on walking the entire coastal path. People often say this but never actually do it; and I am no different. 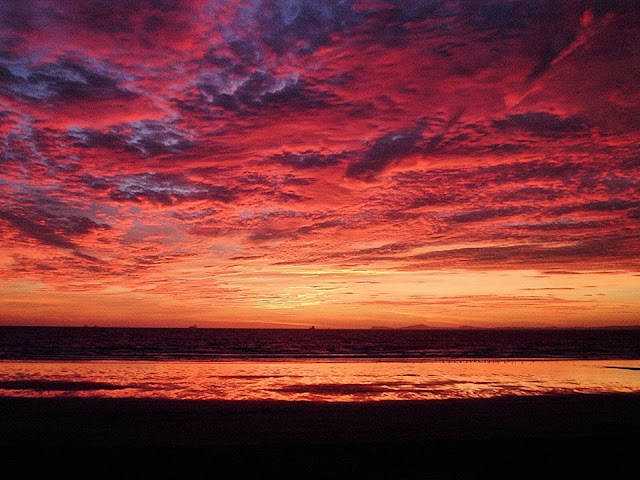 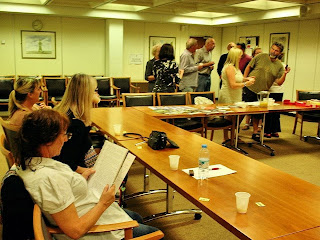 My talk on OuLiPo last Wednesday went extremely well. That's what I think anyway... Obviously it's impossible to have an objective view of such things but I spoke for about an hour and a half without notes. Call me smug but I was quite pleased... My friend Hannah (she's a deep-sea diver) took this photo of the orange-juice-and-fondant-fancies aftermath. For some reason I am doing a weird and camp "cake dance" while chatting to one of the organisers...

OuLiPo is almost unknown in Britain. Why this should be so is something of a mystery. British writers just seem very resistant to experimenting with form. They are often unaware that the option to experiment with form even exists; and when they do take the plunge they tend to make it a rather dry exercise. One of the best things about OuLiPo is the playful aspect of the work produced: the results are nearly always humorous, quirky and (by necessity) original and unexpected. 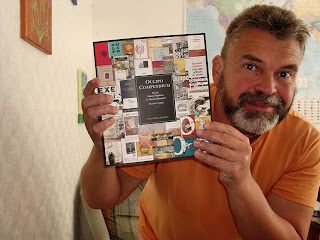 Yesterday I received a parcel from Amazon containing a very remarkable book, namely a comprehensive anthology of OuLiPo writing from the 1960s to the present... Edited by Harry Matthews (one of the only English speaking members of OuLiPo) this anthology is packed full of cerebral delights that for the most part are inspiring and amusing.


One of the reasons I was attracted to the literature of the 'weird' in the first place is because it promised unfettered imagination and genuine originality; subsequently I was disappointed. Most 'weird' fiction is derivative, bland and conceptually timid. OuLiPo successfully achieves what the weird fails to do and for my money it is the most inventive 'movement' to appear in Literature and the work produced by OuLiPo writers is the most original, unexpected and genuinely imaginative that I have ever encountered... 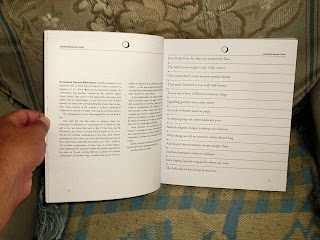 For instance, one of the works included in the Compendium is One Hundred Thousand Billion Poems by Raymond Queneau. The title is no exaggeration. There really are 100,000,000,000,000 poems here, all of them coherent and different, but you have to cut each multi-function line of the ten sonnets into strips to get access to all the permutations... This conceit is an example of the sort of formal brilliance that never seems to occur to genre writers and is why I have a horror of regarding myself as a genre writer. 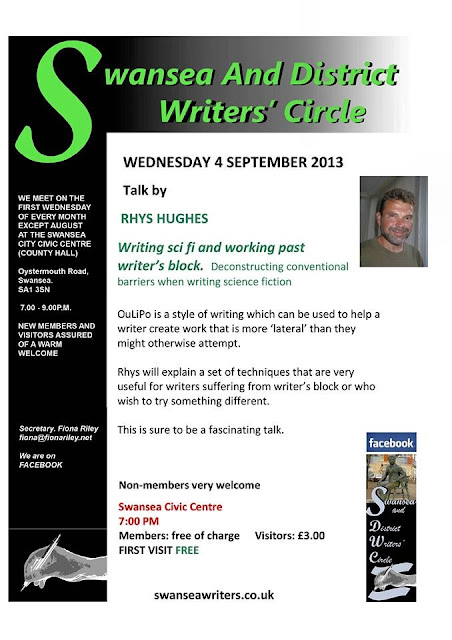 I am giving a talk on OuLiPo this evening.
Committee Room 1, County Hall, Swansea. 7pm to 9pm.
I suppose I ought to prepare a bit for it today...

Come along if you happen to be in the area and have a bit of fun with various constrictive-constructive techniques such as lipograms, exquisite corpse and N+7.
There will be the writing of a communal poem that I'll put up on my blog.
Or don't come along if you prefer!