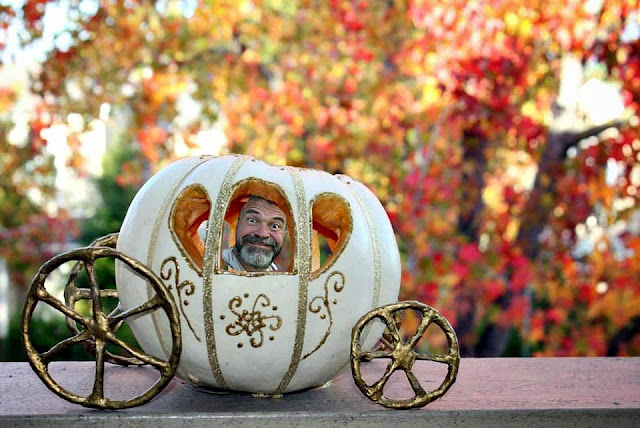 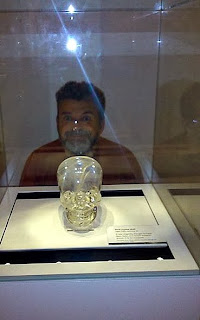 I have been in London for the past week. I haven't been doing as much work as I ought to and that needs to change. But anyway... London. The Big Smoke. I actually lived here for six months back in 1989 and it has changed a lot since then. But you don't want to hear about that...

A couple of days ago I went to the theatre in the West End to watch a play about the singer Paul Robeson. Very good it was too. If I had more money I would go to the theatre more often, but I don't so I shan't. I tend to stick to free activities. The British Museum is a free activity and one of the best museums in the world.

This photo shows me with one of the famous 'crystal skulls' that were supposedly made by the ancient inhabitants of Atlantis or the Aztecs. With this skull you can channel the cosmic powers of the ages, mages and sages. Unfortunately it doesn't really work. This is because it's not really an antediluvian artefact but was made by craftsmen in 19th Century Brazil. Even if it was an antediluvian artefact it wouldn't work, because supernatural powers don't exist. No matter! It's still impressive. The crystal skull is the object in the foreground, by the way... 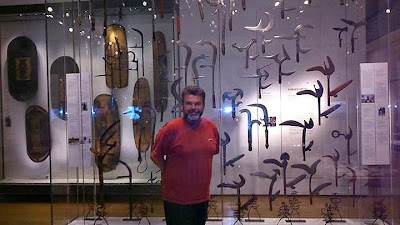 Back in 2009 I wrote a novel called Twisthorn Bellow that features a golem who uses a kpinga. A kpinga is an African throwing sword. Here is a display case of genuine kpingas and fearsome weapons they are too! Imagine facing an oncoming barrage of these! Unfortunately this novel is unavailable as a physical object: the first edition sold out and hasn't yet been reprinted. But the kindle version is still available and maybe one day there will be a proper reprint.

Am I a Mystery?


Here's a short film about my 'career' made by the excellent fellow Paulo Brito.

The most exciting event in this career for ages and ages is the forthcoming publication of my novel The Young Dictator... Watch here for updates!

Just Not So Kindle Version 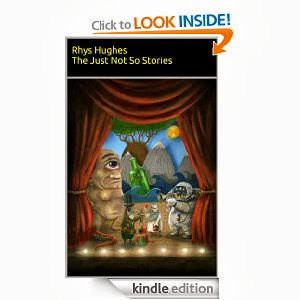 My most recent book The Just Not So Stories is now available for the Kindle. I don't have a Kindle but I do know how to kindle a fire... Anyway, this new collection of mine features 30 tales and some of them are (in my view) among the best stories I have written, such as 'My Crow Nation', 'The Blue Jewel Fruit', 'How to Lose Friends and Alienate People', 'The Leveller of Neptune' and 'Message to Rosita'.

If you follow the link to the relevant Amazon page and then click to "Look Inside" you can read the first two stories -- 'The Mistake' and 'The Pastel Whimsy' -- for free! Incidentally, 'The Mistake' was the story I read aloud in the only SF convention I've ever been to (Eastercon back in 2010). But anyway, the entire book can be downloaded from Amazon here for $5.66. I think that's very good value!

Facets of Faraway is Back 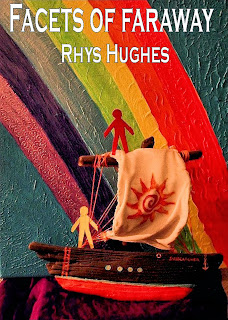 My set of self-published ebooks is being adjusted and reordered. Recently I took down some of them. A few will be reinstated in improved form! For instance, I have added new stories to Facets of Faraway and lowered the price. It is now only $0.99 on Smashwords. That's about 62p. I am lowering the prices of nearly all of them. I won't be adding many more new ebooks to the set, just a collection of cat stories and then the biggie, the monumental Million Word Storybook. And that will be it! Finito!

I also want the contents of a few of these ebooks to be slightly different in their Smashwords and Amazon editions. I tend to sell more of them on Amazon, for some reason but the Smashwords editions will often be better value for money, more stories for less cash. Facets of Faraway is almost the same in both editions but not quite. I don't want people to buy both editions: the point is to make a choice. This makes it a little more interesting and variable in my view. 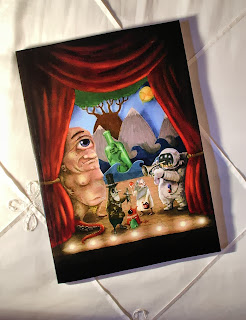 I've had a proof copy for several months but only now is my new book available for general consumption. The Just Not So Stories features no less than 30 of my most absurdist-flavoured tales, including some of my personal favourites such as 'The Leveller of Neptune', 'How to Lose Friends and Alienate People', 'Message to Rosita', 'My Crow Nation', 'The Blue Jewel Fruit' and 'The Sun Trap'.

This collection is dedicated to Nebula Award winner Michael Bishop because the final story in the book was one he graciously consented to contribute to. 'My Own Worse Anemone' is partly set in the Land of Oz and partly in our world; and Michael is a character who gets to speak dialogue he wrote himself. It's always a joy when an author as renowned as he is shows himself willing to involve himself in such playful experiments!

The Just Not So Stories is published by The Exaggerated Press (a relatively new British small-press) and can be purchased here for the sum of £7.99, making it one of my cheapest ever books!

A fine Portuguese fellow by the name of Paulo Brito has decided to create an extremely limited edition deluxe book of my story 'Monsters of the Victorian Age'. That particular story (in thrall to my literary hero Donald Barthelme) consists of drawings and text in equal measure. I can't draw very well but I didn't let that fact hold me back! 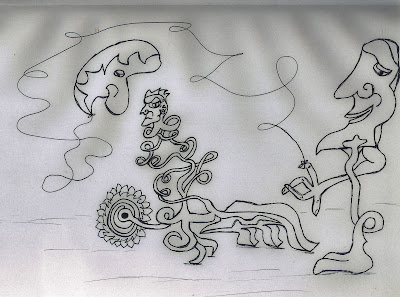 Now here's the thing. Paulo wants more monsters in the book than the original six, so he is asking for contributions. People are already sending in pictures and I did another too (see above). Do you have any inclination to draw a monster for this project? The closing date is October 15th. Email them to me at the following address: rhysaurus@gmail.com

Monsters, monsters, give me monsters!