The publisher of my most recent novel has made a short film which includes a brief reading of the opening of the first chapter. I'm going to fib and say that the extract is read aloud by Dylan Moran because that's who it sounds like and also because I'm not actually sure who 'Thaddeus Lovecraft' really is. He might be Mark Lloyd, who runs Pillar International Publishing, or he might not be. Anyway I am thinking that my novel might make a rather nice audio book and the publisher agrees with me. Watch this space.

The Young Dictator is available from Amazon here and other online bookshops and hopefully soon will be on the shelves of real bookshops too.


How does one promote two books AT THE SAME TIME?

The only answer is to duplicate yourself and promote them both equally... So here we go. I closed my eyes and strained and eventually popped into two individuals this morning! It wasn't easy...

THE JUST NOT SO STORIES on the left; THE YOUNG DICTATOR on the right. (And yes, she is mainly on the right, even if not always in the right) 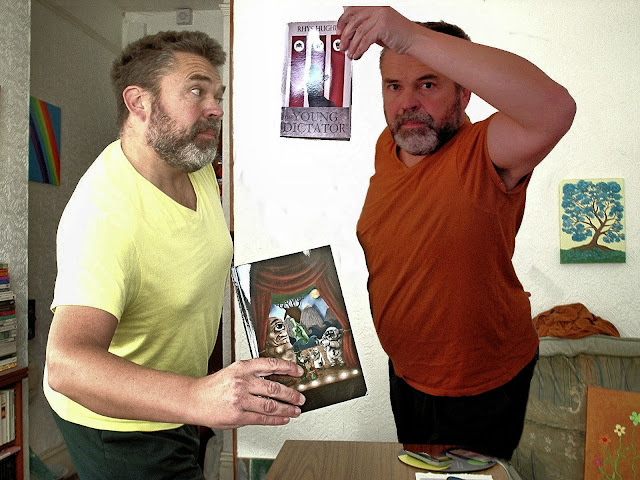 The Just Not So Stories can be purchased by clicking on this link.

The Young Dictator can be purchased by clicking on this link.


I have been so productive in the past five years that things are starting to get a bit confusing... In an attempt to get matters clear in my own mind I have made the following list of my books that are due out in the near (or reasonably near) future:

(1) More Than a Feline (a book of cat stories, poems and drawings)
(2) The Lunar Tickle (the complete adventures of Thornton Excelsior)
(3) The Senile Pagodas (a book of tribute stories to authors I admire)
(4) The Million Word Storybook (365 stories and exactly 1,000,000 words; it will be the longest single author collection ever published and only available as an ebook)
(5) Sangria in the Sangraal (updated second edition)
(6) Bone Idle in the Charnel-House (a collection of gothicky stories)
(7) Modern Milesian Tales (a collection of dark fantasy stories)
(8) The Knight of Whatever (poetry collection)
(9) Tintin in Oz (a novel that I haven't actually written yet but that has been commissioned)


This list may be subject to changes, of course; projects might be added (for instance The Impossible Inferno collection) or subtracted from it. The world might end first, etc. But this is a rough schedule. I do have the feeling I've left something off though!

I am supposed to be promoting my new most recent books, The Just Not So Stories and The Young Dictator, instead of talking about forthcoming books; I'll return to doing that imminently!


Just a photo of a few copies of my new book... 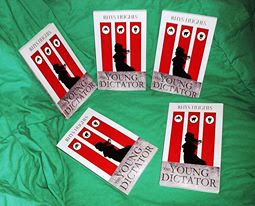 It's always nice when a concept turns itself into words and those words are actually printed and gathered together into a physical object... 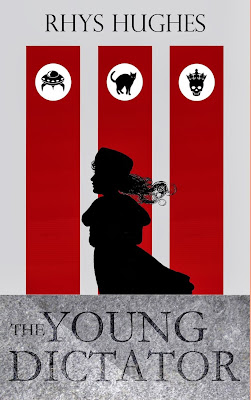 I am delighted to announce that my twenty-sixth book was published yesterday. The Young Dictator is available from Amazon right now and will be available from many other places in the coming weeks... This novel is my most accessible book to date, so if you are new to my work and want to try something but don't know what to go for, I'll say try this one. It has been described as Roald Dahl meets Spike Milligan and Kurt Vonnegut and that's exactly the effect I was aiming for!

Many years ago I tried to write a children's story but I never completed it. Then back in 2010 the editor Mike Ashley asked me to write a YA (young Adults) story for an anthology he was compiling. I dusted off the story I had started long before and finished it for him. As it happened, his anthology was cancelled so I decided to make my story the first chapter of a novel. The result was The Young Dictator. It's not really a YA novel, though I do think it can be easily read by anyone from the age of 12 onward.

That first chapter was published as a stand-alone story in the Spring issue of the BFS (British Fantasy Society) journal last year and was received well by readers. I sent the finished novel to my agent but he didn't like it very much. He felt that the main character, Jenny, a young girl, was too vicious. But that's the point. The novel is a comedy about dictatorship and nice dictators aren't much fun in fiction, are they? My agent also didn't enjoy the fact that the novel often uses lateral logic rather than the logic of everyday events.

Luckily there was a publisher out there who was willing to embrace absurdity and humorous darkness. Pillar International Publishing was founded in Ireland in the 1930s by Victor Lloyd and named after Nelson's Pillar, a structure that stood in the middle of O'Connell Street in Dublin until it was blown up by the IRA in 1966 (it had already survived an earlier attack in 1955 in which nine students had tried to melt it with flamethrowers). The original press issued many murder mysteries of the Death Carries a Coffin and She Died of Death type...

Victor's grandson, Mark Lloyd, refounded the press last year and by happy chance I learned of its existence thanks to the writer Sara Crowe. I submitted the book and it was accepted, and now it is a physical object and an ebook. I am proud of all my books but this one has increased the width of my grin by an unprecedented magnitude. It can be purchased online from Amazon here. All hail The Young Dictator! All hail her Gran too!