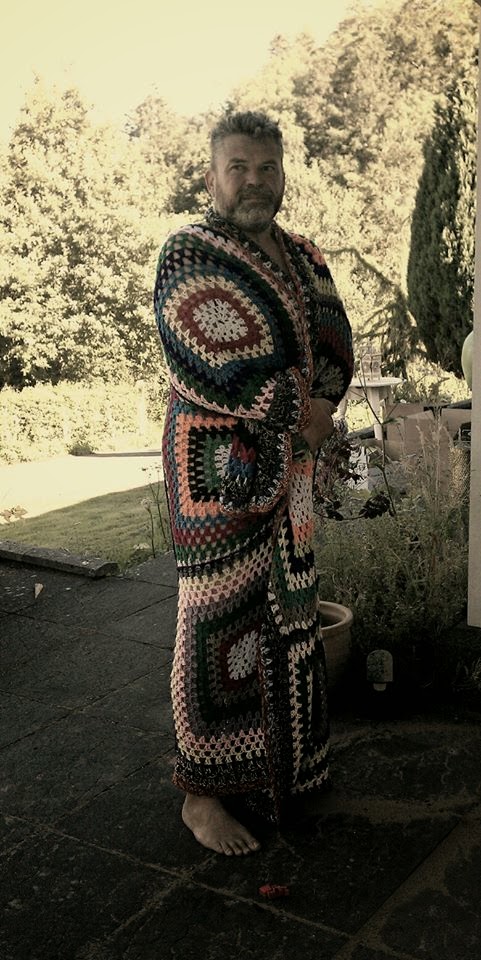 I have had an extremely good personal month, one of the best for ages, and therefore my writing has suffered as a result. My rate of production has dropped to a very low level. Too bad! I will pick it up again soon enough... In the meantime this photo shows me on the terrace of a house near Aberglasney Gardens, which I have been lucky enough to wander around in the sunset recently. This is not a dressing gown but a blanket... I am hoping to be spending quite a large amount of time in this new location.

But anyway... This is supposed to be a blog about my writing life. A new review of my collection The Just Not so Stories has just appeared in Locus. It's a review written by the most excellent Paul Di Filippo.

Ever since I had a story published in The Mammoth Book of Best British Crime anthology last month, I have been considering the idea of writing another crime story... Recently I have been reading the 'Maigret' novels of Georges Simenon and it occurred to me that it might be fun to write a 'Maigret' tale of my own. I am toying with the idea of getting Maigret to intertextually raid the Château de Roissy, which always seemed to me to be a highly illegal establishment... People who know what I am talking about at this point will appreciate the opportunities of colliding two radically different styles of writing and two incompatible sets of moral values... And I have a great potential title for my story... 'Fifty Shades of Maigret'. 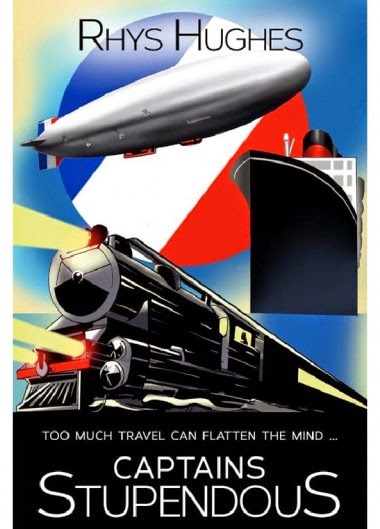 My new novel is available for pre-order as from this moment...

It's an adventure featuring three brothers who are captains of different types of transportation, namely ship, zeppelin and train, and how they avoid and interact with each other; and the consequences of living in interesting times (the early decades of the 20th Century!); and the secret political intrigues that take place behind the scenes; and... magic and yetis and living skeletons and lots and lots and lots of other stuff!

It is available from Telos Publishing and I am delighted to be working with them.

It's not really a Steampunk novel, more of a Steamprog one. There is very little punk anywhere in it, but quite a lot of prog...

"So you want to know about the Faraway Brothers, do you? Born somewhere in Gascony, they were, in the 1880s, all three of them birthed at the same time from the same womb of the same mother. Grew up in the same household, they did too, eating the same food, reading the same books, counting the legs on the same spider because the family couldn’t afford a real clock; but later they went their separate ways. Scipio took to the sea, to ships, islands and women; Distanto took to the air, to balloons, islands and women; Neary, unluckiest of the triplets, remained on land, taking only to locomotives and stations and chastity. Many adventures they all had and often their paths crossed and sometimes they clashed and the consequences were always totally STUPENDOUS!" 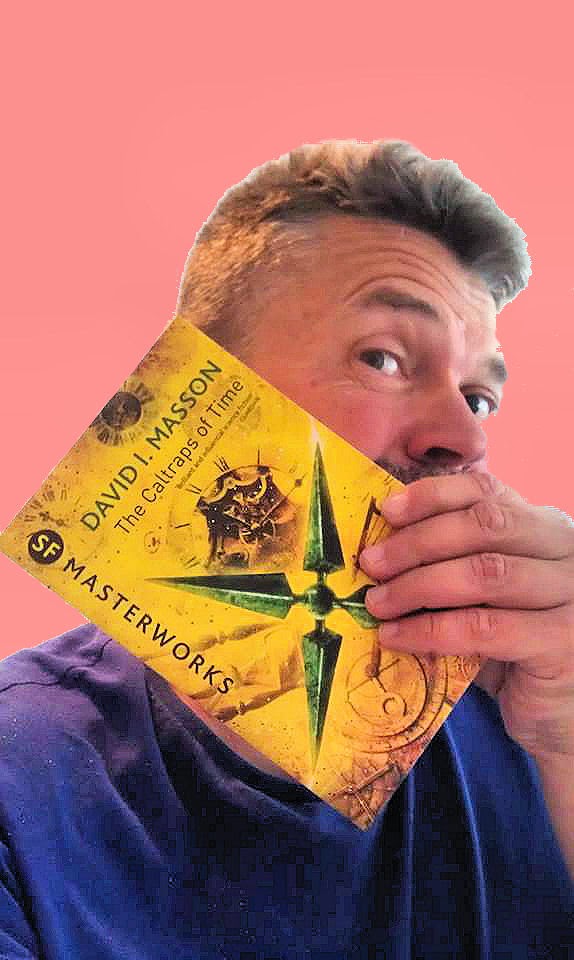 I have just finished reading this. It's science fiction but not the conventional sort. The stories within are more concerned with with the redefining of experiences and situations, with language and communication and the subtleties of meanings under the stresses of time dilation and time shifts, than with the standard themes and props of the genre...

David I. Masson flourished briefly at the end of the 1960s thanks to New Worlds magazine and 'New Wave' SF, which encouraged experimentation and a heightened awareness of literary techniques. It was a cultural progression within the genre that sought to broaden the horizons of readers and thus the next generation of writers, and although the general impact wasn't quite as revolutionary as had been hoped, it did sufficiently change enough perspectives to make a full return to ordinary SF almost inconceivable.

There were many failures among the 'New Wave' experiments but in my view the successful work that emerged made the whole movement worthwhile. Masson was one of the best products of this shift, though hardly typical of it; and The Caltraps of Time, his only book, contains the entirety of his oeuvre: ten stories that are radical enough to earn him lasting respect as a highly original and significant intellectual writer.

The first story in this book is also the earliest, 'Traveller's Rest', and it is really very remarkable, the sort of thing that Stanislaw Lem or Borges (if Borges had done SF) might have written. 'Psychosmosis', 'Mouth of Hell' and 'Lost Ground' are also superb. Masson is a bit like a cross between John Sladek and the Strugatsky Brothers with a touch of Ian Watson. For a small minority of SF writers the question "Is this possible?" is less important than "Is this logically rigorous even though it's impossible?" And generally I prefer fiction that takes the latter approach to the former because it seems more conducive to greater imagination and invention. 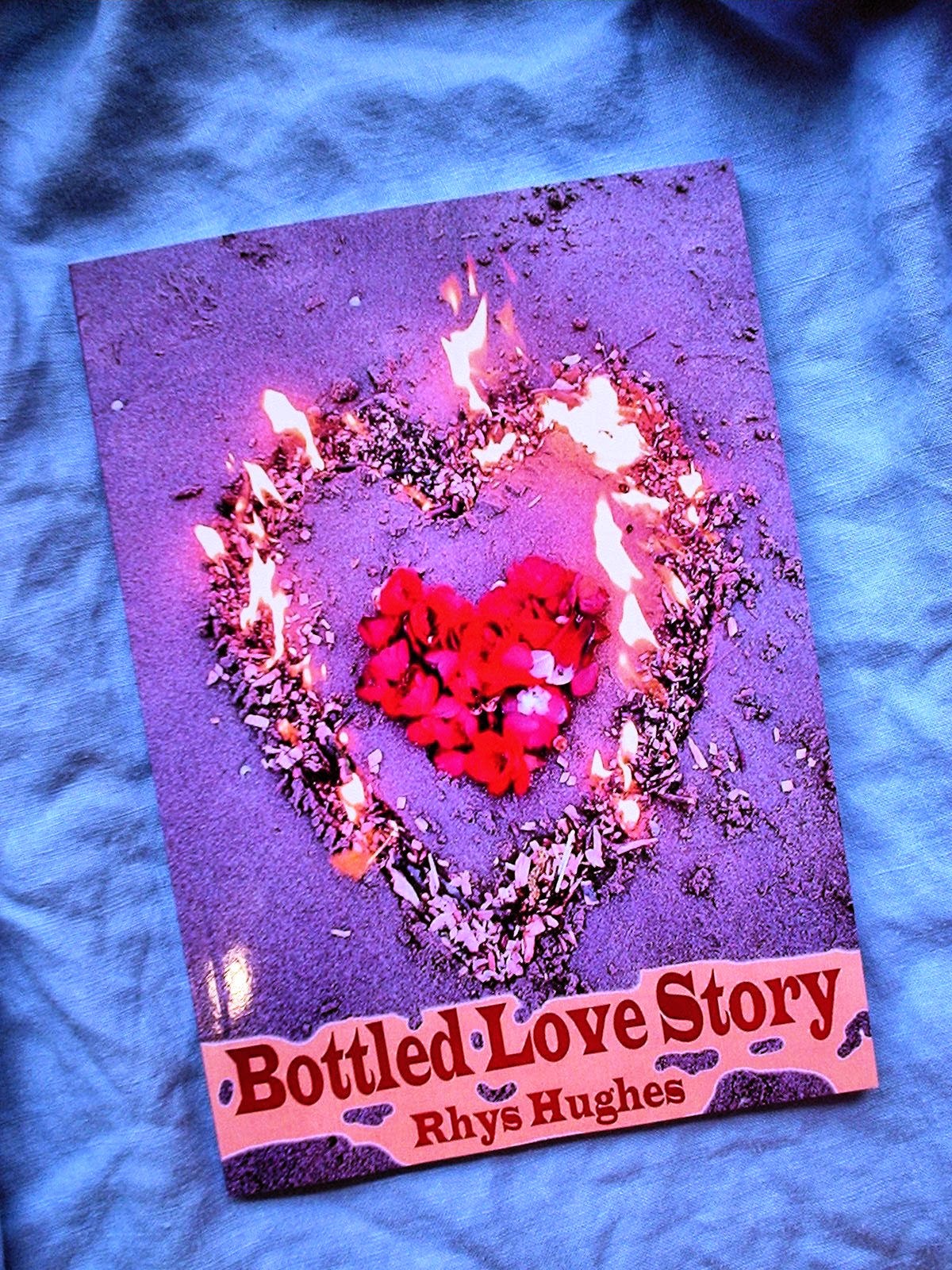 I was challenged to write a love story by a dear friend. It wasn't really a challenge but just a question, "Have you ever written a love story?" The answer was no, not really; so I decided to make a proper attempt. I have in fact written one or two love stories in the past ('The Lute and the Lamp' for instance) but now I really wanted to strive to produce something much more substantial with love as the main theme.

From the outset I knew that any love story I might attempt was going to be not only 'magical realist' in tone but firmly located at the more fantastical side of that spectrum. I worked feverishly on the piece, almost in a state of heightened awareness, and the final result was a novelette, Bottled Love Story, which I now feel able to announce openly in public.

"Love can't be bottled but it might arrive in a bottle... Love is a game like chess but with smiles, winks, laughs and kisses for pieces... Love is a problem. Is there a solution? Join the woman who has no need for romance and the sailor from another age as they simultaneously attempt to accept and avoid the designs of destiny."

That's the blurb I wrote for it. The story is rife with typographical tricks and contains images as part of the essential dynamic of the text. This is something I have always been interested in and something I want to explore more fully and deeply in future: the manifold possibilities of form. In recent years form has been somewhat neglected in favour of 'substance' and the days when someone like B.S. Johnson could insist that holes were cut in the pages of his books (in order to facilitate a rather emotionally charged trick that turns out not to be a trick at all but something authentic) are long gone. This is a shame. Form can have no less an impact, both emotional and cerebral, than content. 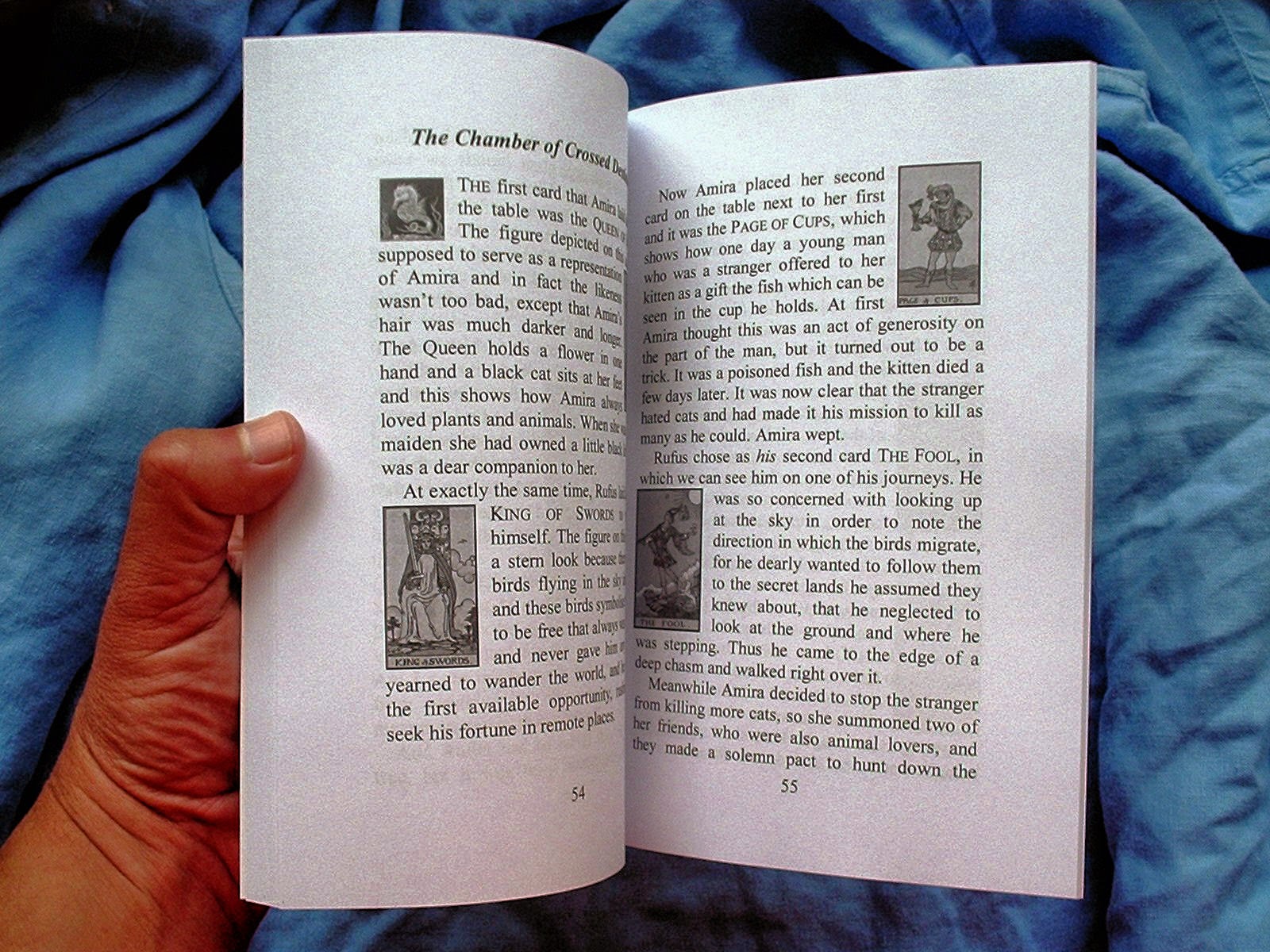 One section of the novella is my attempt to write a story determined by Tarot Cards in the way that Italo Calvino did (so spectacularly) in The Castle of Crossed Destinies. This was the first Calvino book I ever read, thirty years ago, and it changed my views on literature forever.

As I said, Bottled Love Story is a novelette, only 14,000 words or so, but I feel that it is much bigger in its sensibilities and story than the actual length would suggest. The paperback can be bought from Lulu or from Amazon...

I also wanted to turn it into an ebook, but the complex typography defeated my attempts to format it. So I am going to offer it as a PDF to anyone who wants it in this form, at the very reasonable price of 50 pence. Please use the Paypal button below to order it in this form and I will email it to you promptly. Don't forget to specify your email address!