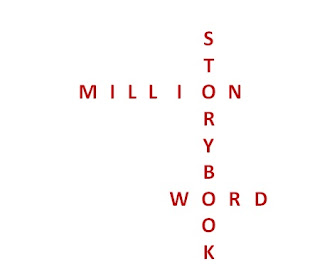 The longest single author collection in publishing history is now available for pre-order. It can be ordered from the various Amazon locations in various countries. The British Amazon locations for this book are here or here.

Why two locations for one book? This is because The Million Word Storybook comes in two editions, Male and Female. They differ in approximately 10% of their contents. This is (I could argue) because men and women are almost the same but not quite.

I am often asked how I selected the material for inclusion in the two editions. The answer is that I did it randomly. There is no deep meaning behind the 'male' and 'female' tags, no attempt to put more action stories in the former edition and more romantic tales in the latter. Nothing like that at all. I just wanted to be like Milorad Pavić, still one of my favourite ever authors, whose Dictionary of the Khazars also comes in a male and female edition. Those editions differ by a single paragraph; but that paragraph makes a big difference to the story (supposedly).

I think that this is the longest pause between blog updates since I started this blog almost 11 years ago. I do feel that the day of the blog is coming to an end; or rather, that they aren't as fervently read as they once were. We will soon be saying that the phenomenon of the blog was a craze, a fad, just like the yo-yo, hula hoop, space dust and skateboards. Those things haven't gone away; they just no longer enjoy universal appeal with a touch of hysteria about it. The bicycle clearly was a fad back in the 1890s. Many stories I have read from the era attest to this. H.G. Wells' early novel The Wheels of Chance is based on the fact that cycling had suddenly become almost a necessary pastime for all classes of people. It stopped being a fad but the bicycle still exists and is still the most wonderful means of transport.

Anyway, there is plenty to talk about, but I shall restrict myself to brief snippets plucked at random. It was the birthday party of my friend Tseng Lan Hui and I helped to organize her party. Lots of music, dancing, food and drink in a village hall near Tenby. There have been less beach parties this year, but I hope there will be at least one or two more before our summer comes to an end. People often assume that I mix with other writers, but generally I don't. My friends tend to come from other walks of life and the answer as to why this should be so is simple. I spend so much of my time thinking about literature and writing, about ideas for stories, about style and plots, that when I want to relax I really don't want to think about this subject, about literature. I crave stimulation from other sources.

I have been busy attempting to make my entire back catalog of books available as ebooks. It has taken a lot of work. Nowhere Near Milk Wood has been added to the list; Twisthorn Bellow also; The Crystal Cosmos... and quite soon I will be in a position to release what is surely the longest single author collection in publishing history, The Million Word Storybook. This will appear in two editions, male and female, that will differ in approximately 10% of their material. The male/female trick is something I learned from Milorad Pavić, still one of my favourite authors. I have also just signed a contract for two new books for a very interesting press; and I am putting together two other books for publishers. The fruits of these particular labours should be ready to sample next year and the year after.