I wanted to Remain but... 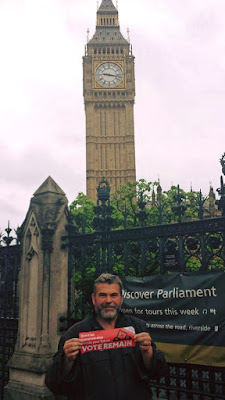 It has been a tumultuous week in British politics. I might as well state that I was a big 'Remain' voter and my side lost. It's as simple as that. I fear for the future of this country, although I am fully aware that there's no point worrying about it too much. Here is a photo of me campaigning (futilely) last week in the centre of the maelstrom...

But this blog is supposed to be about writing only. Writing and reading. I have become, in the past few weeks, a big fan of Richard Brautigan. Even at my age, I am still discovering writers new to me who enthrall and inspire.

A Facebook friend of mine asked me to put together a reading list of 'essential' books to read and I have been musing about doing so ever since. It will be a big job and I fear I will leave some important names out by accident, but I may well attempt this. Apart from Brautigan, other authors I have been enjoying this year and who I would add to such a list include V.S. Naipaul and R.K. Narayan.

I have been adding stories to The Platinum Donkey blog, where they can be read online for free. The latest addition is 'The Furious Walnuts' which I wrote 21 years ago and which is about the breakup of the UK.

My main writing project at the moment is a weird Western called "The Honeymoon Gorillas".

I am currently in the process of pitching two new books to publishers for future years. Let's see what happens. My next published book will hopefully be the updated and expanded Sangria in the Sangraal collection of linked short stories.

I am delighted to have a piece included in this book. Published by Future Fire (long one of my favourite review sites for speculative fiction) the anthology contains a diverse selection of material. There is an official book launch next Wednesday (June 22nd) in London, which I will be attending.

It may well be the last literary event I attend in the UK, as if all goes to plan I hope to be leaving the country before too long (this depends on finances, of course).

So if you happen to be in the area, come along! Various contributors will be doing readings; and I plan to read a brand new (i.e. unpublished) story with a Mediterranean theme, as this seems a nicer idea that just reading the same piece that appears in the book itself.

The venue is The Plough in Bloomsbury (27 Museum St, London WC1A 1LH) and the event begins at 6pm.


Twenty years ago I wrote a short novel called Elusive Plato in which I attempted to be vastly more ambitious, thematically, stylistically and metaphysically, than I had been in any of my previous work. It was my effort to move up a level and I believe I was successful. It still seems like a quantum jump.

The novel was published together with a novelette in a single volume by the long-dead Tanjen Ltd a couple of years after it was completed. Tanjen were a small press notable for publishing early work by two writers who would go on to become major successes with the big publishing houses -- Tim Lebbon and Neal Asher -- but they didn't last long before they folded. That's often the way with small presses. 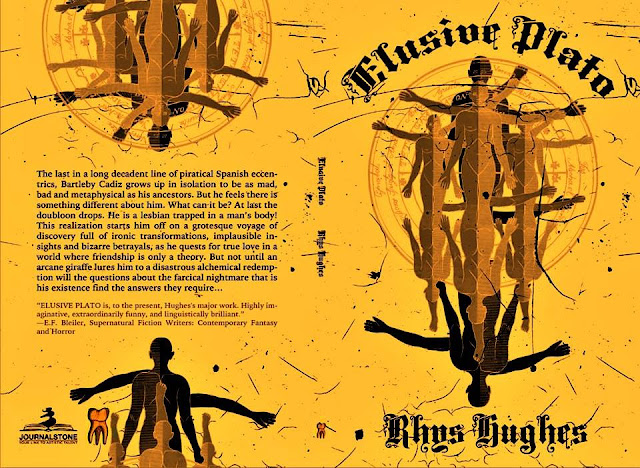 Elusive Plato received excellent reviews. The late great critic and literary pundit E.F. Bleiler was especially effusive with his praise in his Encyclopedia of Supernatural Writers. He claimed it was my best work. And so it surely was. I worked hard to put original invention into it and yet at the same time to connect with some deep and mysterious, undoubtedly atavistic, parts of the human psyche.

A picaresque, like much of my fiction, the novel resembles a grotesque chess problem in which the pieces are taboos and each move leads to a situation of changed landscapes and circumstances that require further moves towards the inevitable checkmate. The mating of the king is more than symbolic. It is a geometrically precise nightmare.

I am delighted to announced that two decades after it was first conceived and executed, Elusive Plato has been republished by Bizarro Pulp Press. I feel that the Bizarro scene is a perfect home for this book. I offer my thanks to Vincenzo Bilof, my editor. The cover is by the brilliant designer Matthew Revert. The book is available from Amazon UK and Amazon US and other outlets.