I finished writing my 'weird Western' The Honeymoon Gorillas and I am delighted with it. I have a publisher who has expressed some interest in seeing it, but I have to wait until next year before submitting it. That's the publishing world for you. Things tend to move slowly, at least more slowly than authors would like, certainly slower than this author would like...

The projects I am currently working on include a new book for Bizarro Pulp Press that is a collection of novelettes and stories about ghost comedians. It is going to be called, appropriately enough, The Ghost Comedians. With luck it will be finished this year and I will submit it then. One of the novelettes is a story I first started writing when I was 15 years old. That uncompleted version was lost ages ago, but I always fondly remembered aspects of it, and I am re-using them in this new version, hopefully in a much improved form. 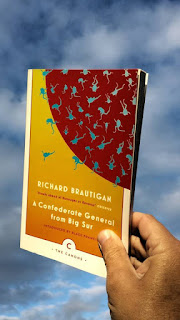 Another project is something I have only started writing very recently. It has taken more years than it should but I think I might have found an approach to writing that is more suited to what I do well and avoids me having to attempt what I don't do well. It's not really a style but a different way of handling my material; namely a method of linking fairly abstract routines into a whole without having to worry so much about narrative drive, characterization, plot and other conventionalities. I have started a new work utilizing this approach which is called Cloud Farming in Wales. Let's see how it progresses...

This technique is one that I am borrowing from Richard Brautigan's Trout Fishing in America, which I read recently for the first time. I only started reading Brautigan this year, although he was recommended to me years ago. Of his twelve prose works I have already read seven and plan to read the others as soon as possible. His later books such as The Hawkline Monster and Sombrero Fallout show a neater structure than his earlier; and yet it is his first two 'novels' that seem to contain the greatest potential and originality; they are fluid, disjointed, often abstract, yet deeply rich.

I no longer collect books. I read them and then give them away. I have a pristine copy of his first published novel (the second to be written) A Confederate General from Big Sur. Anyone who lives in the UK and wants it for free, just email me at rhysaurus@gmail.com and I will mail it to you. First come, first served. 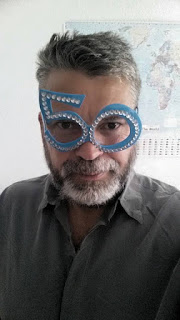 I have neglected this blog and yet it still isn't quite dead...

Many things have happened to me this year but I simply felt less of a need to talk about them in public. I ought to say, however, that I am now 50 years old. My half-century birthday arrived! This means that twenty of me would constitute a millennium. Forty of me would be two millennia. A normal bus easily holds forty people; such a bus full of copies of me would be full of enough years to stretch back to the glory days of the Roman Empire.

I continue to find this surprising, I don't know why. But age, of course, is not really about how many times planet Earth has orbited the sun. That is only an astronomical measurement; and organic creatures age biologically. I am an organic creature. My age depends on health rather than time. Keeping myself fit is a priority.

I have updated The Platinum Donkey blog, where a selection of my stories can be read online for free. There are now 44 stories on that blog; and one day I intend for there to be exactly one hundred.

Anyway, I guess I will try to make more of an effort to update this blog. My latest book was published recently and I should have copies soon, fingers crossed. I will talk about that when I have the copies in my hands, in these half-century-old hands of mine...