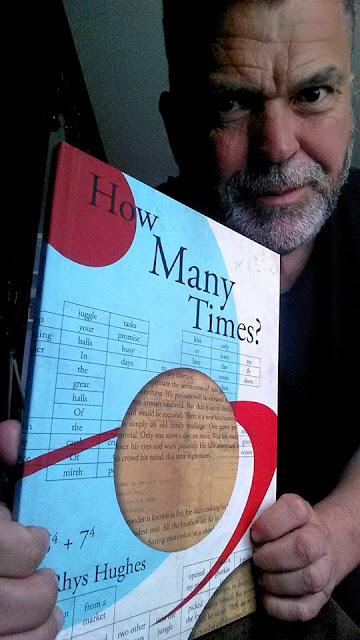 My new book has just been published and this one is a little different from all the others, even though all the others are already rather different from each other. It is different because it's a collection of experimental OuLiPo fictions. I have talked about OuLiPo many times over the past thirty years. It is a type of writing that is still relatively unknown in the English writing world.

My book contains a selection of OuLiPo works that are divided into categories. In the first section, there are stories in which I applied simple arithmetical rules to the creation of the texts. These are stories that consist of x sections, each section with x paragraphs, each paragraph having x sentences, each sentence made up of x words. The value of  'x' increases from one to seven, therefore the lengths of the texts rapidly increases too. The texts are individual pieces, yet they also work together to create a sum greater than the parts.

The second section features stories with a much more complex structure. OuLiPo is about the application of logical constraints that must be adhered to strictly in order to stimulate the imagination and push the creative impulse in unexpected directions. There are many official logical constraints and in the past I have applied several of these to various tales. But I also wanted to invent my own constraint and thus I devised one that I call "greater or equal to 2n plus one" because it consists of story grids that can be read coherently across each row, down every column and along the main diagonals, but it is also possible that other unplanned stories exist on other diagonals or in meandering courses through the grids. Some of the more advanced grids are asymmetrical and present even greater opportunities for readings paths.

The third section is a logico-erotic story in which the workings of progressively more intricate logic gates control the action of the sexual partners who are the objects of the study. I wanted to combine two seemingly irreconcilable functions, namely sensuality and logic. The boolean algebra that determines the outcome of each encounter therefore acquires a physicality that is surely quite new and unexpected.

My book can be ordered directly from the publisher here or from Amazon and other online bookshops.