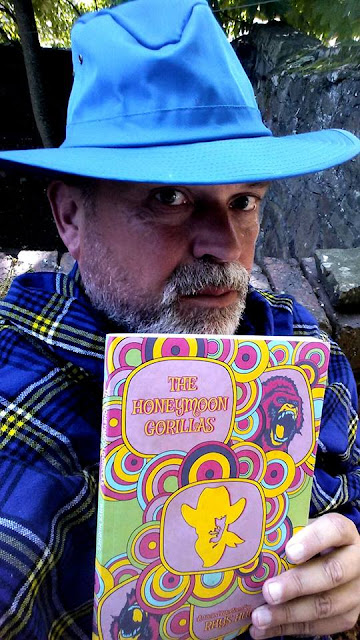 Two years ago I began writing a story that turned out to be the first chapter of a novel, a weird Western that became very weird indeed. I had the title The Honeymoon Gorillas in my head for years before finding a use for it. Gorillas play only an indirect part in the book but it is an important one nonetheless. They are always-present but never seen.

I have wanted to write a weird Western for a long time. This urge was considerably amplified by the weird Westerns of two great writers that I enjoyed immensely, The Hawkline Monster by Richard Brautigan and The Place of Dead Roads by William Burroughs. Both have been an inspiration on my own novel to some extent.

The Honeymoon Gorillas has now been published by Bizarro Pulp Press. It's available from Amazon and other online bookstores. A brief resume of the novel follows:

"Spud Gunn is the son of Hopalong Beech and Una Gunn. When his parents split up he begins his travels through the West, a place of myths, tall stories and strangeness. On his journey he has many peculiar encounters with the characters who inhabit the West and he begins to suspect that something is not quite right about the world he is living in. Could it be that this West is just a simulation? If so, for what purpose was it created? Before he finds the answer to this and other questions, he will have to evade the unusual attentions of a troupe of lethal roving actors, the schemes of fake orientals, the catastrophic effects of asteroid strikes and the fury of a giant who is one of the original gods of the West and who has been assembled from his scattered parts in order to break down the walls of existence and reveal the truths beyond.... But what does this have to do with gorillas? Rather more than it may seem to the casual eye!"

This novel was one of the most fun projects I have ever worked on. In fact I will go further and say that it was the most fun I've had working on a book.

This very morning I received my author's copies, so I decided to take some thematically appropriate photos that might help to promote the novel. This is one of them.