My Ear is South America! 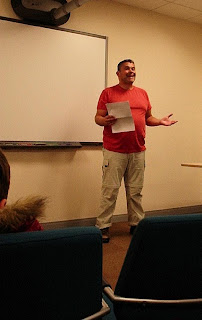 Last night I attended the launch of Bob Lock's second novel, The Empathy Effect. It's available from Screaming Dreams at this very moment. Bob is an extremely engaging fellow, and it was also nice to catch up with Steve Upham and Brian Willis again. I was flattered to be asked to make a contribution to the evening, so I read three examples of 'flash fiction' from a collection I have recently put together, Flash in the Pantheon. This photo shows me in the middle of declaiming. My thanks to Bob for the opportunity!

The location was the 'Discovery Room' in Swansea Central Library, where my own extremely belated launch of The Postmodern Mariner will take place on December 11th. The launch of that book is actually only one part of a larger event that will be called WEIRD WALES: an entire afternoon of readings and lectures, featuring a talk on Arthur Machen, and a serious examination of the kinds of genuine spooky phenomena that Wales abounds in, for example ghosts, sea serpents and UFOs. It seemed to me a good idea to broaden the appeal of the event. More details coming soon, when I've worked them out! 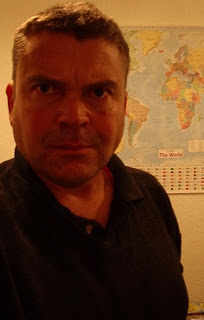 A few days ago I completed my 558th story. It was the last 'chapter' in my Tucked Away in Aragon sequence of interlinked fantasy tales set in Albarracín, perhaps my favourite Spanish town, certainly the most picturesque I saw on my travels! Yesterday I submitted this short book to a publisher, and now I'm waiting to see what he thinks of it. Although these Calvinoesque tales are exactly the kind of thing I most enjoy writing, I suspect they may be too whimsical for his taste. We'll see!

So now I'm free to return to completing the final story of my proposed collection The Brothel Creeper. The story in question, 'The Quims of Itapetinga', is one I have been planning for a very long time, but the concepts that drive it are so strange and warped that I find them difficult to work with -- they demand not only heightened mental concentration but a sort of spiritual energy too. It's a very intense story to say the least! I think it might turn out to be among my very best, if nothing goes wrong. Things can go wrong at any time; I'm acutely aware of this fact. Here's a photograph of something that went wrong yesterday... My left ear turned into South America! My novella, The Coandă Effect, is now available for pre-order from the Passport Levant imprint of Ex Occidente Press here.

It's a deluxe collector's edition, limited to only 100 copies.

There seems to be a lot of interest in Corto Maltese. I asked random contacts on Facebook for taglines for my new book. Bruce Sterling in his interview told me that this technique is called 'crowdsourcing'. Here are some of the (mostly bizarre) suggestions I've received in response...

* "With a Gibraltarian witch for a mother and a Welsh father with ties to sorcery, Corto Maltese was destined to be one thing, a pirate." -- Bob Lock
* "‎Not the first in a 10 book series!" -- Tony Lee
* "Corto Maltese...the lighter way to enjoy chocolate." -- Gary McMahon
* "Corto Maltese - he'll make you cross! Ooh." -- Rosie Scribbler
* "The Light Fantastic." -- Huw Rees
* "The wind in his hair, the salt on his lips, danger around every corner, and intrigue straight ahead." -- George Ibarra
* "Every moment in time has a story and every story a time..." -- Robert N. Stephenson
* "Balls out, who's publishing it?" -- Rod Heather
* "A full cast of wacky characters, including a Belgian pirate!" -- Tom Alaerts
* "Melts in your hand and not in your mouth." -- Steve Lockley
* "Do not open this book if you are in the least bit prone to incontinence, as the laundry bill will ruin your finances." -- Ian Alexander Martin Other news: I've just finished writing my 555th story. I'm sure this number is significant, but I can't really say why! The story that falls under that number is called 'Sangria in the Sangraal' and is part of my Tucked Away in Aragon story-cycle, which is now 70% completed. When that brace of tales is ready I plan to send them to the same publisher who is issuing The Coandă Effect, even though they take place in Spain rather than Eastern Europe (the preferred location for the fiction published under the Passport Levant imprint). My justification for this is that they are mostly set in Moorish Spain, when the west was the east (long before the east became the west). 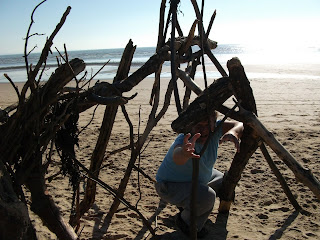 I have been busy putting together yet another collection. All this story gathering is starting to become excessive; I have put together far too many books already this year. I don't expect them all to appear in the near future; some of them may have to wait for years or they may never appear at all. Who knows?

But this collection is something I have been working on for a long time. It's a set of microfictions, exactly one hundred of them, called Flash in the Pantheon. These ultra-short stories span almost my entire writing career; the earliest dates from 1989 and the most recent was completed a few days ago. First I put them in strict chronological order, then I decided that random order was better. Now it's time to stop tinkering and leave them alone.

There are many kinds of microfiction: the 50 word 'mini-saga', the suggestive '69er', the 100 word 'drabble'. All have one thing in common: they impose a creative fetter on the author. Poets who work with strict metre and rhyming schemes are no strangers to creative fetters, but prose writers rarely use them; and yet, by limiting the chaos of almost infinite choice, they can be highly beneficial as aids to invention and originality. Paradoxically, words in cages can be more free. The above photo shows a less symbolic cage, with me inside. I don't know if the metaphor is fully transferrable, however... 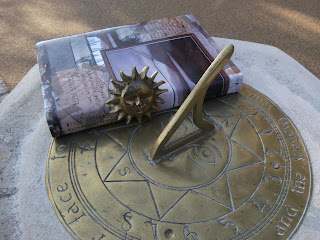 My favourite microfiction of all time was written by John Barth. It can be found on my Gloomy Seahorse site here. Something this ingenious is extremely difficult to match. My own approach to the microfiction question is often to link many together; each one should work alone but the sum should also be a complete epic in miniature. The recent anthology Blind Swimmer features one of my efforts in this vein, a story entitled 'The Talkative Star'. It's the kind of fiction I most enjoy writing, namely Calvinoesque whimsy; but in Britain this seems to be a minority taste and it takes a special editor to appreciate that what seems lighthearted may also be profound.

Fortunately, David Rix of Eibonvale Press is exactly that sort of editor, a gloriously eccentric individual who runs a gloriously eccentric independent publishing house that creates books that don't look like any other books from any other press. The theme of Blind Swimmer is 'creativity in isolation', one of the best themes I have been offered by any editor. I chose to write about our sun, because the sun itself is one of the most creative forces in one of the deepest isolations imaginable, but I made him sentient.


The Victorian monster that appears in my previous blog entry is the last in the series. All six together comprise my first self-illustrated story. I have an abiding affection for tales that utilise images as an essential complement to the text, in the manner of certain Donald Barthelme stories, and I have written and published a few examples of this form in recent years; but never before have I done the drawings myself. I hope that ‘Monsters of the Victorian Age’ will appear in a future book; but in the meantime the finished piece is available online here. 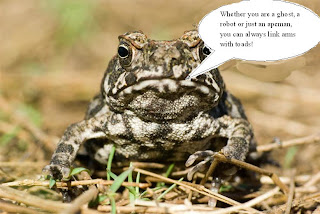 Speaking of the great Donald Barthelme reminds me that I have cited him as one of the spiritual godfathers of ‘Romanti-Cynicism’ in the Afterword of a new collection I’ve just put together: a showcase of romanti-cynical stories from the past seventeen or so years. But what is romanti-cynicism? It’s a literary movement I founded when I was younger. Romanti-Cynical fictions simultaneously take themselves very seriously and mock themselves; they have one foot in sober existentialism, one in ironic satire, one in progressive science fiction, one in nostalgic utopian fancies, one in magic, one in naivety, one in cunning, one in fable, one in rationality... with the crucial point being that the total number of these feet is always startlingly greater than feasible. Even a millipede couldn’t manage so many!

My showcase volume is entitled Link Arms with Toads! and I submitted it to a publisher two days ago; so I can’t yet be sure it will ever see the light of day. “Link Arms with Toads!” is the motto of the Romanti-Cynical Movement. What does it mean exactly? I’d like to say that I’ve forgotten or that I never really knew, but the truth is simple enough: whether you are a ghost, a robot or just an apeman, you can always link arms with toads!

Bruce Sterling isn’t a romanti-cynical author; but he’s a tremendous writer all the same. A genius, in fact! My interview with him for La Stampa is now available in English. Here it is. This version is actually longer than the one in Italian. 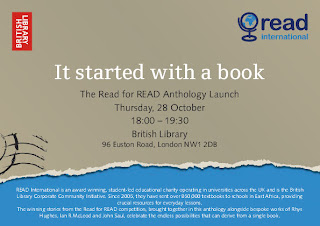 What else? I think I ought to mention that there's a book-launch and reading at the British Library, London, on October 28th in aid of the "Read for READ" charity anthology. READ International is a charity devoted to increasing literacy by shipping free books to Africa. So far they have shipped nearly 1,000,000 books. They are publishing an anthology to raise money for the charity. This anthology contains the winners of a short-story competition held earlier this year, and also a few guest stories by a handful of invited writers. It's a cause I believe in, and I'm in the book with two stories, one written specially for the charity; so I may be going to the reading if I can drum up the cash for a visit to ultra-expensive London. The British Library is one of the finest venues for a book-launch in the world; and if you happen to be in the area at the time, I definitely recommend going to this event! Click here for more details.

Monsters of the Victorian Age #6 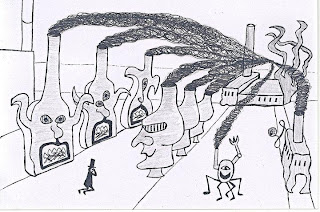