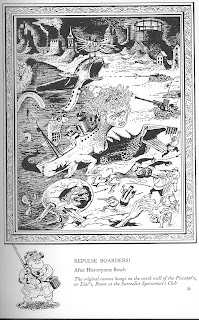 The original Exploits of Engelbrecht was illustrated by James Boswell -- a man who should be even more famous than the other James Boswell (the biographer). I once came across a Boswell exhibition by accident while killing time in London. Boswell's satirical work is second to none, his grotesques as moving as those of Mervyn Peake, his elaborations no less intricate than Heath Robinson's. A New Zealander by birth, he spent most of his life in England, eventually becoming the art editor of Lilliput magazine, perhaps the finest ever Fleet Street publicatio 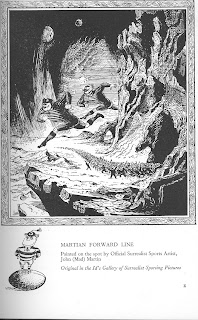 When Richardson's Engelbrecht stories were collected in book form by Phoenix House in 1950, Boswell's illustrations graced its pages. Richardson was mercifully vague with descriptive details of his characters and it was left to Boswell to depict the dwarf in all his diminutive glory. Each of Boswell's illustrations for the book is a clever parody of a work by a different famous artist. Here we see parodies of Hieronymous Bosch and John Martin.

Although Boswell depicted the dwarf in many bizarre and hilarious situations, he never drew the other members of the Surrealist Sportsman's Club -- the Old Id, Chippy de Zoete, Tommy Prenderghast, Lizard Bayliss, etc. That's a shame. Whoever first owned my copy of the Exploits of Engelbrecht obviously felt a need to fill in the gaps. The flyleaf contains his (or her?) pencil sketches of seven other members, including the narrator A.N. Other. 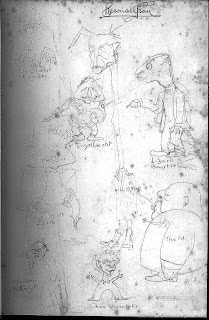 When I was writing Engelbrecht Again! I used these crude drawings as the basis for the way I visualised the relevant characters. The Old Id is shown in profile with only one leg visible -- that's why I made him a monopod. I have no idea who that amateur artist was. I can't even read the signed name clearly. It might be Rownal Gray -- something like that. I mention my gratitude to this unknown person in my essay on why I wrote my Engelbrecht novel -- an essay that is now an afterword in the book itself.
I believe that Engelbrecht Again! is on its way to the printers any day now, maybe tomorrow. More than eight years have I waited for it to be published. I was 33 when I wrote it. Now I'm 42. Tempus? Fugit!
# posted by Rhys Hughes @ 9:12 AM 2 Comments 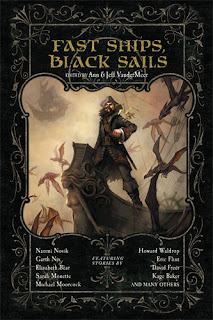 September 19th was International Talk Like a Pirate Day but I missed it again. I keep forgetting about it, the same way I forgot about Different Coloured Eyes Day back on June 12th. Maybe there should be a 'Forgetting All About International Days Day' for people like me so that I can symbolically join with like-minded souls and un-celebrate the occasion!

I'm able to be more piratical than usual this year for several good reasons, one of those reasons being the imminent publication of Fast Ships, Black Sails, an anthology that features a slew of pirate stories by such hearty pen-lubbers as Howard Waldrop, Steve Aylett, Michael Moorcock, Garth Nix, Elizabeth Bear and myself!
Apparently there will be a film and a song to help promote the book. A short extract of the film can be found here, partly featuring me, reading a selection of my own words with my own mouth while dressed in one of my own shirts. Bully for me, I say!
# posted by Rhys Hughes @ 11:09 AM 1 Comments

We went to Pembrokeshire for the weekend, Adele and I, and made the most of the nice weather to explore part of the long distance footpath. First we caught a train to the q 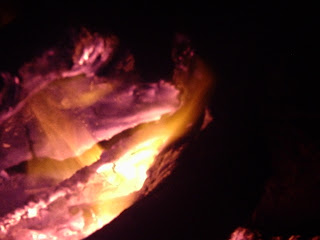 uaint village of Manorbier, birthplace of Giraldus Cambrensis, and then we hiked the coast all the way to Barafundle Bay. The scenery was spectacular, even better than that of the Gower. A few photos of our walk can be found here. When we reached Barafundle beach we collected enough driftwood for a fire and watched the moonrise while drinking wine, one of the best pleasures in life.

It got quite cold in the middle of the night and the fire went out long before dawn. Then we saw a fox approaching our camp site. Almost before we knew what was happening he snatched the bag containing my food and ran off with it! I hope the rascal enjoyed my Bombay Mix... As if that wasn't cheeky enough, he returned later to steal Adele's bag of food! This is the first time we've ever been outfoxed by a fox! Despite being deprived of breakfast we didn't complain too much -- the sunrise was one of the best anyone could ask for.

I Found the Higgs Boson at the Bottom of a Bag of Particles... 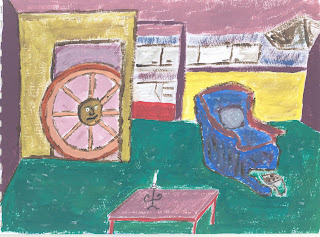 Last Wednesday the LHC (Large Hadron Collider) was started up on the Swiss-French border not far from Geneva. Scare stories about how this machine might destroy the world with the accidental creation of black holes, strangelets or an expanding bubble of true vacuum (as opposed to the false vacuum that probably fills the universe) were simply ignored by me until I discovered that one of the scientists in charge of the project was Welsh -- Dr Lyn Evans from Aberdare. Then I really did begin to panic!
Fortunately I remembered that the Welsh are just as bad at destroying the world as 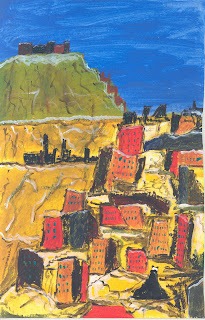 not destroying it -- in fact we are bad at everything: we can't even do minor catastrophes properly -- and so I relaxed again. With a Welshman in charge of the LHC, absolutely nothing of significance will happen when those massively accelerated protons smash together. It might rain a bit. Someone chubby might get drunk. It might rain a bit more.
This has absolutely nothing to do with the pictures displayed here. Because I don't know when enough is enough, I have persisted with my dreadful painting hobby. Here are two more feeble efforts. Weep O art lovers! The titles of these 'works' are as follows:
(1) Wheely Tired: the Spokesman Comes Home from Work
(2) Tsaparang
# posted by Rhys Hughes @ 6:31 PM 1 Comments 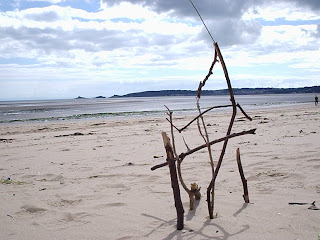 Having recently dabbled with painting I clearly decided that sculpture was the next artform that needed some input from me. Why this delusion entered my head remains a mystery, as I don't have an artistic bone in my body. Fortunately I have plenty of artistic gristle and artistic mucus instead -- and I'm also full to bursting with false modesty. The outcome? A beach sculpture entitled 'Driftwood, Driftwon't'.

I'm currently busy writing an essay explaining how and why I wrote Engelbrecht Again! This essay will include decoded versions of the two encrypted passages in the book and will appear as a chapbook issued free with the novel itself. I used to write lots of essays but I hardly ever do so nowadays. I find non-fiction more difficult to compose than fiction -- or to put it another way, imagination is easier than accuracy, for me at least.

My story 'Mandando a Liberdade Para Longe' has just been published in the webzine Phantastes and can be downloaded here.

I'm delighted to announce that my Mister Gum novel has already been accepted for publication by Doghorn. With luck it should be available as a trade paperback next year!

In the past few days I have been planning a new story cycle set on the 'Counter Earth' -- a twin of our own planet that orbits on the far side of the sun. The Counter Earth (or Antichthon) has a long and venerable and daft history and has already been treated by such luminaries as Philolaus, John Norman and Gerry Anderson, and seems a perfect setting for some of my own outrageous tales. I don't have an overall title for the sequence yet but I do have titles for a few individual stories -- 'Whoops a Buttercup', 'Hubble, Bubble, Toil and Minor Disturbance', 'Gin and Chthonic', 'Ecky Thump and Old Earth', etc.

See the Dwarf and See the Giant 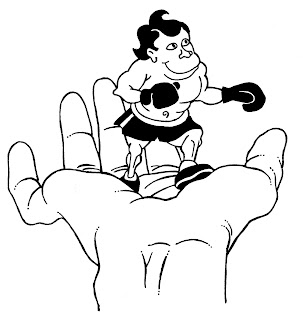 The Old Id is a malign giant monopod who rules the Surrealist Sportsman's Club with not only a fist of iron but an open palm of depleted uranium... Where he hops, the other members are compelled to follow: generally from one utterly absurd and totally lethal 'game' to another. The Old Id won't stop until membership of the Club has reached zero or less. Only Engelbrecht, the dwarf boxer, who has floored more clocks, fruit machines and zombies than any other surrealist pugilist in history, stands a chance of coming through safely to the other side, and even he can't possibly be prepared for the ordeals awaiting him in this book -- surfing the solar wind; playing bagatelle with meteorites and skyscrapers; dancing the tango with the three Borges Twins, Tlön, Uqbar and Orbis Tertius; hanging out with Vathek and Père Ubu; unravelling the enigma of the Chronic Argonauts; and much much worse!