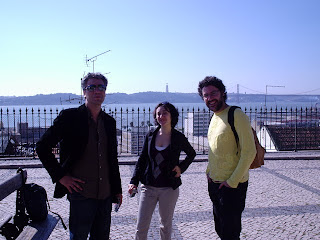 Lisbon treated me well -- as it always does.
Such a beautiful and interesting city! One of my favourites in Europe...
This photo shows three people fundamental to the creation of my Sereia de Curitiba book. Publisher Pedro Marques, translator Safaa Dib, and illustrator Paulo Barros...

My heartfelt thanks to this talented trio, also to Luís Rodrigues, computer genius, and to everyone else involved in the Sereia events...

For instance... to the British Council, who paid for my flight from Madrid and provided a five star hotel for me... to Isabel Lopes, their representative, who met me at the airport, chauffered me around the city, took me to Belem for pasteis de nata and was extremely good fun all the time... to the teachers and students at the Faculdade de Ciências Sociais e Humanas, who were extremely lovely in every way... to the staff of FNAC... to the waiters of the Chiado café where I read... to all the lovely people who took the trouble to say hello and make me feel welcome -- and hugely welcome I did feel! 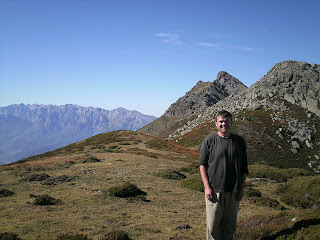 I've just come back from the Picos de Europa, the most beautiful mountain range in Spain. I stayed in Rosa's communal farmhouse, a tiny stone building in the middle of a forest, with a dozen other people. Wild horses, wolves, lynxes and even bears dwell here -- in the forests, not in the house! Cantabria is now my favourite region of Spain. We used candles for illumination and toasted ourselves in front of a blazing wood fire and drank water from a fresh mountain spring. This kind of life is the best!

We climbed Peña Sagra for a spectacular view in all directions. To the north the Mar Cantábrico was a gorgeous blue, creamed with fluffy clouds on the horizon. This was the first time I'd seen the sea since my night at Osel Ling more than two months ago. It was overwhelming. The weather was perfect. Near the summit we had a picnic, then we descended through autumn trees in the sunset. There were eagles above us but no other climbers. The contrast with overcrowded Madrid was almost too extreme!

Many things have happened in the past week or so, but after this expedition I feel too zonked to write about them. Briefly, I met Luis Prado again -- Bibliopolis is a truly marvellous publishing house in every way. He gave me money for my book. I was vastly pleased. Last night I went to a gig in a jazz club. Rosa seems to know everyone in Madrid. I am preparing myself for Lisbon next week and Seville the week after. Mucho delight is mine! Photos of my trip to the Picos are on my flickr account here. 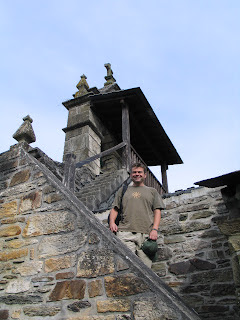 I had an enjoyable extended weekend that began on Thursday and ended in the early hours of Monday morning. On Thursday evening I went to a club in Madrid (I'm not sure where) for a 'World Music' night. In practice this meant jazz bands from Brazil and Algeria with some great playing from excellent musicians. There was also free wine, beer and food: as much as I wanted... I have encountered a lot of free drink and food on this trip. Coincidentally free is my favourite price in the world! (My second favourite price is 1 cent and my third favourite is 2 cents, but my fourth favourite is 4 cents, not 3 cents... Peculiar, no?)
Friday morning I set off with Rosa for the north eastern corner of Portugal. First we went to a little town called Olmedo and then to a tiny village called Villafáfila, site of an important nature reserve for wading birds. We observed some interesting birds on the lakes and then continued onwards to Puebla de Sanabria, a spectacular town with a mighty castle on a hill. Exploring the old town at night was strange, as we had the entire place to ourselves. Courtesy of an arc lamp, we made giant shadows on the sides of the castle -- rabbits, serpents, plesiosaurs, Hindu gods, priapic satyrs, all the usual things -- before descending for supper.
The following day we went north to the Lago de Sanabria for a hike in the mountains. We followed a long circular route high into the Sierra de la Cabrera. The scenery was amazing. This hike took all day and by the time we finished we were shattered. We decided to save Portugal for Sunday... When Sunday came we drove due south from Sanabria to Rihonor de Castilla, the Spanish half of a unique village that straddles the border. We walked across a vegetable garden and crossed into Portugal somewhere in the middle of a pumpkin plot. The Portuguese side is called Rio de Onor. On the road the border is abrupt, changing from smooth Spanish tarmac to Portuguese cobbles. The small geographical difference belies the larger cultural difference. "Gracias" becomes "obrigado" and the beer changes from Mahou to Sagres. Also the clock on the church on the Portuguese side is one hour behind the church on the Spanish side. We climbed both churches and bonged the bells, rather naughtily.
The road from Rio de Onor to Braganca passes through the Parque Natural de Montesinho, a beautiful forested region. I saw a stag among the trees. He saw me too. We visited the castle in Braganca, ran along the walls of the old city, climbed up to the roof, admired the muskets and swords in the museum and then gatecrashed a party for a British Vintage Car club. Once again there was free food and beer! I ate seven pasteis de nata one after the other... I taught Rosa to say "absolutely!" whenever anyone addressed her in English. We weren't rumbled. Then we went to Zamora, another interesting city, before returning to Madrid. Today I am tired.
# posted by Rhys Hughes @ 1:25 PM 1 Comments 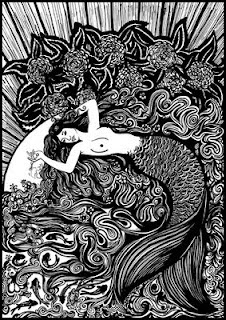 Fiestas and more fiestas! Does this country ever take a break from celebrations? I don't think so... On Saturday I went to a village called Buitrago where a medieval fayre was taking place. Men on horses jousted with cardboard lances. It was like a scene from Tirant lo Blanc but without real violence. Buitrago is a pleasant historical little place...

There was another fiesta in the city of Getafe on Sunday: more people dressed in medieval costume but also fire jugglers and Cuban music. And performance art. A man drew pictures in chalk dust with a vacuum cleaner while another man played avant-garde squeaky saxophone. Huh? I networked with the local Minister for Culture and have been invited to appear at a major conference of fantastic fiction next year.

October already! Lots of projects are coming together, so this should be a busy month for me. As a writer I have a big advantage in that I'm often at my inimitable best and I'm delighted the British Council have decided to accept this fact and support my trip to Lisbon. Courtesy of Livros de Areia the details of my trip are as follows: October 24: reading in a Chiado café; October 25: presentation at the British Council's HQ; October 26: presenting the book at FNAC Colombo. Further information here... I believe also that Pedro Marques will be in possession of the original drawings and paintings of my illustrator, Paulo Barros, one of the best mermaid artists ever!