I've just finished my 490th story. As well as being about coulrophobia it's also an attempt to work out the ramifications of the Genie Paradox (wishing for more wishes, wishing to be omnipotent, wishing to be a genie, etc). It's not my first attempt at dealing with this paradox (see 'Niddala' in The Less Lonely Planet) but it's my most comprehensive so far. I've always been fascinated by the idea of asking a genie to grant a logically impossible wish. According to the old stories you are allowed to wish for anything, so what happens if you wish for N≠N or for the square root of minus one to be a normal integer?

Having got that out of the way, I'm now working on my 491st story, a spoof of Hemingway called 'The Sun Trap'. Hemingway is one of my least favourite writers. When I was 18 I decided to read some 'proper' mainstream literature instead of science fiction and fantasy, just to see what the fuss was about. I chose Steinbeck, Dos Passos and Hemingway. The first two matched my hopes but I felt badly let down by Hemingway, by his style, opinions and smugness, and I've been refining a savage parody in my head ever since. I don't know why I've waited so long to set it down in written words...

So only 10 more stories to the magic 500 mark -- the exact midpoint of my writing career! 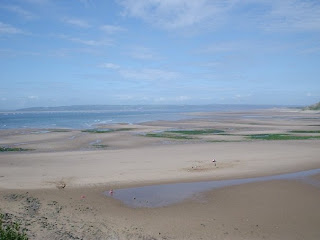 My fitness has started to improve recently. I led such an indolent lifestyle over the winter that I became a veritable pomme-de-terre de chaise-longue (a more cultured version of the couch potato) and that appalling indolence coupled with an intense six weeks of sitting immobile while writing my Twisthorn Bellow novel meant I actually began to feel permanently weak, run down, unmanly. I even went to the doctor to learn if I had an illness. I didn't, I was just unfit. So I've got back into hiking, cycling and running. The running is the difficult part. I've worked my way back up to a comfortable 3K and my aim is to take part in next month's charity 5K along the Swansea seafront. Those distances might sound pathetically short to you, but for me they feel formidable. Mind you, the buzz that comes from running is better than cocaine, in my quasi-self-righteous view... 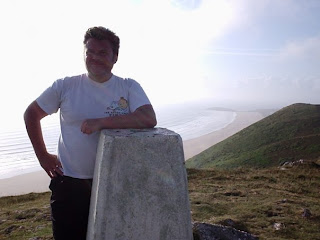 As for hiking, these photos show my most recent jaunt to the Gower with Adele. I did promise I would take my camera along next time, so I did...

Talking about pommes-de-terre and other French things, about six years ago I put together a collection for a French publisher that was duly translated into that gorgeous language. Whether it was actually published or not, I can't say for sure. I think not. Generally I don't remember which stories I included in that book, but I know that 'The Jam of Hypnos' was in there because that was the title story. If the book was published I imagine the collection as a whole was called something like La Confiture de Dormir... 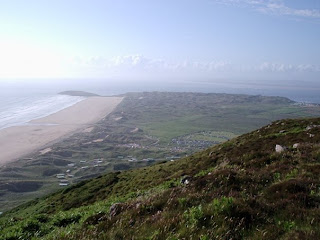 Anyway, I have just put together a completely new collection in English called The Jam of Hypnos and submitted it to a publisher. If it's accepted, it will be my most serious and sober collection to date, as I mostly shunned parody, pastiche, wordplay, metafictional tricks and absurdist comedy when choosing which pieces to include. Some irony will be in there, of course, as I can hardly keep it out of anything I write, but it certainly won't be the central focus of any of the stories. The Jam of Hypnos is intended to be my (perhaps unwanted) gift to those readers who prefer more traditionalist supernatural fiction, not exactly a book of orthodox ghost tales but headed that way... 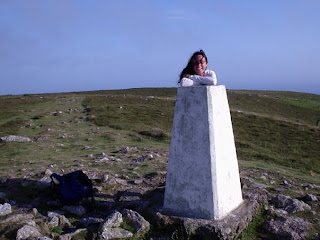 I'm writing furiously at the moment, my head bursting with ideas, the words flowing almost too smoothly from my overheated mind onto the page and I seem to be fuelled to herculean efforts by the awareness that I'm rapidly approaching the 500 story mark... In terms of wordage I'm on course to beat my yearly record of 167,580 words of fiction (achieved in the year 2000) 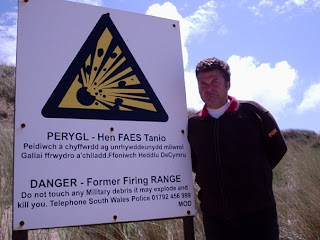 Yesterday I completed a new Castor Jenkins exploit called 'Home Suit Home' which was my 489th story, and I'm already halfway through my 490th, a piece about coulrophobia called 'Poorly Dawkins', and I'm simultaneously working on linked stories for a future collection entitled Implausible Planets that was originally intended to be a parallel of Calvino's Invisible Cities (with planets instead of cities) but now is just a set of short cosmicomic adventures, because I realised Calvino's book was its own parallel (as well as being profoundly itself). He was clever that way...

As we're on the subject of Calvino, why do so many of my favourite things end with the shamelessly circular letter 'o' ?
It's a mystery...

The wild camping season has arrived again. Sleeping under the stars quickly becomes an addiction. Last week Adele and I went walking on the Gower and ended up sleeping on the cliffs above Mewslade Bay, near a stone structure that we decided was a neolithic temple but which actually turned out to be a lime kiln from the 17th century. So our educated guess was only out by about 8500 years! Not bad... The night was full of rabbits on crags silhouetted against the moon. We also learned what an excellent fuel gorse wood makes: it catches fire very quickly and burns for a long time. Much better than driftwood.

Mewslade turned out to be a great place to swim, but also a slightly bewildering one, as there's a sandbank not far offshore. The further out into the sea you swim, the shallower the sea becomes! Lots of interesting caves in the cliffs along this part of the coast that seem worth exploring. Hopefully we're going back to the Gower tomorrow and this time I'll make sure I take my camera along. Depends on the weather, of course, as the brief 'heatwave' seems over already... 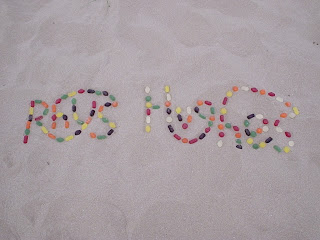 As I kept the winegums I used to create the cover for Mister Gum, it seemed mean not to give them another outing; and as I changed my official 'book signature' a few months ago, it seemed churlish not to write my name in winegums on the beach. So that's what I did. This signature has replaced my old signature (the one with the dragons' tails). So far just a few copies of Engelbrecht Again! have been graced with this new signature, but all future books will also be signed this way, making the dating of signed copies of my works easier. If it was signed prior to 2009 it'll be the dragons' tails; if 2009 or later then the swirly version... Changing one's signature mid-career can't be considered bad form because Philip José Farmer did it and he always set noble precedents...

In terms of total number of stories written, I really am close to being exactly 'mid-career'. I've just completed my 486th story and I might even get to the 500 mark before the end of this year. My latest tale, 'The Underwear Shop', is one of the weirdest I've done. Superficially about robots who wear lingerie, it was written for a forthcoming Futurist anthology and I used a new working method: seeding the plot with unconnected ideas taken randomly from my notebooks and forcing them to work together (and amplify each other) by writing appropriate linking passages. What might have been a list of non-sequiturs actually turned into something coherently stranger than anything I could have deliberately planned.

I'm desperate to get into that Futurist anthology! I've already submitted more than a discreet handful of stories to its editor. Futurism is so gloriously, ironically retro... People who compare the BNP with the Fascists seem to forget that among the Fascists were some talented writers and artists, the Futurists foremost among them; whereas the BNP are a bunch of uncultured ooze-fools. Could any BNP supporter ever produce something as sublime as this Dottori painting? I doubt it.