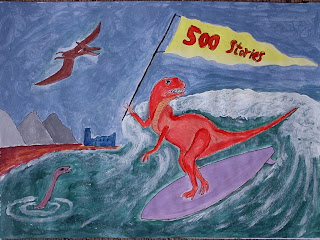 I've done it. At last. 500 stories. It has taken twenty years to get this far; and now I'm exactly halfway through my intended life's work. A list of all five hundred can be found here. These are all my surviving stories -- I wrote many before 1989 but those have been lost. So I count 'Raindancing' as my first story. Since then I have written 1,982,247 words of fiction, which means that the average length of a Rhys Hughes story is 3,965 words. But I doubt I have even a single story precisely that length.

Of course that wordage doesn't include the words in all the partly completed tales that haven't yet been added to the list. In fact, checking my list of stories-not-yet-finished I see that there are 180 of those; and some of them are fairly well advanced. But essentially I want my second set of 500 stories to be different from the first set. I might have to write a manifesto of some kind to give me direction. There are certain things I want to change about my writing. I need to learn how to develop in certain areas where I'm lacking. My characterisation is pretty poor. That's one area where I can make improvements. There are many others...

And yet, I truly believe that I've done something remarkable for a Welsh writer. Without meaning to tarnish my own trumpet by blowing it too hard, I can't honestly think of any other Welsh writer who has engaged himself on a project of such complexity, intricacy and grandiosity (I don't regard 'grandiose' as a dirty word). One thousand stories linked into a single gigantic organism, each story separate from the others and yet forming a vital component of the whole... I decided to celebrate reaching the halfway stage of this project with another painting. I still can't paint. But here it is anyway. It's bigger than this, but it wouldn't all fit on the scanner. Surfing dinosaurs are like that. 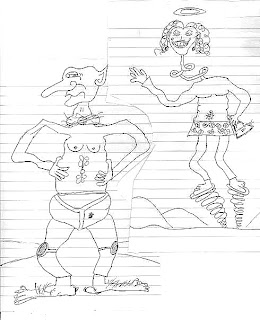 I'm not trying to sell anything this week. Next week I'll probably plug my Plutonian Parodies chapbook, but right now I'll desist from encouraging you to spend money on the productions of my brain. Are you grateful for the reprieve? Bet you're not... Adele and I have lately been entertaining ourselves with the old Surrealist game called 'exquisite corpse'. The rules are simple. Here they are, if you're interested. The method works for prose, poems and drawings. This pair of grotesque characters are typical samples of what can result from the game. Although utterly unrealistic, they somehow capture an essential truth about Swansea and its nocturnal inhabitants. 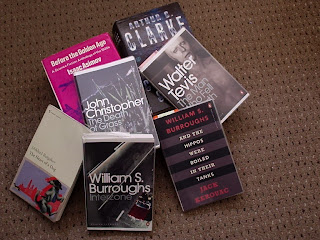 I am still working on my 500th story, but it's in the final phase at last! I'm very pleased because it's turning out to be exactly the sort of thing I enjoy writing (and reading) most: a seamless blend of the serious and absurd, the eccentric and profound, the extravagant and mannered, the relentlessly logical and the unpredictable... I think it might end up being one of my best short stories, perhaps the best. Mind you it's more of a novelette than a short story. 22,000 words so far, and rising... What else? Oh yes, I'm slowly reducing the number of books I'm reading simultaneously. I've added some new titles since the last photo I took of all my current reading material herded together, but the numbers are coming down. One day I'll be back to reading one book at a time! 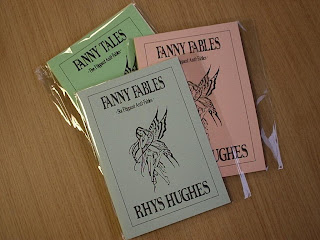 Yes, another new chapbook. I wrote the first Fanny story back in 2007 as a one-off while I was living in Madrid. The idea for a sequel didn't come until the following year. I wrote that. Then I wrote a sequel to the sequel. And a sequel to the sequel to the sequel. And a sequel to that. So I eventually ended up with five interconnected stories. Neil Jackson of The Penny Dreadful Company accepted them for publication; but after they were typeset, proofread and the review copies were printed, I had an idea for a sixth Fanny story. Oh dear! But Neil was gracious enough to allow me to write it and insert it into the sequence. This chapbook features all six -- 'Fanny is Famished', 'The Furry Godmother', 'Petal Put the Kelly On', 'Fanny of the Apes', 'Knobheads and Dipsticks' and 'Fanny of the Opera'.

The Fanny stories utilise a technique I'm fond of, namely taking something that is already absurd but not perceived as such (in this case the moral fable) and applying merciless logic to it until it turns inside-out or crumbles away. It's just a form of deconstructionism, I suppose. I enjoy doing this. I've deconstructed vampires, zombies, invisible men, ghosts and many other illogical memes in my time -- with absolutely no general effect whatsoever. They still persist. Ah well! The Fanny Fables can be ordered here. Just don't tell Neil Jackson that I've recently had another idea for a seventh Fanny fable (called 'Pussy in Boots') set in Boots the Chemist and starring Diana the Rig... 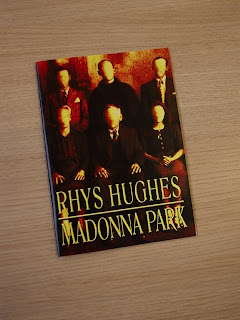 The first time I heard the word 'chapbook' I assumed it was a book for chaps, in other words full of pictures of naked women. I soon learned it wasn't. I think the writer D.F. Lewis introduced me to the word: he was always bandying it about. The first time I heard the word 'bandy' I assumed it was a French alcoholic drink. No I didn't. Anyway, the apparent truth of the matter is that chapbooks were originally sold by chapmen and that's how they earned their name. Does that help? I know it doesn't really. A chapbook is a pamphlet containing poems, ballads, stories or religious tracts. Fast to produce, cheap to buy, easy to digest, they have been a mainstay of writers for hundreds of years. The great Thomas Nashe was almost exclusively a chapbook writer.

Until yesterday I had three chapbooks to my own credit, Romance with Capsicum (1995), In Praise of Ridicule (2003) and The Skeleton of Contention (2004). Now I have a fourth, Madonna Park. This new chapbook has a colour cover and comes courtesy of The Penny Dreadful Company and can be ordered here. The owner of the aforementioned company is the extremely hard working and approachable Neil Jackson. Thanks to his encouragement I have created two other chapbooks and I'm working on yet another. I will announce details of all these soon... Madonna Park contains six brief tales from various stages of my career. These stories are: 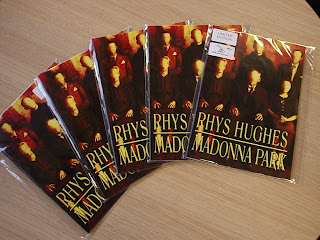 (1) Big Game (1990) -- one of my earliest surviving stories and one of my first published (in a small press magazine with the charming name Dementia 13). I wrote this so long ago I almost feel it comes from another world...
(2) Three Friends (1993) -- a ghost story, part of my Taller Stories sequence (and thus maybe a future part of my Tallest Stories epic) and also the only story of mine to be turned into a play in Finland...
(3) The Big Lick (1994) -- a sort of Sladekian SF story, but not quite. I can't actually remember if this has ever been published in a magazine or not...
(4) Madonna Park (1995) -- I believe this story contains one of my most shocking ideas, though whether it truly is shocking is not for me to decide, but for potential shockees...
(5) Suttee and Sweep (2007) -- an unpublished story about a puppets' graveyard...
(6) The Gun Fight (2009) -- my 501st story, completed before my 500th story and therefore not yet an official part of my canon...
Madonna Park is a limited edition chapbook and when all 250 are sold they are gone forever...
# posted by Rhys Hughes @ 10:35 AM 0 Comments