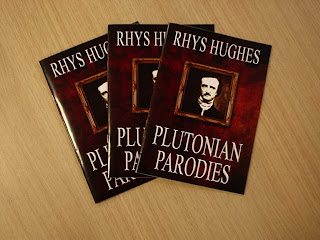 My latest chapbook, Plutonian Parodies, has just been published by the Penny Dreadful Company. Things are being restructured over there, so the situation is now as follows: it seems I will eventually have a total of five chapbooks available from them and all will have colour covers. There will be no more non-colour chapbooks. So in order of publication, the full list of my expected chapbooks is as follows: Madonna Park, Plutonian Parodies, The Fanny Fables, To Err is Divine and Flash in the Pantheon. A non-colour version of Fanny Fables has already been issued. That chapbook will now be discontinued. I am currently writing two new Fanny tales for the updated edition. Anyone who bought the six-story non-colour copy should feel free to email me and I'll do something to make sure they don't miss out. My email address can be found on my blog profile. 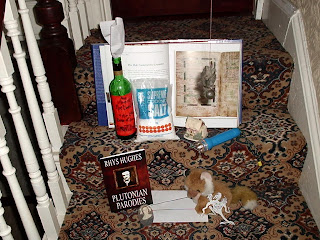 To help promote Plutonian Parodies, I thought it might be nice to run a small competition. So that's what I'm going to do. The winner will receive all five colour chapbooks, a copy of the six-story Fanny and an ultra rare copy of the original five-story Fanny, plus an actual handwritten manuscript of one of my stories (I occasionally write longhand). If I ever become as famous as I believe I deserve to be, then this handwritten mansucript will eventually be worth loads. If I don't become that famous, you can always use it to wipe your arse. Now then! Here's the competition! Behold a photo containing numerous references to the stories of Edgar Allan Poe. There are thirteen references in total and if anyone gets all thirteen, I'll be amazed! Please email me your answers. Anyone who tries to guess more than thirteen will be disqualified. I want to say "Good Luck!" but I can't say that to everyone: it would confuse fate and/or chance. 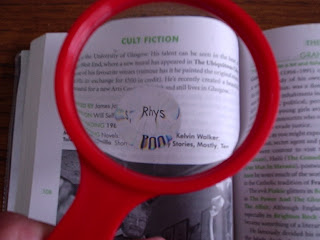 Writing... I still haven't broken the 2,000,000 word barrier, but I'm very close. I have just written a tale about the workman who repairs the Yellow Brick Road and I have somehow tricked Nebula Award winning writer Michael Bishop into contributing to the story. I am just waiting for his segment to be completed; then I'll be over the two million mark! What else? I've been invited to Romania for a book signing. I accepted at once, of course! This should hopefully happen next year. I might make a meal of it and travel first to Istanbul so I can cross European Turkey and Bulgaria before reaching Bucharest. After that I can wander down into Serbia, Macedonia, Albania and Greece maybe, visiting literary and/or creative types on the way! What else? As I mentioned in my last post I was pleased to note a reference to myself in the Rough Guide to Cult Fiction as a writer influenced by the genius Alasdair Gray. Here's a photo I took to prove it to myself. The print is small, hence the magnifying glass. 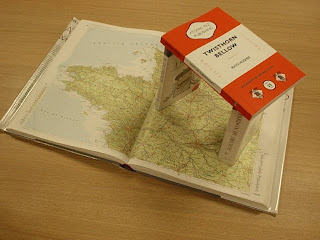 The ARC (Advance Reading Copy) of Twisthorn Bellow arrived a few days ago. It looks as great as a faux-Penguin should. Actually, this isn't the cover it will have when it goes on sale, but I decided to take some photos of it anyway. As the apocalyptic ending of the novel takes place in France, I thought my photos should be French-themed, hence the Arc de Triomphe and the Eiffel Tower. In fact, the Eiffel Tower is the narrator of the last part of the book and so here we see him taking a well-deserved break as a desktop item. Publication date of Twisthorn Bellow is 25 March 2010, so wind up your calendars right now! 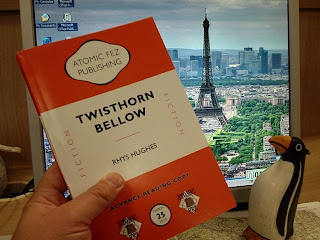 Over the past few weeks I have been hard at working polishing off my Tallest Stories book. I have now emailed the entire thing to a publisher and completed an afterword which may be added to the text. I am delighted with this project. Another project I am immensely pleased with is a forthcoming collection from Ex Occidente, a publisher based in Romania. Since September I have been sending stories to Dan Ghetu, owner of the press, and he seems to like most of some of many of them. My collection will be called The Impossible Inferno after the longest and most ambitious story it contains. Adevarat ca a inviat!

Word of the Day

I went to London on Friday. My first visit for more than a year. I was surprised to see pelicans in St James's Park, but apparently they have been there since at least 1665, presumably not the same ones. I went to the Tate Modern, as I always do when I'm in London, where I watched an interesting experimental film, Meshes of the Afternoon, made in 1943 by Maya Deren. A sort of proto-David Lynch short, it also reminded me of Bioy Casares' short novel The Invention of Morel. Good bewildering stuff.

In London I was interviewed by the Wordia project in aid of Remembrance Week. I stood in front of the Australian War Memorial at Hyde Park Corner and tried to define the word "honour" with my awkward mouth. In other words I am 'Word of the Day' just for today (10th November). The video below should speak for itself. This project is sponsored by The Independent, a British newspaper I have a particular fondness for because it was the place where my very first publication was printed -- a chess problem (white to move and mate in two) back in 1988.


Back to Swansea and back to writing... I have recently broken my record for words of fiction produced in one year. So far, my total wordcount for 2009 stands at 180,780 words. My previous record was in the year 2000 when I produced 167,877 words. Will I get to 200,000 words before the end of this year? It's possible, but I'm not banking on it. More importantly, I'm only 2988 words short of reaching the magic two million! I passed the one million mark during the writing of a story called 'The Crab' in 2001 (subsequently published in Stories From a Lost Anthology in 2002).

So much for statistics that are only interesting to me... Now I need to talk about my chapbooks. Neil Jackson of The Penny Dreadful Company has decided to give every chapbook he publishes a colour cover, hence the delay with the release of Plutonian Parodies. This also means that The Fanny Fables will be reissued with a colour cover; and because I've had ideas for new two Fanny tales, the new colour Fanny will contain eight fables, not six. Anyone who bought the non-colour six tale chapbook will receive a free copy of the updated version. Just email me and let me know...

Other writing news. I am very close to finishing one of my grandest projects to date. I began the Tallest Stories cycle back in 1994 and actually thought I had completed it in 2006. But I was deceived. It wasn't quite right. Now I have finally got round to examining it, cutting out the bits that didn't work and replacing them with better bits, and fixing the whole intricate machine. I finished the last part yesterday. I just need to write an afterword and proof the entire book and then it can go to a publisher. I have a publisher in mind. The publisher I have in mind seems interested. Tallest Stories is a sort of microcosm of my ultimate Grand Wheel of stories. Sixty linked tales and three broad, nested framing devices, with the tales frequently turning into framing devices of their own, and vice versa. Complex.