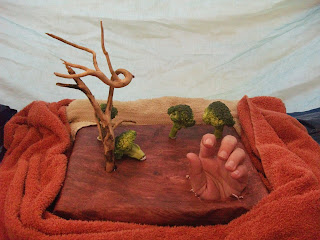 Here we see a mysterious forest, an unusual expanse of mixed woodland. The broccoli trees are in full bloom; there's an old driftwood tree in the foreground; and on the right-hand side of the picture stands a rare handtree... It seems to be a left-hand tree. Counting the rings of handtrees isn't a very good way of estimating their age; not all of them wear rings. But judging by the height and span of this one it would be reasonable to suppose it is about 43 years old. Keen-eyed readers may notice that one of the broccoli trees has been blown over in a Sunday Dinner Gust; luckily no one was sleeping beneath it at the time! 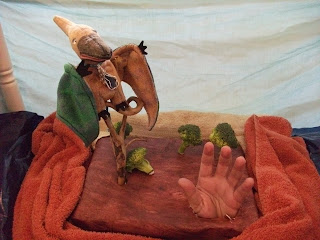 What's this? A pterodactyl enters the scene. Not just any old pterodactyl but Ptula Graaark, who has appeared in several of my stories already. Ptula wants to rest for a few moments and chooses the driftwood tree as a convenient and relaxing perch. Incidentally, why do we all assume that pterodactyls made a croaking noise instead of going "Cheep! Cheep!" or "How do you do?" There's no evidence for it... Please note that Ptula is modelling a blue sea-glass pendant made by Adele. Check out her Tiddu website for more samples of excellent crystal and sea-gem jewellery! Blue is one of the rarer sea-glass colours! 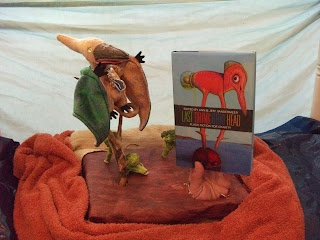 I have two pieces of great news. The first is that I have already finished writing The Abnormalities of Stringent Strange. Although 57,000 words is rather short for a novel, the story doesn't need to be any longer than that; I guess I can refer to TAoSS as a 'short novel'. When I began work on it last month I only intended to write a novella anyway! My book is a comedy stew of many themes and situations found in the SF pulp magazines of the 1920s, 30s and 40s, and I tried to make it as weird, goofy and unpredictable as possible. For some reason it also contains many references to the Canadian prog-rock combo Rush, who were among the favourite bands of my youth! 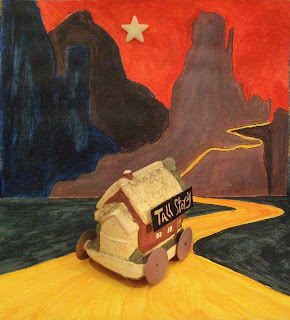 My other piece of great news is the acceptance of my Tallest Stories book. That's the one I worked on for 15 or 16 years. I don't mean that I worked on it solidly for all that time; but that was the time period that had to elapse before it came together properly. The book is a collection of linked tales. The linkages are very intricate; a minor character in one tale may be the narrator of the next, and so on, until the circle (or Möbius strip) is closed. There is one over-arching framing device that contains three smaller framing devices and these smaller frames contain stories that sometimes frame other stories or even other framing devices!

There's a lot of fluid motion in Tallest Stories but there are several constant factors too. The main one is the pub where the tales are told: the Tall Story. Unlike most normal pubs, the Tall Story is capable of external (as well as internal) movement. It can tour the universe easily enough; and indeed at one point it becomes the universe. This photo shows it rolling across a desert landscape at night on special wheels. Unseen inside is a full crew of regular patrons, including Napoleon Bonaparte, the main narrator of the book (who ended up here after escaping from Saint Helena -- a hitherto unknown chapter of his life!) 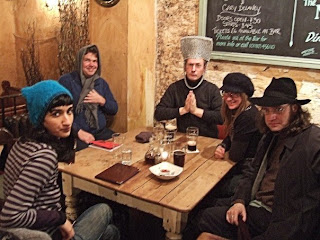 Originally I intended to call this blog entry 'Ready Salted Quentin' even though I knew the paucity of the joke was unworthy of the fellow who is seated at the far right (spatially, not politically) of this photograph. Quentin S. Crisp is his name and he's a writer overloaded with talent. I'll refrain from mentioning his crisp prose style and talk instead about his vast but tightly controlled imagination, his fierce intelligence and exceptional erudition, his visionary blend of the mystical and existential, his commitment to integrity and depth: there are no superficialities anywhere in his oeuvre. His latest book is available from Ex Occidente right now. Here we see him in a pub in Swansea in a tableau with the theme of 'hats' (some improvised) together with my friends Hannah, Thomas, me and Sarita. Perhaps I shouldn't include myself in a list of my own friends. Too late!

I am always wary about meeting writers. I can't bear to listen to them talking about themselves or their work. I was once plagued by a scribbler who used to phone me to tell me the plots of his latest stories. I can't stand that. I never want to be told plots. Finish writing the story that contains the plot first; and then, if the story is published in a book that becomes a Penguin Modern Classic, and the back cover of that book features positive (and impossible) blurbs by Calvino, Borges, Lem, I might read it and learn what the fuss is about. Otherwise: bugger off! I don't blabber about myself or my writing when I'm out and about, and I don't see why I should be forced to endure it from others. 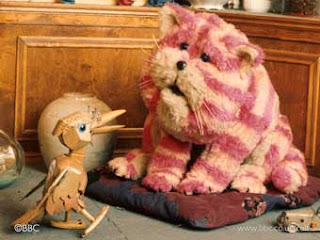 Quentin, to my delight, voluntarily spoke about himself and his writing not once. He was extremely modest and impeccably dignified. Some people might regard this as a lack of drive, but I wonder if actually it's a sign of inner strength, the absence of a need for constant reassurance? Whatever the case, the last word on Quentin belongs to Ray Russell of Tartarus Press: "He possesses a charm that might well be envied by Bagpuss, and indeed he shares with that fat furry catpuss a syncretic ability to fuse disparate elements that may be intensely contradictory into a satisfying but also profoundly unsettling whole."

Ray Russell didn't really write that, but as Marcel Schwob once said, false attributions are fun: try them sometime! No, he didn't. Meanwhile, I ought to report that work on The Abnormalities of Stringent Strange is progressing well, extremely well in fact, and I have already completed 50,000 words of what will probably turn out to be a 65,000 word 'short' novel. The story is a sort of companion to Twisthorn Bellow although the characters, situations and timeframe are all different. I hope it will be finished within a fortnight, or three weeks at the most, depending on how much free time I get. If I gave up reading, my writing output would certainly increase still further; but how does one give up reading?

Which reminds me: How many times higher than a high tower is a very high tower? Just one of the many questions posed in the best collection of short stories I've read for many years...