We have been blessed at last with an Indian summer! I often complain about the Welsh weather. It's entirely proper to do this; and yet I'm perfectly willing to acknowledge those rare times when the weather in Wales is just fine. No one can fairly say that I ever exaggerate on this particular topic. The last Indian Summer in Wales was 254,576 years ago, approximately. 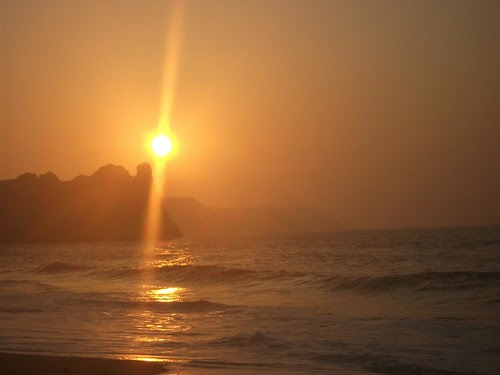 For most of my life I assumed that the 'Indian' part of the phrase Indian Summer referred to India, the country; but in fact it's an allusion to Native Americans. I don't know if that alters the phenomenon in any way. Almost certainly it doesn't. Whatever the etymology, we made the most of this opportunity to go on an expedition to the Gower and bivouac on the beach at Oxwich. It was a spring tide and the waves were enormous. Swimming at sunrise is a pleasure I recommend: a seal poked his head out of the water and looked at me in amazement as if to say, "Bit early for this lark, isn't it?"

At the end of this trip I retired my hiking boots after 15 years service, which included treks through Sardinia, Morocco, Greece, Poland, Spain, Portugal and Albania. I left them on the edge of a cliff overlooking the sea and within five minutes a spider had started to spin a web inside one of them; so I'm confident they will have a happy retirement!


Well, for what it's worth, it's ready... As I said in my last blog entry, the Tellmenow Isitsöornot was originally a nonexistent book of tall stories that Edgar Allan Poe invented as a joke in one of his tales.

I find it very revealing that Poe could create a spoof title like that back in the 1840s, whereas the nonexistent books invented by weird writers a century later (Lovecraft, Clark Ashton Smith, Robert E. Howard) had much grimmer titles such as Necronomicon, Book of Eibon and Unaussprechlichen Kulten... I have often toyed with the notion that in the literature of the imagination, the absurd predates the serious.

My own version of the Tellmenow Isitsöornot features exactly one hundred of my own stories, a selection that is not only tall but broad, featuring a large cast of odd characters in peculiar situations. Many of these stories have never been published before or were published in very obscure small-press magazines with tiny print runs back in the 1990s. Ghosts, werewolves, talking brass heads, captured moons, mechanical men, alchemy, magic and transformation, all these and more rub shoulders in a minor Decameron of devilish delight!

It's available right now for download from Smashwords here for $4.99 (just under 5 cents per story)... And the first 6 and a half stories are available as a free sample, if you'd like to check them out first... Thanks for listening! 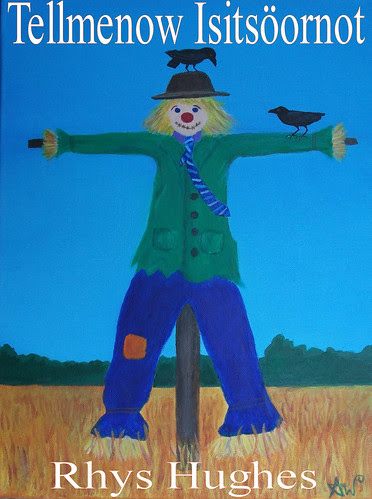 I'm in the middle of putting together my own ebook. It'll feature exactly 100 stories...

I'm a rubbish designer and don't know much about formatting ebooks, so I'm learning as I go along... Here's the first mock-cover. My design skills might be highly unprofessional but I hope it's a cheery and whimsical image nonetheless...

The reason I am creating my own ebook is to repair some of the damage done by Neil Jackson of Ghostwriter Publications. The easiest way for me to explain who this fellow is (and what he has done) is to link to this fable I wrote about him...

I'll add that he issued my first ebook, Better the Devil, a collection of 76 stories, more than a year ago, with the promise that I would receive more than half the profits generated. I was naive enough to believe him. Needless to say, I haven't received a single penny and he has pocketed all the cash... I'm not the only author he has treated in this manner. The word "conman" is perhaps not too strong...

I therefore have to take the unusual step of requesting my readers not to purchase one of my own books! Please boycott Better the Devil and consider buying instead The Tellmenow Isitsöornot, which 'cancels out' the earlier ebook by offering more stories at a lower cost...

Tellmenow Isitsöornot isn't such a tongue-twister as it might seem. In fact it's one of Edgar Allan Poe's jokes (he made a lot more jokes than he's usually credited with). “Tell me now, is it so or not?” is the way to say it. I imagine it should be spoken with an Irish accent if possible.

As soon as this ebook is ready, I'll post information about it here. Thanks!

Arch of the Penguins 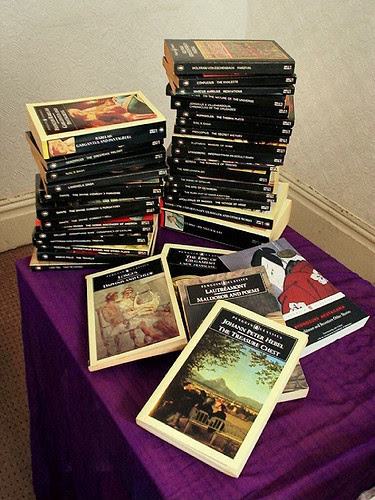 Well, it's not really an arch; it's a pillar, two pillars in fact, two collapsed pillars if you want to be pedantic; but 'Two Collapsed Pillars of the Penguins' has no pun value...

I have sometimes been criticised for not reading contemporary writers. Although this accusation is technically false (some of my favourite writers are still alive: Moorcock, Aldiss, Vance, Barth, Pynchon) it is true in essence. What my critics mean is that I don't read contemporary small press writers. And I don't, much. That's because they tend not to be very good. There's no malignity in that statement. It's just a fact. Back in the 1990s it was fashionable in certain circles to claim that the brightest and finest new writing could be found in the small press, that small press writing was a powerful antidote to the blandness of mainstream (i.e. published by proper publishing houses) fiction. But the simple truth is that every small press writer I ever met back then was itching to get out of the small press and into the big world of the proper publishing houses.

In my lifetime, only a very few made it. A handful. That's because the small press was not a ladder leading up to better things. There were no rungs upwards at all from that starting point. The handful who successfully progressed did so by jumping. Three who landed safely on much higher ledges thanks to the immense power of their leaps were Neal Asher, Tim Lebbon and Jeff VanderMeer.

The scene has changed since then. Electronic publishing, market forces, the currents of history... Whatever factors have come into play, the dividing line between the small press and the big boys, once an almost impassable border, has cracked and/or blurred in places; in some senses it can be said there is no longer a small press and a big press, there is only a medium press. The process hasn't reached that stage yet, but it does seem to be headed that way. And yet one fact hasn't altered at all: 99% of new writers aren't especially good. And that's why I don't read them. I don't have the time or energy. Maybe I am being overcautious sticking to established names (even though some of those 'names' seem to be obscure to British readers) but I'm essentially a lazy man.

It is not so much the small press itself (as a springboard, real or illusory, for aspiring writers) that I am attacking, but the credo that the best writers can be found there, that it's the home of the finest cutting-edge writing. This credo reached its zenith in the editorial line of such 1990s magazines as The Third Alternative, edited by Andy Cox, in which there was an attempt to redefine the small press as a worthwhile destination in itself, indeed as the ultimate destination, rather than as a way station on a road to somewhere better (even if that road turned out to be blocked by a landslide further along). There was too much insistence that small press writers were the best any reader could ever hope to encounter and it was a view I just couldn't share in good faith. Even while writing for the small press, I only read writers published by the major houses.

But even this isn't quite accurate: I have read small press writers and some of them (D.F. Lewis, for instance) are good and deserve to be better known. Yet as a rule of thumb, the best writers who have ever lived are published by the majors... Penguin has been my favourite publishing company ever since I began reading books seriously. When I was a teenager I collected Penguin Classics by the dozen and arranged them in chronological order on my shelves. But I only managed to read a few of them. Since then I have carted them around with me, persuaded friends to look after them on my behalf for years, retrieved them, lost them, found them again.

I still have about half of what I originally owned and this photo shows half of those. But the point is that I've started reading them properly at long last! And they are brilliant. And in fact I am led by them to conclude, paradoxically, that most of the finest cutting-edge writing was done long long ago. And I urge any fledgling writer out there to read such classics rather than small press contemporaries. You really will learn much more.