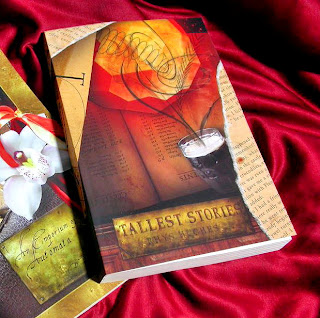 Good news. Tallest Stories is now available as a paperback. The hardback is selling quite well (much to my relief; I always worry about this) but any reader who wants a cheaper version can now obtain the paperback from various outlets. David Rix of Eibonvale Press, the publisher, has pointed out that it's better for everyone if readers order directly from him. Cuts out the middleman...

To order the paperback directly from the publisher, click on the relevant Eibonvale webpage and use the 'select binding' button to specify a paperback. The price of the paperback is £9.50.


As an addendum to the previous post, here is another one of my songs. This one is called 'Very Tall Hats' and took me a lot longer to put together than the other two. Click on the link to hear it:

I only learned recently that the very tall hat beloved of ancient damsels is called a 'hennin'. So now you know too, if you didn't know before...

Going for a Song 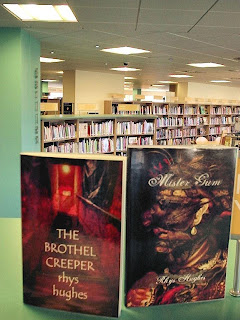 Swansea Central Library has acquired two more of my books, this time without prompting... Out of a choice of 23 books they have picked the two darkest and most perverse ones: the only books I have written with excessive sexual content... Nice choice, O librarians! This is certainly going to give the reading public of my hometown a good twisted idea of what I do...

But anyway, I recommend to any writer that they order their own books from their local libraries. My personal experience has shown that this works. Being read by readers is the whole point of being a writer!

Let's see if I can get more of my books into more libraries. I especially owe this to Chomu Press, who deserve to be more widely known than they are...

Now then... for many many years I have wanted to dabble in music. I don't think I'll ever be any good at music; but that's not the point. For me it's just a way of relaxing, experimenting and having fun. When I write, I have the responsibility to try my best but when I mess round with other artforms I don't. The responsibility to be talented simply doesn't exist. So it's enjoyable for its own sake.

Anyway, since the beginning of 2013 I have been playing with an audio program on my computer and I have decided to attempt the composition of exactly 1000 "songs". Not songs in the normal sense of the word but Dada/Absurdist pieces of improvised and/or chance music. I have composed eight so far and am currently working on several others. Two have gone up on YouTube, one last week and the other just now... If you care to give them a listen, here they are (best listened to through headphones, but that's not saying much)...

There will be more, many more, in due course...


The first film I've ever made for YouTube was uploaded yesterday. It's me reading one of my stories, so now you can not only hear my voice but laugh at me doing a really bad Scottish accent, plus really bad English and Turkish accents; plus my attempt to talk like a woman...

You can also go directly to YouTube and listen to it there by clicking on this link. This film is a promo for my book Tallest Stories and you can expect two more story readings from this volume in the near future... 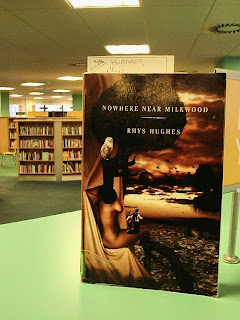 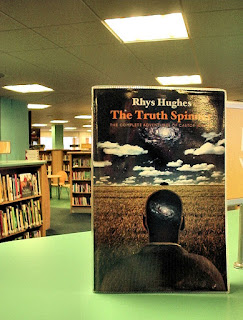 I did something desperate recently and ordered two of my own books from my local library. I picked the first one up a week ago and the second one yesterday.

Swansea Central is one of the largest lending libraries in the UK but it didn't have any of my books on its shelves. So I'm ordering as many as I can to get them into the system. In other words, they will be available come Hell or High Water; but you might have to ask for them...

The first two to turn up were Nowhere Near Milk Wood and The Truth Spinner. So if you live in Swansea and want to to read my fiction without having to pay for it, you now know where to go and what to do...


A fine fellow and Grand Knight of the Order of Whimsy by the name of Paulo Brito has used some sort of alchemy to turn no less than eleven of my ebooks into real chapbooks that don't require electricity in order to be read! Here they are, all together, on the same bed... 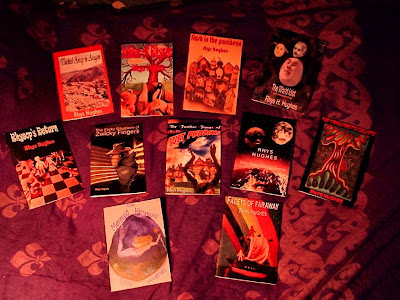 They are as follows: Tucked Away in Aragon (cover by me); Fables of Rhysop (covered designed by me in collusion with Adele Whittle); Flash in the Pantheon (cover by a bonafide weirdo); The World Idiot (cover by Kendal Obermeyer); Rhysop's Return (cover by me); The Sticky Situations of Zwicky Fingers (cover by Chris Harrendence); The Further Fangs of Suet Pudding (cover by Gonzalo Canedo); Young Tales of the Old Cosmos (cover also by Gonzalo); Ten Tributes to Calvino (cover by Brankica Bozinovska); The Mermaid Variations (cover by Adele Whittle); Facets of Faraway (cover arranged from various of Adele's artworks).

Paulo has agreed to make and sell these for anyone who is interested. He is currently working out prices, taking into account materials and postage; and when he gets back to me with this information I will blog about it here... Please note that I am going to try to sell two (or maybe three) of them to publishers and if I'm successful in this endeavour then they won't be available as chapbooks. Also note that The Tellmenow Isitsöornot is far too long to be turned into a chapbook; it's possible that Paulo might turn it into a hardback book instead, but whether it will be available in this form to the reading public is currently unknown...

My ebooks are all available as ebooks (rather than chapbooks) on Amazon or from Smashwords...