I have set up my own small press. Gloomy Seahorse Press has in fact been in existence since September 2011 but it has only published my ebooks until now, twelve of them in total. Now I plan to issue paperbacks too. The first title was More Than a Feline, which came out in December and is available to buy on Amazon and elsewhere.

The second book will be my one and only poetry collection. I have been planning this volume for a long time. Originally it was going to be called The Knight of Whatever and the cover was going to depict a lazy knight, but when I asked the artist Adele Whittle to design a logo for my company I liked the image she produced so much that I decided to use it as the cover instead, which necessitated changing the title of the book to The Gloomy Seahorse and writing a new poem to represent the cover.

This picture is the painting in question... The Gloomy Seahorse Press won't just be publishing my own work. In the future I hope to publish other authors. My dream would be to publish brilliant authors who have gone out of print or who haven't been translated into English, for instance W.E. Bowman,  Shinichi Hoshi and Jacques Sternberg. 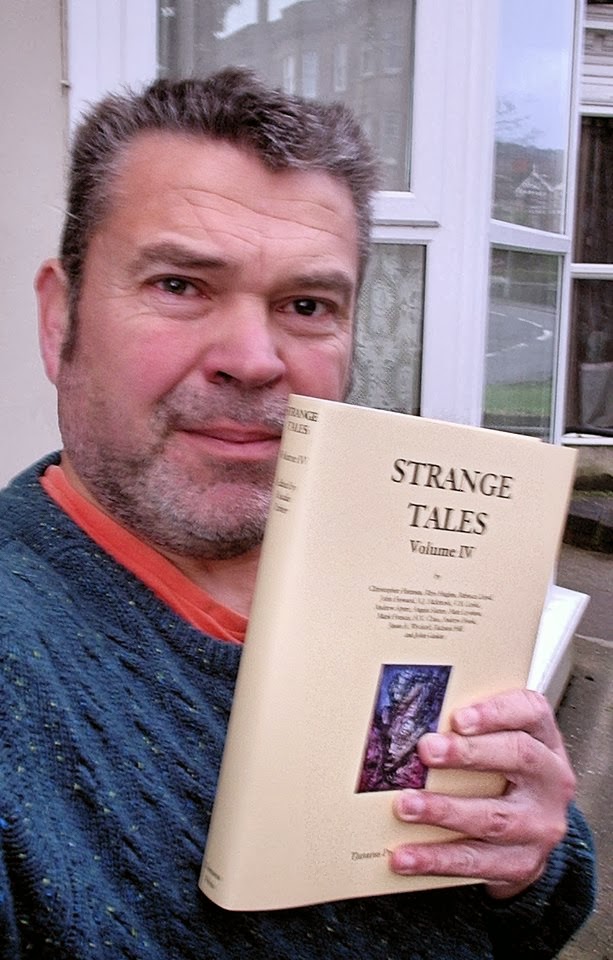 STRANGE TALES IV arrived for me yesterday. What a great looking book!

Tartarus Press really have cracked the presentation lark: it is impossible to mistake their books for those of any other publisher, but they don't stain for the effect of uniqueness; it seems a natural quality embedded in every aspect of their design process. It's a beautiful book, simple as that...

I am delighted and honoured to have a story included in this anthology and it's a story I am especially pleased with called 'The Secret Passage'. Re-reading it, I kept saying things to myself like, "Puppets! Mazes! Hypercubes! Ooh!" which gives an idea of what it's about without giving too much away...

Stories From a Lost Anthology is an Ebook


Tartarus Press were the publishers of my first book. Without them I might not be a writer now at all; and I certainly wouldn't be the kind of writer I am. It was Mark Samuels (author of The White Hands) who introduced me to Tartarus back in 1994, so I must extend my thanks to him also. I remember submitting a story entitled 'The Forest Chapel Bell' to an anthology called Tales From Tartarus and it was accepted and liked to a sufficient degree for the publisher to request more stories. From this beginning eventually came Worming the Harpy; and that volume led directly to The Smell of Telescopes; which in turn resulted in Stories From a Lost Anthology... and it could be that a fourth collection is on the cards.

In the meantime, my three existing collections have been turned into ebooks. The original hardbacks are often tricky to find and expensive too. So I am pleased that readers new to my work will now have the chance to read these collections. Worming the Harpy has been available as an ebook for two years; The Smell of Telescopes was made available in this form one month ago. And now comes the third volume, Stories From a Lost Anthology... Michael Moorcock wrote the Introduction to this collection, a fact that delighted me then and still delights me, especially considering the fact that I have probably read more fiction by him than any other writer.


This morning I had my first acceptance of the new year. I'm pleased to announce that it's a novel. I haven't actually signed a contract yet, so I won't say too much more at this stage. It's a novel I am very happy with, but that's hardly a surprise: I am happy with nearly everything I write. Is that wrong? Probably. This particular novel is a journey from fairly conventional science fiction and steampunk beginnings to something much more odd. The publishing company that accepted it is very good at promotion and marketing strategy, so I should get to do some proper book-launches again. About time!

I have a strong feeling that my output of wordage for 2014 is going to be even lower than it was last year. But that doesn't matter. Quality is always more important than quantity. This year I will be concentrating first on writing new material for a future collection, New Milesian Tales, including the resumption and completion of a couple of novelettes I started many years ago (primarily two pieces entitled '500 Eyes' and 'In Trance'). I also want to finally finish writing The Clown of The New Eternities. Every year I make a resolution to return to that novel and complete it. This year I really must do so!

Telescopes is an Ebook 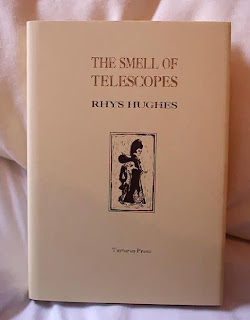 My fourth ever book, The Smell of Telescopes, was published back in the year 2000 by Tartarus Press. Rated by Michael Moorcock as one of the top ten 'overlooked speculative fiction classics' it consists of 26 short stories, some of which are collected into three story cycles which all converge (and are resolved) in the final story in the book.

Telescopes remains one of my best books, I think. The second edition was published by Eibonvale Press in 2007. The original Tartarus edition is now worth a fair bit of money. I am therefore hugely delighted to begin the new year with an announcement that the book is now finally available as an ebook more than thirteen years after it first appeared. It can be obtained directly from Tartarus here.

It is also available on Amazon and elsewhere...