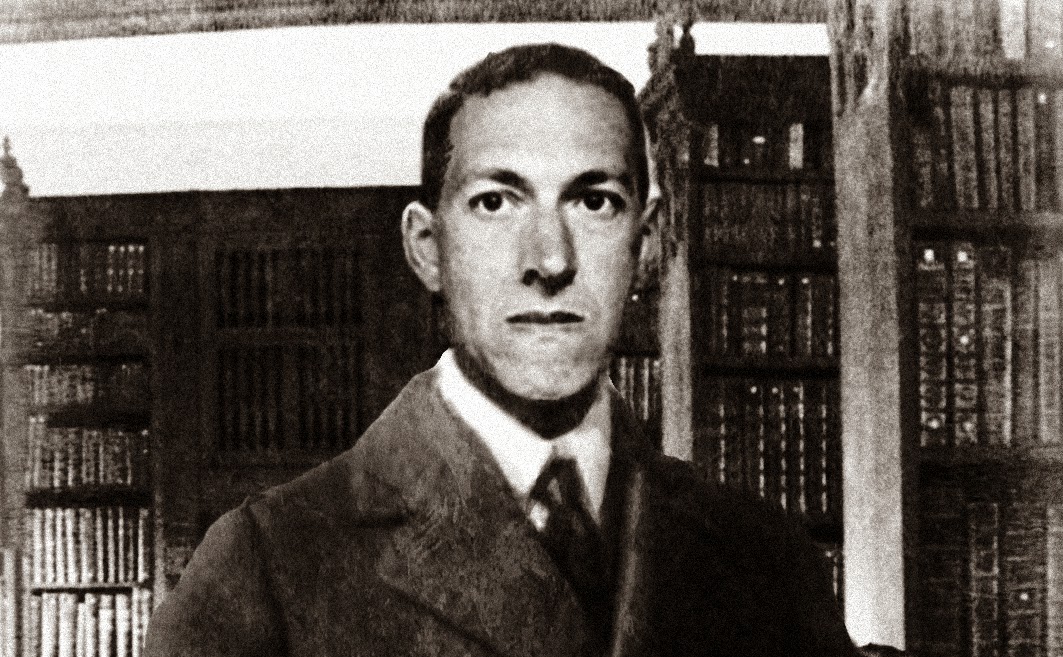 With luck I am going to a Lovecraft-themed event next month where I'll hopefully get the chance to do a reading and be on a panel and argue my own corner about this flawed but hugely important author.

Lovecraft was not an accomplished writer. His prose is grammatically and syntactically weak, his story structures ponderous and ineffective, his conceptual abilities poor, his descriptive powers misaligned, his characterization nonexistent, his politics repellent... and yet his work still has 'something'. What is that something? I have often wondered. I have wondered for years.. This morning a plausible answer came to me. He gratifies (or at least assauges) the revenge yearnings of readers who feel they have missed out on life.

The main underlying message of his work is this: "Don't worry that you were too shy and inept and unlucky to live an exciting and experience-rich and successful life. Humanity is worthless anyway and will be destroyed by monstrous cosmic forces. And by reading these stories, and enjoying them, you are associating in a small way with those very powers of darkness and evil that will annihilate petty human concerns, so actually you are superior and not inferior to all those people you have envied for so long who always seemed to get the girl, the luck, the happiness..."

This might sound totally disparaging, it's not really. This message (if I'm correct) is a human reaction to a human need and it fulfills the needs of others. 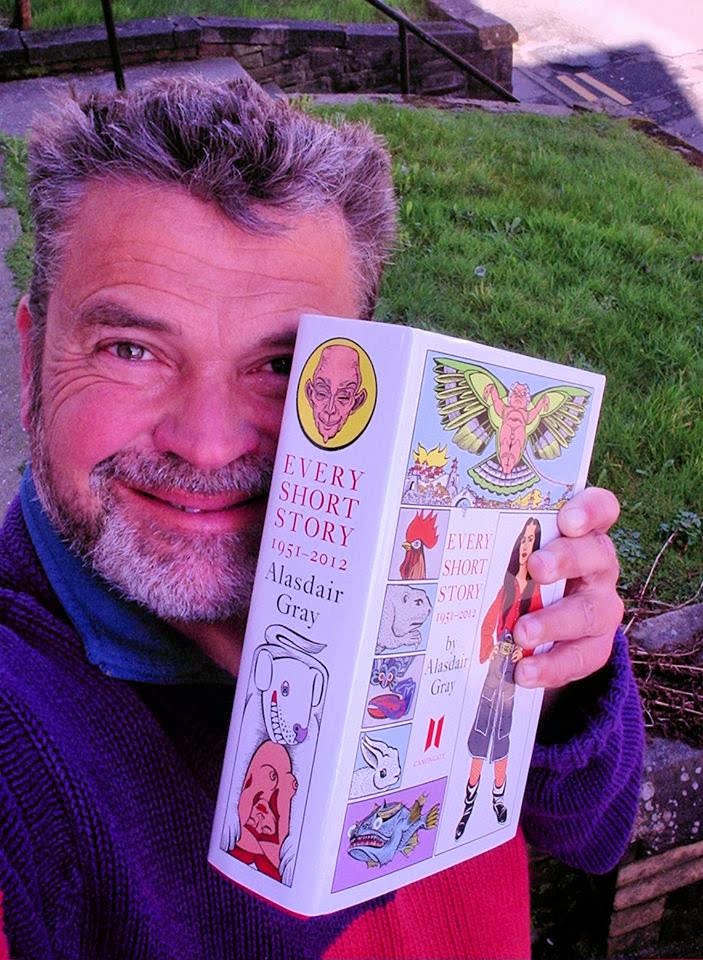 Actually the following book spans sixty one years but I couldn't resist the pun in the title of this blog post. Anyway, this arrived for me the other day. Filled with scores of superb stories (including my favourite ever novella, 'Five Letters from an Eastern Empire') it's a thousand page monster and spans almost the entire career of one of our most original and brilliant living writers. Furthermore the design is a work of art because the volume is crammed with Gray's illustrations and he is one of our finest draughtsmen. I am going to stick my neck out and declare that this is the best collection of short stories ever published...

Gray is one of my biggest literary heroes. I met him once, back in 1995, and he was a delightful bloke. Publishers say he can be "awkward" but I find that hard to believe. Mind you, I haven't worked with him. He did, however, sign my copy of Poor Things and it's a book I have treasured ever since. What I like about Gray's work so much is that it's simultaneously intellectual and emotional, personal and political, profound and light, serious and comic: it's writing for the head and the heart at the same time. I would love to be regarded as the Welsh 'equivalent' of Alasdair Gray one day. I have a heck of a lot more work to do to earn that accolade! But it remains an aspiration. 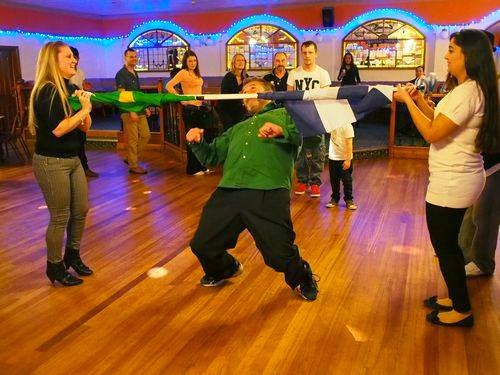 So many of my recent posts have been about books, mainly my books, that I thought it would be nice to talk about something else for a change, like I used to...

I have got back into exercise again, running and cycling mostly (but no climbing yet) and dancing too! The great thing about dancing is that it can be vigorous exercise but is so much fun that it doesn't feel like an ordeal. I am going to try learning salsa again and a few other styles.

On Saturday night I went to a show hosted by a local group of international Latin Music enthusiasts, musicians and dancers called La Gente. This photo shows me attempting the dance known as the "limbo". I found it extremely difficult and kept falling over. I did finally manage it successfully though! 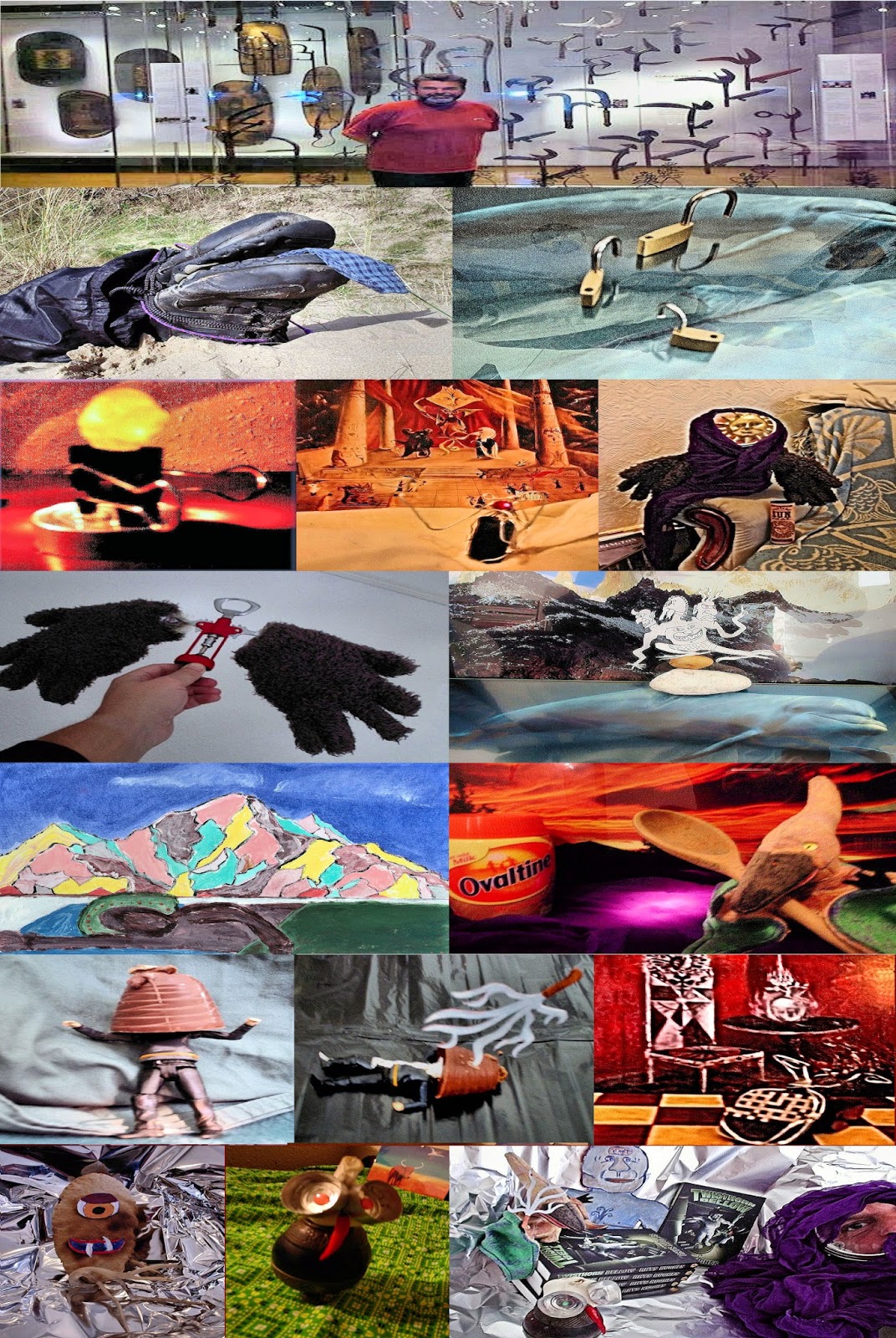 Out of print for two years, my novel Twisthorn Bellow is coming back into print soon courtesy of my own Gloomy Seahorse Press. The best thing about publishing my own books is that all the design choices are up to me. I can insert little illustrations throughout the text and use typographical tricks and know they will appear unaltered in the final book. The freedom is rather wonderful.

I have just prepared the back cover of this novel and here it is. It features many of the monsters that appear in the text itself. The monsters are (from left to right and from up to down)...

Shylock Cherlomsky: Not really a monster as such, but his mind and heart are monstrous. Here we see him in the basement beneath the Ethnology Department with the collection of kpingas at the disposal of his Agency. (I modelled personally for this one)

Baddie TwoShoes: a sort of footwear komodo. He’s the pet monster of Lord Doublestuff, who always does everything twice. In keeping with his owner, Baddie TwoShoes has two soles. Baddie TwoShoes, you don’t think, don’t joke, what do you do? Eat goodies, is the answer to that!

Bob the Lock: The graceful but evil padlock swan, swimming serenely with his wife, Raypova, and his son, Paddy.

Crystalbonce: He may look like a bulldog clip balanced on an inverted tea light with a yellow crystal for a head, but Crystalbonce is an extremely suave and dastardly robotic being. He’s French and his cry of “C’est pour toi que je suis!” has been known to strike terror even into the unbeating hearts of golems.

Highly Contrived Name: at home in the city of Moonville.

Ruby dubDub: standing above an indoor sundial. Some people don’t believe in the existence of indoor sundials, but they are useful. She appears to have acquired the hands of Enid Hans. Ah well!

Enid Hans: He isn’t French but Prussian and he has massive hands! Not only can he use them to grip and gesture, but they enable him to fly too. That’s quite bad! In an emergency he can even open bottles of wine. Makes him more sociable.

Janrel MacScabbard: Here he is balancing on a cairn that is being carried on the back of a dolphin. That happened in Patagonia; and if you look closely you can see a ghostly set of books in the mountains. Spooky! Educational!

MeMeMeMeMe U, a yeti who enters Britain without a visa when the block of ice that entombs him is shipped from Tibet to the Imperial Ice Museum in London. Then global warming thaws him out and all hairy hell breaks loose! After many adventures he returns to a secret valley in Tibet and grows old gracefully, losing all his hair, which is how he is depicted here. Coincidentally, a hairless yeti closely resembles a badly painted brown man!

Ptula Graaark. The work of a pterodactyl includes soaring, swooping and croaking. This example of the species, Ptula, is preparing a nightcap of Ovaltine, one of the few reliable methods by which a stressed pterodactyl can become a calmodactyl. Or so it is rumoured.

Two photos of the arch villain République Nutt follow. First we are presented with a frontal view, showing clearly the fiendish Walnut Whip Helmet that he wears atop his head. The Walnut Whip Helmet has the power to create unfounded rumours and transmit them across vast distances. One of the first rumours it created was the rumour of its own existence in a cavern deep under the city of Strasbourg. That’s how République Nutt was able to get hold of it! The second photo shows his death at the hands of Twisthorn Bellow. I’m pleased to report this isn’t actually how the fiendish chocolate-headed rascal dies. We see Monsieur Nutt impaled on the golem’s favourite weapon, the kpinga, a throwing-sword typical of north central Africa, but in fact Twisthorn deals with his foul enemy unarmed.

Sappy Ever After: The robot villain is relaxing in his private chambers in the city of Moonville just prior to being mailed as a parcel to his enemies. He has an incorrectly completed crossword for a face and this explains his cryptic but pithy fury.

The monster in the next picture is the diabolical pitta bread cyclops known as Snagtooth Toasta. To make him I toasted him in my new toaster, balanced him on a piece of driftwood and arranged him against a backdrop of silver foil. Only joking: he’s a real monster!

Tiktac Spittlegit: He’s not French but he’s malign! He can transform into any domestic object and has no ‘basic’ topology. Here we see him changing so rapidly between the forms of garlic bulb, bird eye chilli, mate gourd, tea light case and drawing pin that he appears to be all those things at once. Which makes him look like a bad owl. This photo of him was done on a Monday. Owls don’t like Mondays. They want to hoot the whole day down.


The first three Gloomy Seahorse titles are now also available as ebooks. They are as follows:

More Than a Feline: an illustrated collection of cat-themed fiction and poetry.
£1.23 from the British Amazon
$2.06 from the American Amazon

The Gloomy Seahorse: poems
£0.77 from the British Amazon
$1.29 from the American Amazon

Flash in the Pantheon: 123 flash fictions
£2.46 from the British Amazon
$4.12 from the American Amazon 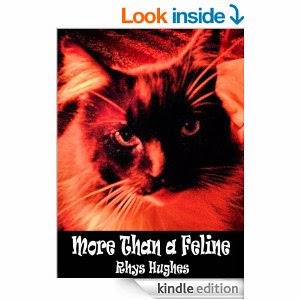 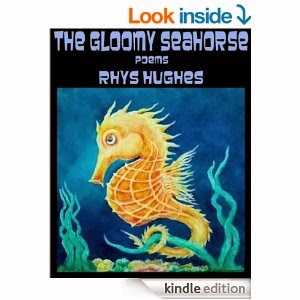 Des Lewis has started one of his 'real time' reviews of Flash in the Pantheon, reviewing one story every day. Click here to read what he has written so far. It's going to take him a long long time...

Other Gloomy Seahorse titles will follow as ebooks as they are published. Future titles include Journeys Beyond Advice, The Less Lonely Planet, Twisthorn Bellow, Mirrors in the Deluge, Tellmenow Isitsöornot, My Rabbits Shadow Looks like a Hand, The Crystal Cosmos, etc. 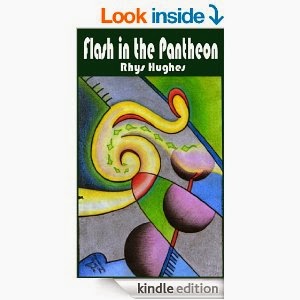 My Gibbon Moon imprint will publish new writers, works by forgotten masters and books by excellent foreign writers who haven't been adequately translated into English before. For starters you can expect The Twilight of the Gods by Richard Garnett, Old Tales from Spain by Felipe Alfau, The Exploits of Engelbrecht by Maurice Richardson... and a fabulous novel from a previously unpublished writer, Faery Story by Michael Westley.

All these books will be available as paperbacks and ebooks soon, soon, soon!


Well, I made the film I said I was going to make! It features my very first attempt at stop-motion animation and needless to say it's like Bagpuss gone bad. But it was fun to make and at the end of the day that's what counts.

The film is basically me reciting a small selection of the fables that can be found in the book. The book is currently available from Lulu here and soon will be available from Amazon too.


Click on the arrow in the centre of the above image to play the film. Hope you enjoy!