My next official book is going to be The Lunar Tickle, the collected spacetime adventures of Thornton Excelsior. This book will be published by Doghorn Press, who also issued my Mister Gum novel a few years ago. Emmet Jackson, the artist who did the superb cover for The Young Dictator has excelled himself again in producing a wonderful cover, which I shall reveal soon in a future blog post. 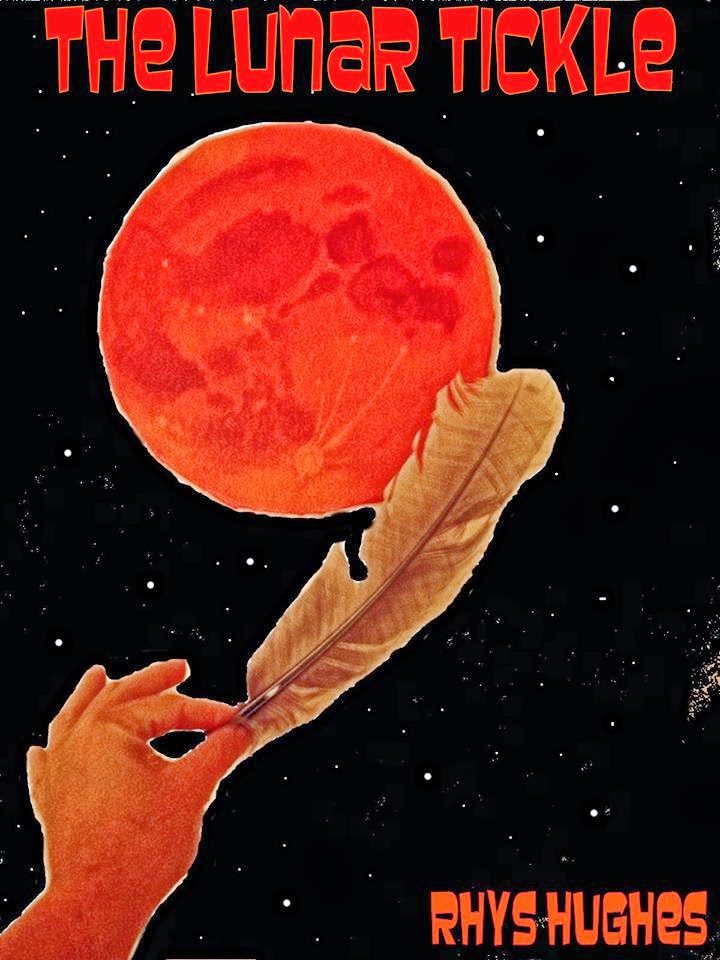 In the meantime you are going to have to view my own amateurish cover. This cover is for the limited edition only and I created it in my bedroom. Anyway... This is how the limited edition works. Twenty people will be given the chance to be the main character in the book. Only twenty and no more. If you are interested, simply let me know. When I have twenty names the offer will close. I will create a version of the book in which you are the main character, then I will send you a secret link enabling you to buy that version. You will have 24 hours in which to buy the book.

You can buy more than one copy if you wish: you will be the main character in all the copies you buy. But be aware that copies will cost £11.99 and there will be postage on top of that. So you might end up paying £15 in total for each copy. That's your choice. If you want to send me a photo of yourself to include in the book, please do so! 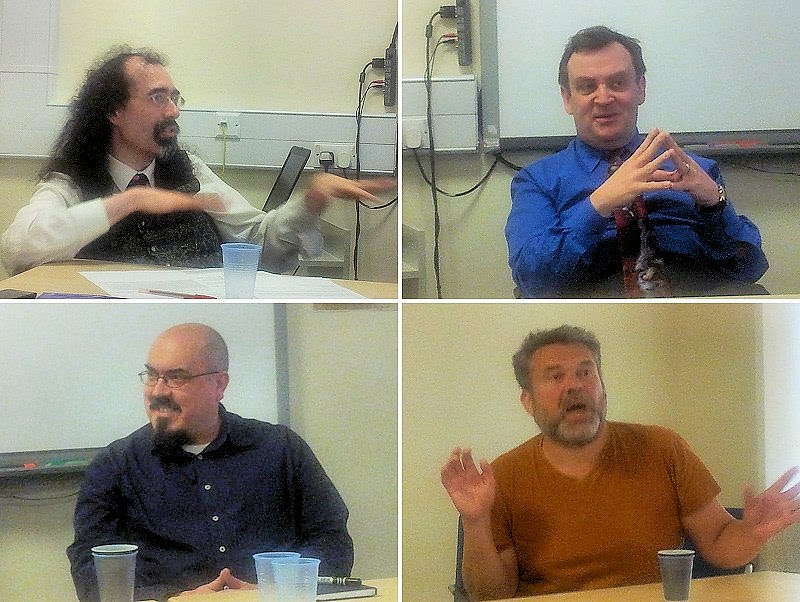 I went to the Lovecraft event at Swansea Central Library on Saturday. In the morning I read extracts from my story 'The Bicycle Centaur', which is one of the stories in the Cthulhu Cymraeg anthology that the event was partly a book launch for. The germ of my story was provided by a letter in which Lovecraft claims to love cycling so much that he is in danger of turning into a bicycle centaur. I explained that far from from being a derogatory satire on Lovecraft's style and concerns, my story is actually an attempt to push the techniques of parody beyond normal parody in the hope of discovering something new. Whether I ever succeed in my endeavors in this regard, of course, is another question.

In the afternoon I took part in a panel discussing various aspects of Lovecraft's work and heritage, dwelling both on the positives and the negatives. This photo (courtesy of Steve Upham) shows the four members of the panel: Gwilym Games, John Llewellyn Probert, Mark Howard Jones and myself... Arranged like this, the four photos look like a "How to Do Jazz Hands" explanatory diagram, starting with the Gwilym position and moving on... Alternatively here are some captions for the photos: (1) "Cosmic Horror? Just like that!" (2) "This is the badly constructed pyramid that Lovecraft's story ghost written for Houdini was set in." (3) "The empty speech bubble has been drawn wrongly. It's behind me and too big and not connected by a stalk to my mouth!" (4) "Cthulhu, how I love ya, how I love ya, my dear Cthulhu!" 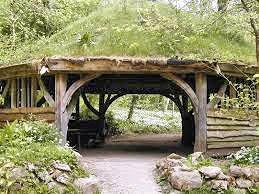 The evening of the same day I went to a celebration of the Pagan festival of Beltane at the Roundhouse in Caswell Woods. This was an interesting experience. It rained but we managed to get a fire going anyway. I enjoyed the ceremony. It felt nice and deeply human and I can see the appeal that Paganism has for so many people. I also hugely appreciated the opportunity to play the drums and shakers while one of my friends who had been chosen to play the May Queen was chased around by the May King. There's a comedy aspect to Paganism that is totally refreshing and quite unlike the constricting sombre atmosphere of so much organised religion. 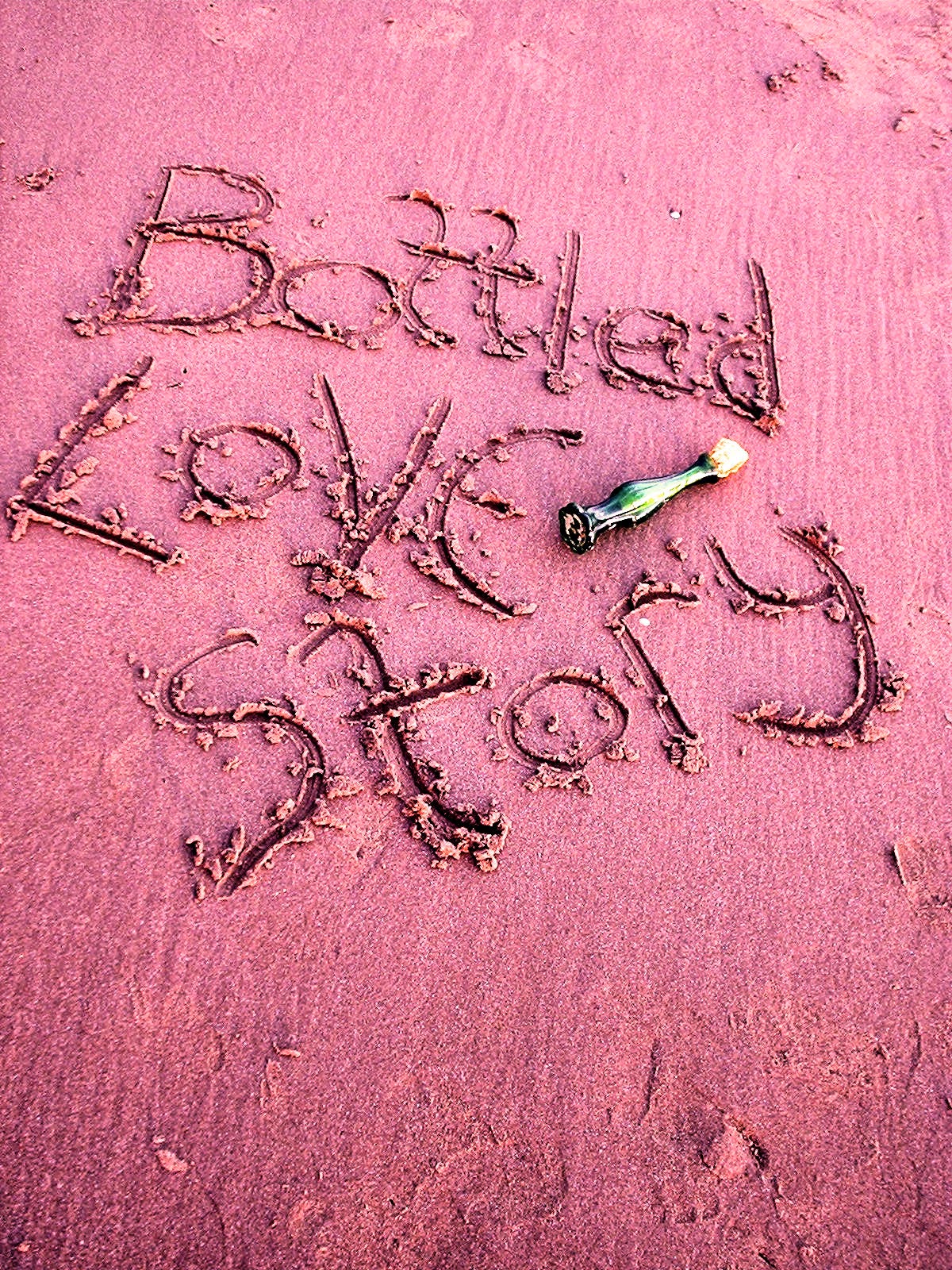 I was challenged to write a love story. I have written very few such tales over the past twenty years, just two or three in fact. I accepted the challenge and have just completed a 14,000 word love story novelette and turned it into a slim volume. At one point the story stopped being about love and started to be about chess, infinity and monsters instead; but I managed to get it back on track by allowing the digressions to determine the structure of everything that followed. So, for instance, the ramifications of a particularly tricky chess problem became the love problem that the main character has to solve (with flowers, smiles, winks, laughs, kisses and sighs for pieces instead of pawns, rooks, knights, bishops, queens and kings). This is the way I work. I always try to balance a precise mathematical structure with improvisation. The book should be available soon. In the meantime, this photo reveals its title... 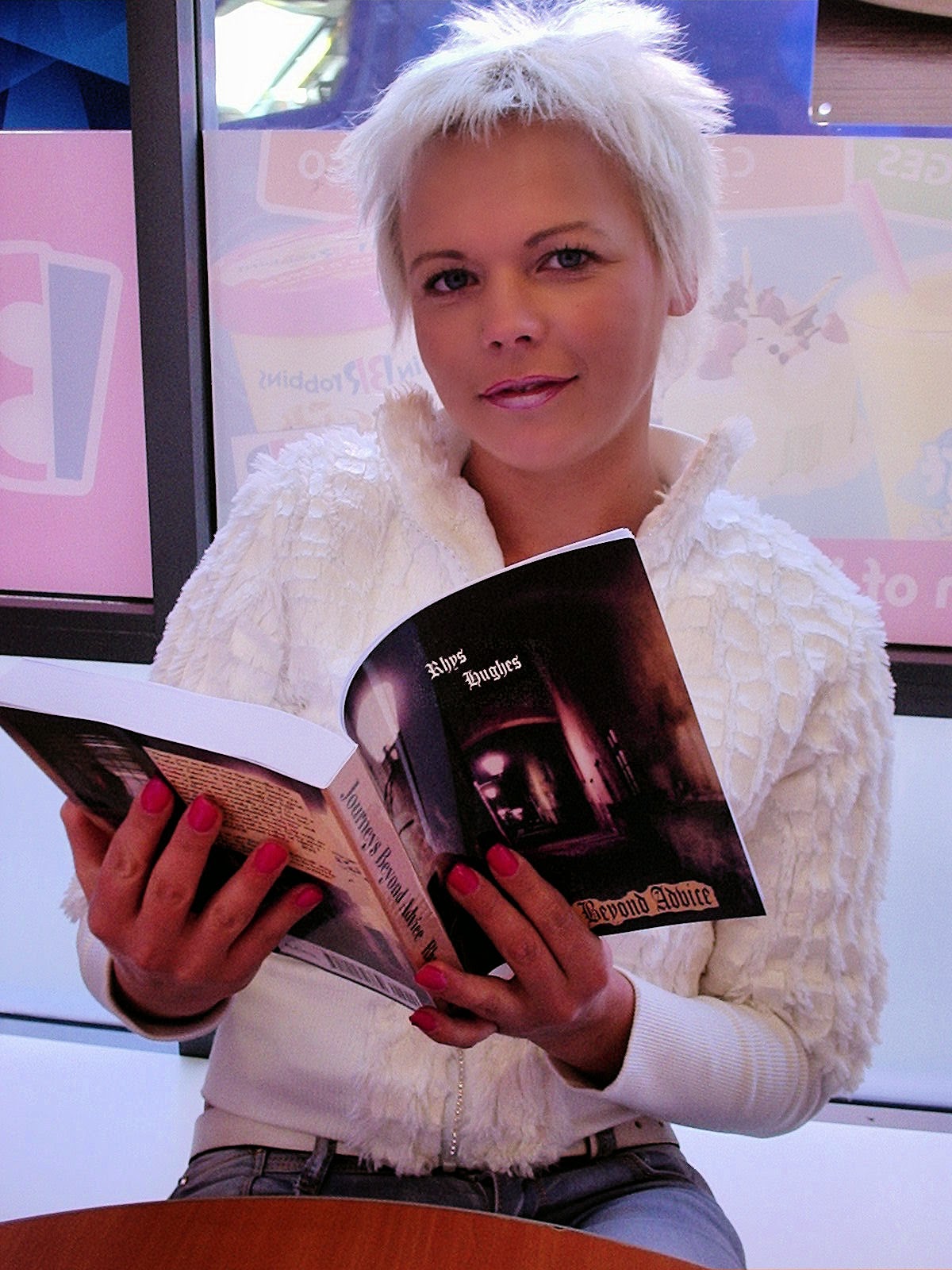 The wonderful Kseniya Gomzjakova poses with my Journeys Beyond Advice, which is a collection of novellas, novelettes and short stories that were inspired by William Hope Hodgson, H.P. Lovecraft and Jorge Luis Borges in equal measure. This volume is therefore more seriously 'gothic' (or 'weird' in a particular supernatural-story sense) than most of my books and features ghosts, angels, occultists, devils and monsters galore and all without humorous intention. For reasons I have never quite understood, sober and straight weirdness is far more acceptable to the palates of most readers of fantastical fiction than the intoxicated and ironic kind.

The original hardback was issued by Sarob Press back in 2002 and now fetches high prices. It went out of print not long after publication and has been out of print for nearly 12 years, so I decided to bring it back into existence under the aegis of my own Gloomy Seahorse Press.

This paperback version is considerably cheaper than the limited edition original. It can be obtained directly from Lulu (in which case I get a bigger cut) or from Amazon... The book contains the novella 'The World Beyond the Stairwell' (which John Clute rated as the finest Hodgson tribute tale ever written) and the novelette 'The Swine Taster' (which for a long time I regarded as my best ever story).

Finally, a word about Kseniya: not only is she one of the most beautiful women I have ever met but she is also an extremely nice person and if you're on Facebook you can check out her page here. The book is dedicated to her. 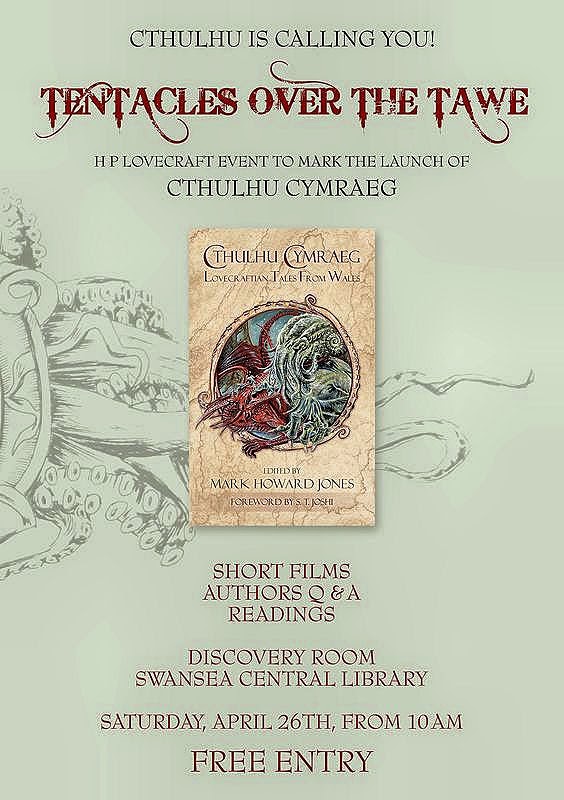 This has the potential to sound very egotistical, pompous and puffed up, so I need to very careful as to how I phrase it. Ready?

I don't get invited to do talks very often. Maybe two or three times a year, and this surprises me because my knowledge of literature is rather wide and also quite deep. Personally I think I deserve to be invited to do more talks and readings and panels.

Anyway I am doing a talk and taking part on a panel themed around the fiction of H.P. Lovecraft on Saturday April 26th at the Discovery Room in Swansea Central Library.

I plan to play (semi)-devil's advocate. I think this is only right and proper. Otherwise the event will end up being too much of a communal kowtow. I want to talk along the lines of, "Why, if Lovecraft isn't a very good writer, is he 'good' nonetheless?" 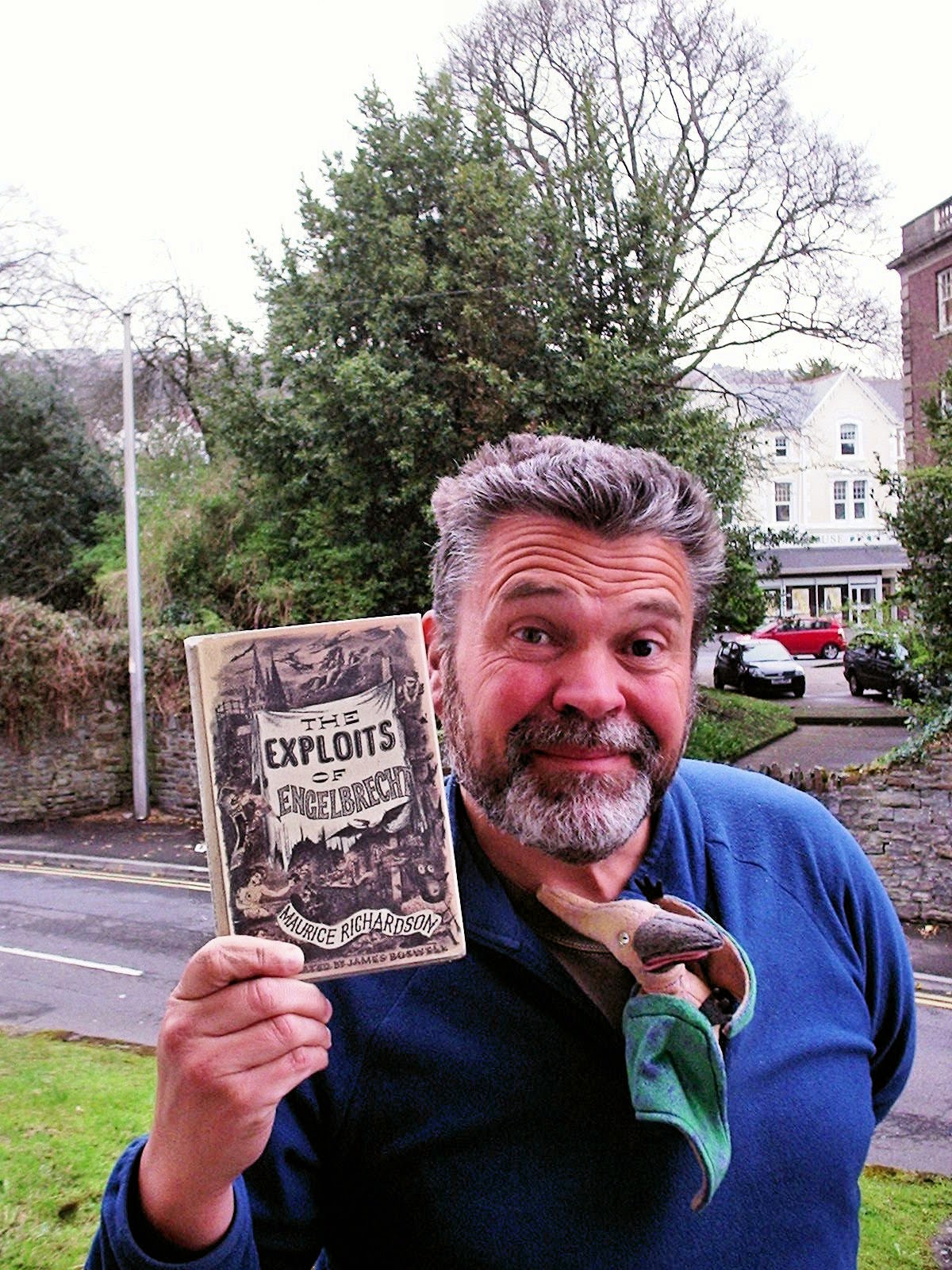 "To my mind one of the best examples of imaginative fiction to appear in England since the war is Maurice Richardson's The Exploits of Engelbrecht... These 'Chronicles of the Surrealist Sportman's Club' are superbly laconic pieces, concentrating more original invention into fewer words than almost any writer I can think of. They outshine, for me, almost anything else remotely like them, including the stories of Borges and other much admired imaginative writers." -- Michael Moorcock

Written in the 1940s and published in the legendary magazine Lilliput, the stories of Engelbrecht the dwarf surrealist boxer were collected and published in book form in 1950 by Phoenix House. That edition didn't sell very well but it become a  'cult classic', beloved by a small number of highly enthusiastic readers. It was republished by John Conquest in 1977 in an edition that also didn't sell. And then published for a third time by Savoy Books in 2000 in a deluxe edition that sold as poorly as its two predecessors...

...except that recently there seems to have been a very belated surge of interest in Engelbrecht: the Savoy edition has gone to a second printing at last; and a French translation seems to be doing well, better than any of the English editions in fact. My own sequel to Maurice Richardson's masterpiece was one of my slowest selling books, but there also seems to be a belated surge of interest in that one too; it can still be obtained from Dead Letter Press for only $30. It's a very beautiful book indeed.

One person who took note of my sequel was Richardson's daughter, Celia, who got in touch with me. It occurred to me that what was needed was a low cost edition of her father's book. We discussed this idea and she gave me the rights to publish an ebook version of The Exploits of Engelbrecht under the aegis of my own Gloomy Seahorse Press. And after various delays it is finally here!
Amazon UK
Amazon US

I also decided to turn my own sequel into an ebook...

It can be obtained from Amazon as follows:
Amazon UK
Amazon US

Formatting this one proved very tricky because it's full of unusual layouts.... Anyway, out of all my books it's the one I slaved most over and is packed with more incident than days in a millennium... You don't have to read the original to understand the sequel as it's a stand-alone novel as well.