Mirrors in the Deluge Contract


I am delighted to share the official announcement of my new book of short stories, Mirrors in the Deluge, which will hopefully be published next year... 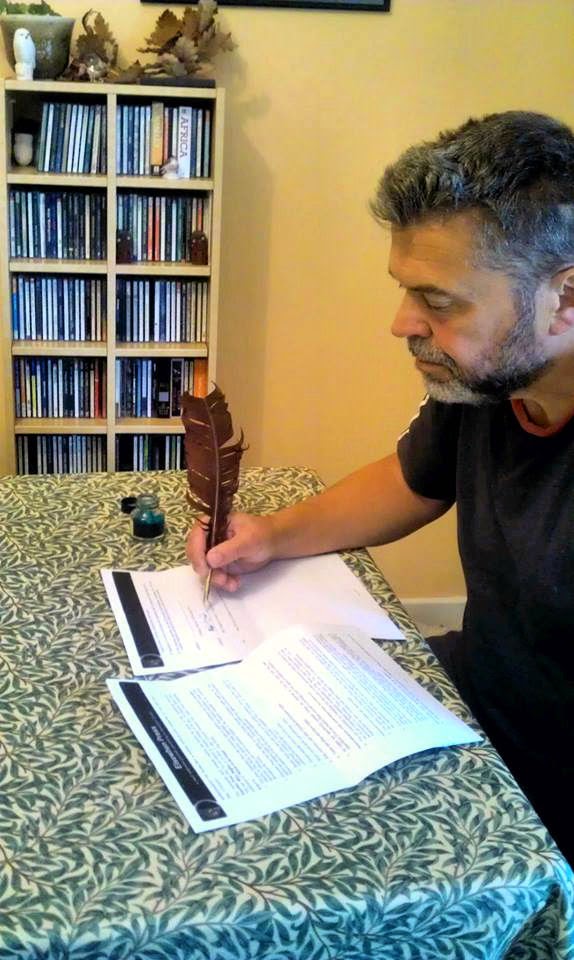 I had this particular title 'in storage' for many years before finally putting together a collection worthy of it. The title is a variation of A.Merritt's Dwellers in the Mirage, which for a long time has been one of the most sonorous titles I have encountered for a book.

The press release can be read on the publisher's website here. I am extremely happy with the way I have been treated by these publishers so far. They seem very professional, upbeat, vigorous, and they appear to have vision, which is a quality in scarce supply in the publishing world at the moment.

As for the 'Absurd Welshman' description of myself... The publisher discussed this joke with me and I told him to ahead. I have never had any problems with self-deprecating humour. Indeed, it's an essential for any creative to be able to laugh at themselves from time to time.

The photo shows me signing the contract last week. I have been signing many things lately. I decided to be a bit quirky and use a quill pen and turquoise ink.

Mirrors in the Deluge comprises 32 stories and is scheduled for release in 2015. Further details will be posted periodically on this blog. I am very excited about this book! 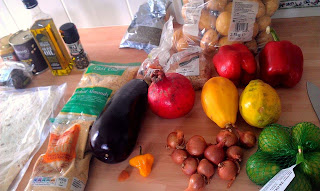 The supposed point of my blog is mainly to talk about my writing life and achievements. I use the word 'achievements' in a way that is both proud and ironic. I am proud of what I have managed to accomplish so far, against the odds, but I am also aware that I'm still a long long long way from being a huthold name, let alone a household name! And I do have some exceptional writing-related news, but it has to be withheld for a couple of weeks. Therefore I shall make this particular blog entry about something completely unrelated to literature. 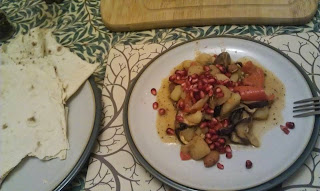 I recently cooked a tagine for a friend. The first photo shows the ingredients. I made my own harissa and used dates instead of prunes. The couscous had chickpeas and almonds in it. The basic recipe can be found here but you can modify it as you please. I put the pomegranate seeds in a dish and then added them at the last minute when the tagine was served.

The second photo shows the leftovers the following morning, which I had for breakfast, with lavash bread and coffee. My friend makes excellent coffee and uses the grounds afterwards to tell fortunes. Her skill with Tarot cards is also remarkable. 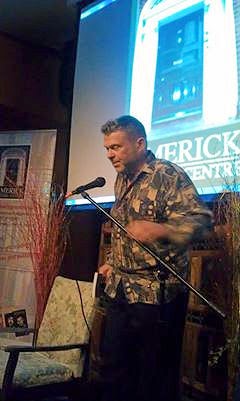 I have just returned from Ireland. I went there at the invitation of my publisher Mark Lloyd to promote my novel The Young Dictator. In essence this was a book launch one year late. The event was tied in with Limerick being chosen as the 'City of Culture' for 2014. I did a reading in an old theatre with a bust of James Joyce watching me. It's always a pleasure to be in Ireland.

It wasn't all work. In fact it mostly wasn't work. The far west of Ireland is a remarkable place. One morning during my stay, my publisher revealed to me the amazing fact that Father Ted's house was in the vicinity. It is a private residence in the far west of Ireland, but we went up the driveway anyway and knocked on the door. "May we take some photos outside the house?" we asked the woman who answered. She not only gave us permission but also gave us a bishop's mitre and a prepared sign. Then she invited us indoors and showed us the room where Bishop Brennan was kicked up the arse and the "I'm not a racist" window. 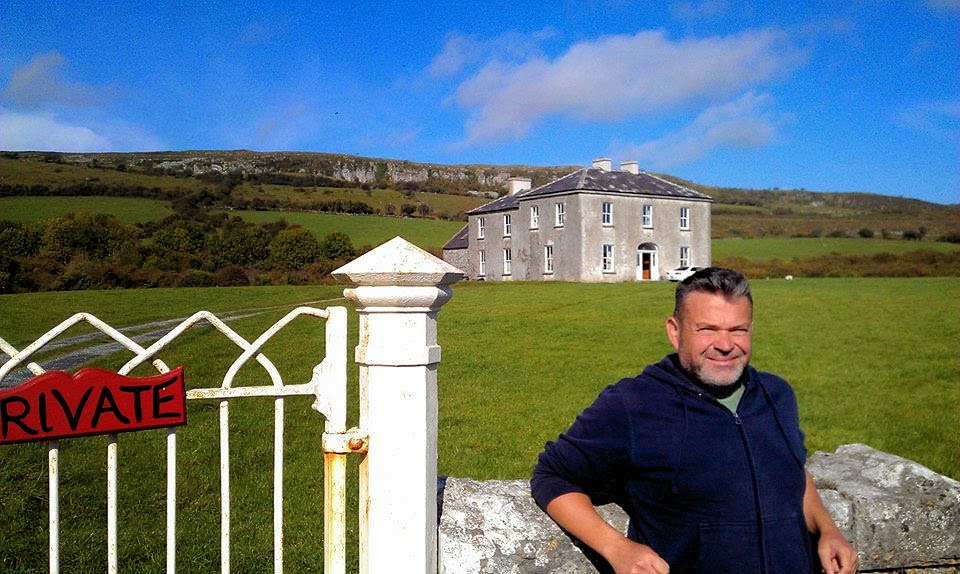 We also had time to explore County Clare, including the spectacular Cliffs of Moher. There are castles and abbeys and towers and other ruins almost everywhere. The region of the Burren is an extraordinary karst landscape that I plan to hike properly one day. Rather oddly the weather was quite good. It turns out that the Burren has its own climatic zone that is different from the rest of Ireland, much milder and drier. It hardly rained at all during my visit. This surprised me a lot.

I also ate extremely well during my stay and my publisher was very generous with buying me pints of the black stuff. 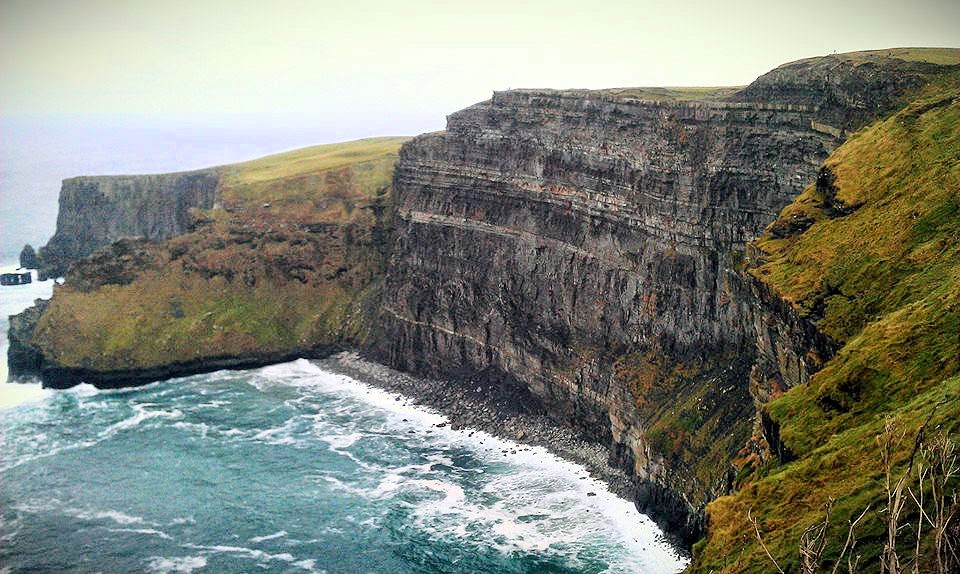 The entire trip was extremely enjoyable with the exception of the ferry crossing from Wales to Ireland, which took place in a storm. I have been at sea in storms before, but this one was particularly bad. All the ferry companies cancelled sailings with the single exception of Irish Ferries. "We are going to try anyway!" the captain cheerfully announced. I had blithely announced that "I never get seasick, I am a seasoned traveller" before departure, but I was soon forced to eat my words. Or rather, everything that I had eaten decided it preferred to be back out in the world.

The Young Dictator is available from bookshops and online from Amazon and elsewhere... I really want to write a sequel to this novel, so I need you to consider buying it. The more copies it sells, the greater the chance I will be asked to write a sequel...