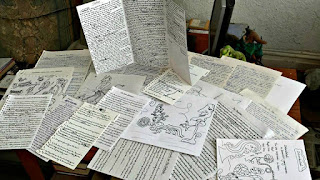 As mentioned in my blog post below, certain copies of Brutal Pantomimes come with a handwritten story, poem, sketch, drawing or other piece of work.

These items are allocated randomly. There are 71 of them, so it is far from guaranteed that anyone who orders a copy of the book now will receive one; but that's the nature of such offers, I guess.

The manuscripts include my first published story, 'An Ideal Vocation', written in 1991, and even one story written before that, a story I lost for 20 years, rediscovering it in a box in a cellar of a friend's house, as well as some of my most recent work and lots of stuff in between. 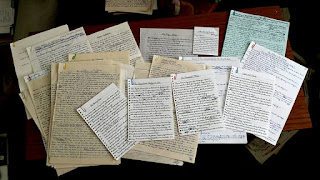 Some of the manuscripts are only one page long; others are many pages. Copies of my book are being sent out now, so I know already that the editor and author Maxim Jakubowski has received the handwritten version of my story 'Nowhere Near Milkwood', written in 2002; and that was one of the longer texts. There are some even longer.

I have prepared a short text to explain the provenance of each piece to the readers who get one. There is also the manuscript of 'Corsets on the Outside', a story that actually appears for the first time in my new book.

BRUTAL PANTOMIMES can be ordered from Egaeus Press. 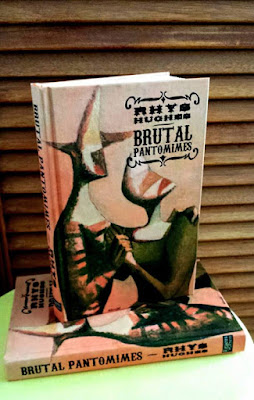 My new book has just been published. It's a beautiful looking hardback from the wonderful Egaeus Press, a collection that consists of seven short stories, two novelettes and one novella. The novella is 'The Impossible Inferno' which was my 500th tale, one that I strove hard to make especially notable. I am extremely pleased with this volume. It just feels right. The publisher's blurb declares:

"Brutal Pantomimes contains ten tales of absurd exoticism, weird adventure and wild fantasy from the shockingly prolific and highly acclaimed Rhys Hughes. Most of the stories, novellettes and novella included have not previously been published and some are regarded by their author to be amongst his best works. Enjoy pirate shenanigans, a globe of the Earth that is a voodoo doll, the dubious gifts of a Greek god, impossible angles, improbable sciences, impractical philosophies, a rare tropical yeti in a submarine and so much more."

I am delighted that the amazing author Michael Cisco wrote an introduction for my book.

Following the example of what happened when my Tallest Stories was published three years ago, I have collected together handwritten manuscripts of stories and poems, drawings, sketches and other material, as well as some ultra-rare chapbooks, to be given randomly to people who order my book. These special items total 71 in number and I prepared a document describing the provenance of them all. This document can be accessed by clicking on this link.

BRUTAL PANTOMIMES can be ordered directly from the publisher here.

I thank you for listening!