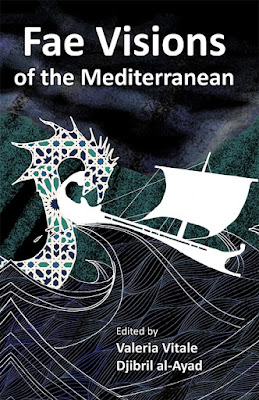 The wonderful folks at The Future Fire, a literary resource that has long been one of my favourite places on the web for reviews, have put together a fascinating anthology called Fae Visions of the Mediterranean, a collection of stories and poems themed around the Mediterranean Sea. It's a great core theme for fiction and verse and I am delighted to be a part of this project. As part of the promotion for the book, a series of interviews has been conducted with various contributors to the book. I was fortunate enough to interview the artist responsible for the excellent cover.

Tostoini is someone I knew nothing about before I conducted the interview. In some ways this is a hindrance to creating an interview and in other ways it might be an advantage. Anyway, with little more ado, here are the questions and answers. Take it away Tostoini!

Tell me a little about how important art is to your life?

It is very important to me, both as a producer that as an “end user” of art. I’m an avid consumer of good stories in every form and shape. This may sound like a trite stereotype, but I wanted to be an illustrator even when I didn’t know that’s how we call this job. For a number of years I wasn’t able to find time and energy to spare for my interest in art, and this made me bitter and angry. I was lucky enough to be able to make a complete change and now art is a big part of my daily life and work. We can say that it’s in the best interest of society if I make a living with my illustrations: I’m a more likable member of the human society this way!

Are there any artists who have directly inspired you? For this work in particular or in general?

Generally speaking, I have a couple of artist that had a big influence on me, Hayao Miyazaki and Edward Gorey just to name a few. I’m a big fan of Tom Gauld, Kate Beaton and Gemma Correll. Speaking of this specific cover, when I started working I wanted to capture the feel of Fae Visions, the idea of a Mediterranean art that’s not just classical art, all marble and Corinthian pillars. There’s a common culture, a lot of influences back and forth the shores of the Mediterranean Sea. I did a bit of research on motifs from the art and crafts, like the abstract pattern of Moroccan mosaics and the figures on the ancient black and red Greek vases. We also wanted to convey the mystery of the sea, the fact that despite years of explorations we still know very little on it, and that even a small sea like the Mediterranean Sea can be as huge and hostile as the ocean, as we are tragically aware in this days.

Why images rather than words or music?

I think that’s simply because I have fun drawing. And I love all the drawing paraphernalia, I can hoard all kind of papers and colours and pens and brushes and still try to persuade myself I need every single one of them for work. Also, I can’t carry a tune to save my life, so music is out of the question.

You say that you were bitter and angry. If you were shipwrecked on an island and could only take along one flavour and one emotion, what would they be?

This is a very bizarre island. I’ll take with me umami and surprise, so I could still be able to season my food and enjoy the experience.

What does the Mediterranean mean to you, if anything?

It is home. As simple as that. I was born and raised near a port city in Sardinia. I take that sea for granted for most of my life. Then I moved away and I discovered homesickness. Now as soon as the sun start to shine in the spring I start to have a longing for the sea and I start drawing starfishes, whales, manatees, fishes, seaweeds...

What is your favourite element in the periodic table?

I have a soft spot for element 117, currently referred to as “Ununseptium”, because that’s the one that maybe is going to be labelled as Octarine. (Please International Union of Pure and Applied Chemistry, humour us).

What, I’m stranded on that bizarre island again? What’s the problem with the islanders, why the urge to give up some food every time? I will keep them both, thank you.

I am sometimes incompetent. What things are you sometimes?

Absent-minded. And clumsy. Sometime both absent-minded and clumsy in the same moment. Yes, I can see the pattern.

Are there any projects you are currently working on that you would like to talk about?

I’m currently working on “Bestiarium”, a kids’ app for Art Stories, an Italian digital publisher that develop educational apps for children on art, history and heritage. It’s going to be an app on animals in ancient art and history, we are currently in the research stage and it’s so much fun. There are a lot of amazing mythological creatures around the world, so many stories and ideas. At the moment we are working on Maya civilization, Ancient Egypt and Roman Empire, to name a few. It’s going to be to be released in the fall, so I will start drawing and sketching in a few days.

You have to become a mythical creature for the remainder of your life. Which one would you choose?

I’d love to be Gamera. Or Morla from the Neverending Stories (or the Great A’Tuin, just to quote Terry Pratchett again). I thing I could be an amazing giant turtle, I have the personality for the role. 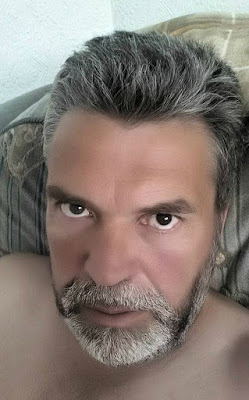 I have finally completed my 800th story. It has taken 27 years. And yes, this is the face of a man who has written 800 stories. If you want to know why I'm not wearing a shirt, it's because I finished writing my 800th story without a shirt on. I am just showing the moment as it was. But I can't honestly cite this photo as a realistic record, as there is a filter on the camera I was using that has smoothed out my wrinkles...

800 stories. I feel pleased with myself. Of course this doesn't paint the whole picture. I wrote many stories from a young age that were subsequently lost, so the real total is much higher than 800, but I have decided not to count the lost ones. Therefore my earliest surviving story dates from 1989 and I consider that to be story #1. A complete list can be found here.

Story number #800 is part of a new sequence of tales that will hopefully morph into a novella or even a novel. It's a weird Western and the overall title of the sequence (or novella or novel) will be The Honeymoon Gorillas. I have stated elsewhere that it's the first weird Western I have ever attempted but then I realised this isn't quite true. My novella 'The Gargantuan Legion', which forms the second section of my novel Captains Stupendous, is a Weird Western of sorts.

I have been interviewed several times in the past few months by various literary resources and websites. Why so many interviews should cluster at roughly the same time is partly a consequence of my recent book Brutal Pantomimes, which has received positive attention, and partly because I have had work accepted by numerous anthologies. Apart from the review with Weird Fiction Review, mentioned in my previous blog post, some of the other interviews are listed below:
Pan Review
The Future Fire
The Lowdown

Back to the grindstone now... But a coffee break first, I think! :-)