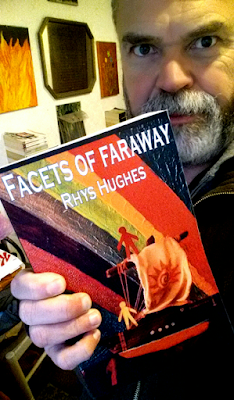 I have turned another one of my ebook-only collections into a real book. I don't intend to make a habit of doing this. It's the second and last time I will.

But I have doubled the length of FACETS OF FARAWAY by including lots of new work. I am very fond of these stories.

I have also deleted the old ebook and replaced it with a new ebook that includes all the extra stories.

The book is available from Amazon and other online bookstores, and details of the contents can be found as usual on my Aardvark Caesar site.

The stories in this collection are the kind of whimsical fantasies that I most enjoy writing. Unfortunately 'whimsy' isn't highly regarded in the contemporary fantasy world. Why this should be is a mystery, as some of the greatest fantasies ever written are whimsical in the extreme (the novels of James Branch Cabell for example), and in fact the entire genre in its modern form has whimsy at the core of its origin (The Shaving of Shagpat by George Meredith and Phantastes by George MacDonald among many others).

Whimsy is generally a tool rather than an end in itself, and I believe this is true of the stories in FACETS OF FARAWAY. It allows the imagination to branch off in more unusual directions than a more sober and sombre approach does. Also it doesn't mean that poignancy and profundity are excluded. A story can be deeply meaningful and lightly absurdist at the same time.

I read 82 books last year, the highest number of books I have read in any year of my life. I didn't plan to do this, it just happened. True, some of the books were short, i.e. single plays or slim poetry collections; but others were long novels and big omnibus editions. I doubt that I will ever read so many books in one year again, but who can say for sure? Anyone who cares to see what those 82 books were can check out my Goodreads page...

Reading highlights for me in the year 2019 were the 'Occupation Trilogy' novels of Patrick Modiano; Cities of the Red Night by William Burroughs (his best novel?); W.G. Sebald's Vertigo; the plays of Büchner, Ionesco, Lorca, Beckett, Sophocles, Aeschylus, Brecht, Rostand, and J.B. Priestley; the poems of A.E. Housman; William Goldman's The Princess Bride (surely one of the most charming fantasy adventure novels I've encountered); The Lost Steps by Alejo Carpentier; The Tenants of Moonbloom by Edward Lewis Wallant; Silk by Alessandro Baricco; Homage to Catalonia by George Orwell (one of the best non-fiction books about war I have ever read).

I also finished reading my reading of Richard Brautigan's prose works: there are none left for me to read. And I read a novel that has been sitting on my shelves for decades, in fact for 35 years, Dandelion Wine by Ray Bradbury, and I was astonished at how good it was, one of his best, perhaps his very best (and I am a huge Bradbury fan).I read Cannery Row by John Steinbeck, a writer I have a special fondness for (because he introduced me to 'modern' literature when I was young), and I found it to be excellent; I also read the sequel Sweet Thursday, which isn't quite as good. I discovered John Williams, finally read the wonderful Stoner and the not so great Nothing but the Night, and went out and bought Butcher's Crossing as my last book purchase of the year. But my most significant discovery of 2019 was the work of Ingeborg Bachmann. I intend to seek out as much of her work as I can get my hands on.

And yet my 'book of the year' is this one. The Penguin Book of the Prose Poem. I picked it up without any great expectations. And let's be clear: not every piece in this volume is excellent or even good. Far from it! There is a lot of pretentious nonsense here, word salad gibberish, and some of the best-known writers represented in the pages are responsible for some of the worst contributions. But there is enough brilliance to elevate the entire collection, and in fact I have even come to the conclusion that the gems are set off to better effect because of the presence of these duds. One of the things about this volume that works surprisingly well is that all the prose poems are presented in reverse chronological order, from our contemporary age right back to the 1840s when the prose poem first became a viable mode of artistic expression. I found this reverse order very affecting, I am not sure why.

This year I am hoping to have at least one of my plays performed on stage, radio or even as a film. We shall see :-) I began the year of 2019 in Kenya, and also went to Marseille, but spent too much time in the UK for my liking. Next year I am hoping to do a big trip in Africa, as well as a teaching post in Tanzania, before returning to the farm in Kirinyaga. :-)