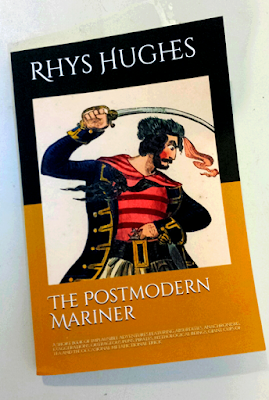 My long out-of-print book, The Postmodern Mariner, has come back in a second edition. I arranged this primarily so that I had a hard copy to send to my publishers in Serbia (there is going to be a Serbian translation soon).

It was originally published in 2008 by Screaming Dreams Press. It is described as "A short book of implausible adventures featuring absurdities, anachronisms, exaggerations, outrageous puns, pirates, mythological beings, giant cups of tea and the occasional metafictional trick..."

The contents are as follows:

(2) Piper at the Fates of Ooze
The Lip Service

I have included a bonus story in this second edition. 'Eight Blathering Buccaneers' is a set of interviews with the pirates in the novella 'Rommel Cobra's Swimming Carnival' (a story I am especially fond of).

Copies are available from Amazon and other online bookstores...