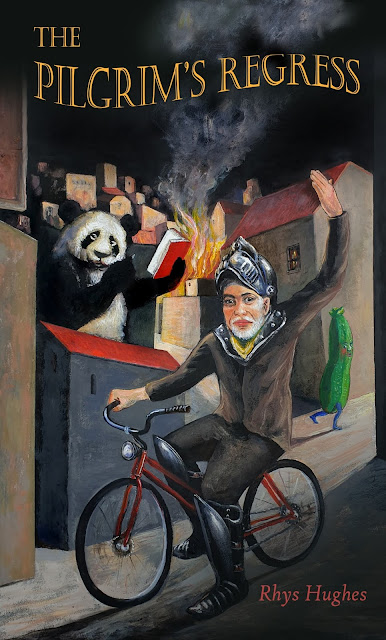 When I lived in Spain in 2007 I started writing stories about a character called Arturo Risas, the self-styled Duque de Costillas y Cosquillas. I was working on a farm in the Sierra de Guadarrama at the time and winter was drawing on. It was bitterly cold in the wooden cabin where I lived; and I huddled over a tiny heater while penning the tales, taking frequent breaks to do a typical comedy shiver: hugging my own arms and rubbing them with a vocal, "Brrrrr!!!"
I wasn't planning to do much with these little tales. They were just a divertissement to pass the dull evenings. But somehow they became the opening chapters of a novel called The Pilgrim's Regress. I added more chapters: the thing became intricate and extremely metafictional. I knew I had a monster of unsaleable humour on my hands. But then, midway through 2008, I ran out of steam and abandoned the project. That's not an uncommon habit with me.
But I always console myself with the knowledge that I'm able to return to any half-finished work at any time and take up again exactly where I left off. I always planned to return to The Pilgrim's Regress after only a brief pause, but as that "brief pause" grew longer and longer, I began to fear that all the little complexities of the numerous subplots, the intricacies of the connections between events, ideas and conceits would be lost to my memory. I knew I had piles of notes in boxes, but my notes are often just mnemonics that quickly become baffling if not acted on rapidly.
So it was with some trepidation that I launched myself back into the novel in the summer of 2011. And to my relief, it all came back; or rather, much of it came back, and what didn't was easily replaced with new (and perhaps better) things. It was good that I never abandoned poor Don Cosquillas permanently. And yet it has taken a further ten years for this novel to finally be published.
And here it is at last... The adventures of a knight as he roams with his trusty sidekick Sancho Panda over Spain and across Africa and all the way to India and the back of beyond on a bicycle. Cover art by the magnificent Selwyn Rodda.
Available on Amazon as a paperback or ebook.
# posted by Rhys Hughes @ 9:23 PM 2 Comments 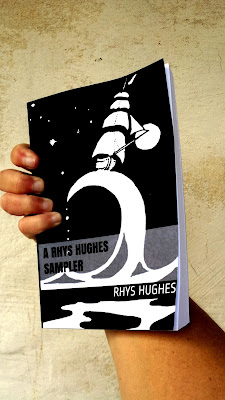 A paperback 'sampler' of my work entitled SAMPLER because potential readers often wonder what is the best entry point to my large corpus of fiction.

It features 48 stories, at least one a year from 1993 to 2020. All but two of these stories  ('The Chimera at Home' and 'Dogears') have been published before in other books. I regard this volume, however, as a very good cross section of my writing career to date. Details about the contents can be found on my Aardvark Caesar blog.

This book was published at the end of 2020 and samples 27 years of my writing career, but my writing career is 29 or 31 or 40 years old depending on how it is calculated. I began writing short stories when I was fourteen years old; made my first submission to an editor when I was seventeen (it was rejected); but had no fiction published until I was twenty-five.

I am currently reading The Pickwick Papers by Charles Dickens, a wonderful novel written when the author was 24. Dickens was already an accomplished novelist before I had even managed to sell one very short and very minor piece of fiction. Not that this fact is relevant in any way to anything. It just happens to be something I have recently been contemplating. 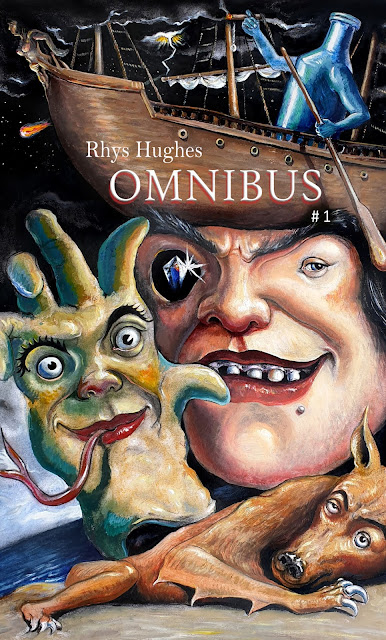 The first omnibus volume of several of my OOP (out of print) books is now available, with cover art by the always excellent Selwyn Rodda. The books contained in this omnibus are:

(3) The Sticky Situations of Zwicky Fingers

(4) The Just Not So Stories

This is hopefully the first of four omnibus volumes. Each will have a particular flavour. The flavour of this first omnibus can be said to be 'ironic adventure fiction'.

Some blurbs about my work....

"Rhys Hughes seems almost the sum of our planet's literature... As well as being drunk on language and wild imagery, he is also sober on the essentials of thought. He has something of Mervyn Peake's glorious invention, something of John Cowper Powys's contemplative, almost disdainful existentialism, a sensuality, a relish, an addiction to the delicious." — Michael Moorcock

“It’s a crime that Rhys Hughes is not as widely known as Italo Calvino and other writers of that stature. Brilliantly written and conceived, Hughes’ fiction has few parallels anywhere in the world. In some alternate universe with a better sense of justice, his work triumphantly parades across all bestseller lists.” — Jeff VanderMeer

“If I said he was a Welsh writer who writes as though he has gone to school with the best writing from all over the world, I wonder if my compliment would just sound provincial. Hughes’ style, with all that means, is among the most beautiful I’ve encountered in several years.” — Samuel R Delany 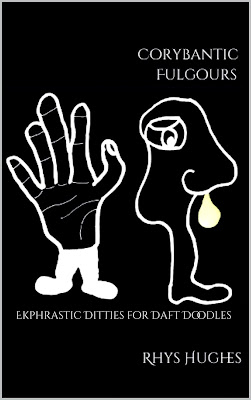 "Who are the Corybantic Fulgours? They are monsters. They live in a room, a room as large as the inside of the Moon, and in this room there are all sorts of ways and means, odds and ends, curves and bends, and no one but no one can ever say what the right way from here to there is. Most monsters don't care about things like that, and the Corybantic Fulgours are made from curdled light, so they care even less. Let's open the door to that room and step inside..."

I have been doodling monsters most of my life. It only occurred to me recently that I could write poems for such drawings, poems that wrap around the outlines of those monsters. I was influenced by the illustrations and verses of Mervyn Peake's 'Moccus Poems' from 1929, though it goes without saying that Peake was a vastly better illustrator and poet than I am.

At first I had no firm ideas about how the project ought to progress. I simply doodled monsters and wrote poems for them at an accelerating rate and I kept going until I ran out of blank pages in the notepad I was using for the drawings.

The result is this little book of light ekphrastic verse. It turned out even better than I had hoped. To read some extracts please follow this link to a feature on my book that appeared in the October 2020 edition of Borderless Journal.

Corybantic Fulgours is available from Amazon and other online bookshops at the lowest price I was allowed to set for it.