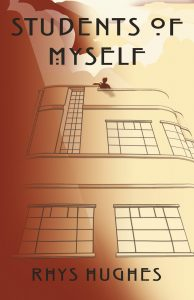 My new novella, STUDENTS OF MYSELF, is now available for pre-order from Elsewhen Press. This work is one of my personal favourites of everything I have written over the past 30+ years. In fact I regard it as my joint favourite with another forthcoming novella, MY RABBIT'S SHADOW LOOKS LIKE A HAND.
STUDENTS OF MYSELF is constructed with a framing tale and lots of stories within that frame. Together all these stories make up the bigger picture, which is the life of a university professor who is compelled to teach a subject he has no interest in. These stories are strange and become stranger as the book progresses. They feed back into the reality of the professor's world until he finally understands that the framing tale itself is framed by the stories within the frame. But paradoxes aren't the main point of this book.
The story is set in Africa, in an unnamed city that is an amalgamation of Cape Town, Maputo and Freetown, but there is a little of Rio de Janeiro in there too. There is a sense of hope, of a better future among the chaotic magic, provided the main protagonist can free himself from the limits that have been imposed upon him and which he has accepted.
The ebook will be published on June 11th and the paperback will follow two weeks later.
# posted by Rhys Hughes @ 2:09 PM 1 Comments 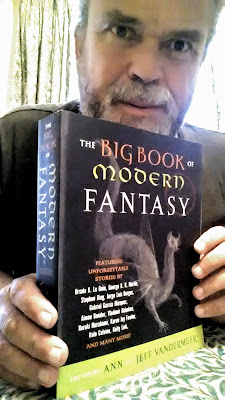 I am acutely aware that I don't update my blog very often. Social media has taken over the functions that my blog once provided. When I was more active with my blog, I would announce nearly all my writing news and also talk about what I had been up to in general. These days I only blog about my most important writing news and I say nothing about my non-writing activities. A lot has happened in the past few years and I have barely mentioned any of it here. Ah well!
That's the way things are. Priorities and protocols change. But I have been especially remiss in not blogging about one particular anthology in which my work appears, because it is perhaps the most important anthology I have ever been in. The Big Book of Modern Fantasy edited by Jeff and Ann VanderMeer was released last summer by Vintage and I received my author's copies in September. It is a vast book and a really remarkable one.
Vintage (one of my favourite publishers) were taken over by Penguin (also one of my favourite publishers) so one of my biggest writing ambitions has been realised, namely to be published by a large mainstream publisher whose books I have loved for years and years. More importantly for me, my story, which is a novelette, appears alongside many authors who I have worshipped during my long reading life: Nabokov, Borges, Calvino, Márquez, Ballard, Cortázar, Bulgakov, Delany, Jack Vance, Fritz Leiber, and many others, including Alasdair Gray and my favourite short story of all time (although it's more of a novella) 'Five Letters from an Eastern Empire'.
# posted by Rhys Hughes @ 2:54 PM 0 Comments