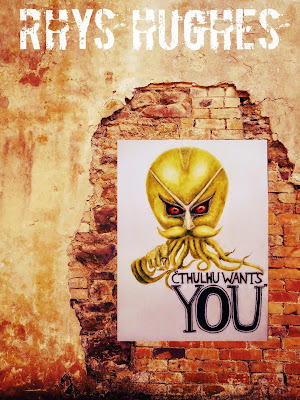 I have collected many (or most) of my 'Lovecraftian' tales into one volume. These stories are not parodies or pastiches but darkly ironic fantasies that connect with the Cthulhu Mythos at a tangent. Open-minded devotees of Lovecraft may find amusement in the offbeat ideas, paradoxical plots, whimsical language and strange originality of these tales. Lovecraft purists and horror fans with a visceral dislike of comedy might be repelled and outraged. Or they might not be. I am quite unable to anticipate the reactions of individual readers, let alone readers in groups or sets. There may well be no reaction to my book at all.
I regard Lovecraft as an important writer for several reasons, but these reasons tend not to be the same as those offered by his devotees to justify his high standing in the world of weird fiction.  He strikes me as a wholly emotional writer (rather than the cool philosophical rationalist he is often portrayed as) and the currents that froth and flow beneath his work are surely powered by an organic frustration instead of a scientific fatalism. I may be wrong about this, and I surely have no intention of viewing his stories through a Freudian lens, but it seems to me that his palpable yearning for a better life drove his creativity and his visions do not originate in a deliberate turning of his back on the petty concerns of humanity.
Does any of that make sense? Whether it does ot not, my book features twelve stories written over the past 25 years, from the deliberately silly humour of 'Bridge Over Troubled Blood' (only barely a Lovecraftian story and thus highly vulnerable to derision from any Lovecraftians who read it) to 'On the Other Hand' which I wrote late last year. In between there are stories I really am very proud of, such as 'A Languid Elagabalus of the Tombs' (about the dire consequences of semantics), 'Sigma Octantis' (about an attempted manipulation of astronomical forces), 'How Gangrene was my Sally' (concerned with the overlap of layers of different narratives) and 'The Sauce of the Guile' (in which I believe I finally truly fused the comic with the horrible in an effective manner).
This volume doesn't contain all my 'Lovecraftian' stories. Missing are 'Get Recipe for Mina' and 'The Whisperer in Darkness Bangs his Head on an Unseen Projection' among several others, but I believe it is a comprehensive enough showcase of my short prose fiction in this particular milieu.
The book is available from Amazon and other online bookshops in both paperback and ebook editions. The cover of the paperback was meant to mimic the cover of the Led Zeppelin IV album.
# posted by Rhys Hughes @ 12:10 PM 2 Comments 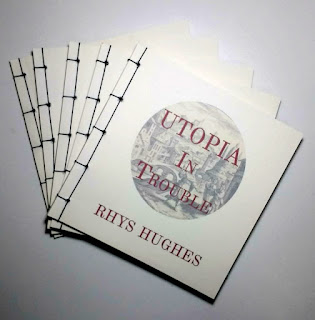 My latest collection of stories is now available from Raphus Press in Brazil. This is an ultra-limited edition of only 30 copies. Unlike my other Raphus Press books I won't be issuing a POD paperback edition, though I might eventually include it in an omnibus edition of works.

I am especially pleased with this collection, which thematically is dear to my heart, as the concept of utopia is one I have thought about a lot over the years. Utopia in Trouble includes my longish short story that is a tribute to the film director Jacques Tati, 'The Playtime of Monunculus', the kind of story I only write occasionally because of the complexity of its multiple layering.

The book has already been treated to a real time review by Des Lewis. It is available from specialist bookstores such as Ziesing Books, Barnebys, and a few others.

Utopia in Trouble is the fifth new book I have had published this summer (I don't count self published books) and it may not be the last. In the meantime I have I have grouped eight of my "Get A" poems into one document to create a chapbook. People can print it out on both sides of one sheet of paper and then fold the sheet like a concertina to make eight separate panels. To download the PDF of the chapbook please follow this link.