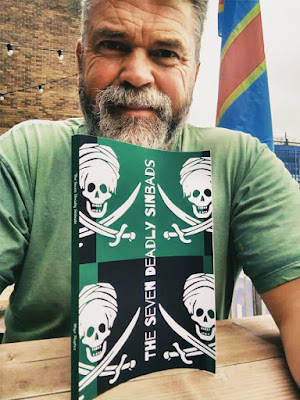 My new book has just been published and is available as a paperback and an ebook.The Seven Deadly Sinbads is a set of linked stories featuring the famous sailor, but they are rather different from the traditional tales in which Sinbad is the hero.

On the surface they are fantasy adventures in which Sinbad visits strange islands, dips beneath the sea to meet mermaids, is shipwrecked and rescued and shipwrecked again, finds a message in a bottle that tells a most remarkable story and ends up performing in a very unusual music festival.

And yes, he has learned wisdom over the years and wraps legends around himself like a cloak.

But here also are the delights and perils of experimental forms. Sinbad is locked into a rigorous numerological exploit with previously unknown brothers, is compelled to find safe passage through labyrinths of layered, divergent and fractured narratives, and must put his supreme talents to surviving cultural catastrophes.

"The wages of sin are death, they say, but we sin every day, and Sinbad earns his salary anyway, on seven salty seas."