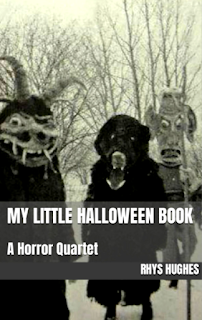 I created a little book for Halloween, but then I realised it was good for any other time of year too. It's a slim pocket-sized volume featuring four horror stories, two of which have been previously published in anthologies, two of which haven't. The stories are diabolical, kafkaesque, macabre and grotesquely comical in turn. Anyway, it is available on all Amazon outlets at the cheapest possible price that I was permitted to set for it.

I supposedly gave up writing horror stories ten years ago, but here I am, still writing the occasional horror story. How do I resolve this contradiction? I guess I could say that my 'horror' isn't conventional horror and maybe isn't horror at all, but something else: dark absurdist fantasy, perhaps, or ironic gothic fantastika. But no, that doesn't really wash.

The truth is that I hardly read horror now but I read it when I was young, in my early teens, and began to move away from it over the subsequent years. By the time of the publication of my first short stories I had completely abandoned horror for other kinds of writing. The stories I wrote between the ages of 14 and 17 (all lost now) were probably the purest horror I have written. However, formative influences can never be entirely disengaged from. There is some horror still deep in my writing soul and it comes out now and then.

That's all I will say for the time being. I guess I ought to also mention that I have left Britain and moved abroad, this time to Sri Lanka. It's nice here, up in the verdant hills above the old capital of Kandy.