Book of the Day, Lady of the Night...

Well I arrived safely in Portugal after an uneventful flight. The sky was cloudy all the way from London to Porto. It was pleasant to fly above the clouds and look down, but not so nice to land in the rain. The weather in Portugal on my first day was no better than in Wales -- rain and wind, and it was cold! That's not what I was hoping for!

Porto is a beautiful city, especially viewed from Vila Nova de Gaia on the other side of the river. Tall crumbling houses with red tiled roofs and iron balconies, lots of graceful churches and towers. The river is crossed by four amazing bridges, the most spectacular of which is the Ponte Luis I, one of Eiffel's projects from 1886. The last time I was here, two years ago, the top walkway was closed, but now it's open! This is definitely one of my favourite bridges in Europe.

I met Pedro Marques, my publisher, at the main train station. I arrived early and while I was waiting I was approached by a girl. We entered into conversation and began discussing the advantages and disadvantages of living in Portugal, the state of the weather, various other standard topics. Then she suddenly asked, "Do you want to sleep with me?" I was astonished for about one second before I realised she was a prostitute looking for work. I replied that I would have to pass on her offer because I was waiting for someone. Without a blink she continued the conversation where it had left off, the weather, politics, etc. My own view on prostitution is that it's a business like any other. All our appetites are commercial: eating, drinking, sleeping. Why not lust? And yet I am always caught by surprise when something like this happens! In Almeria it was simpler: the girls just left me a business card with a phone number on it and didn't try persuasion of any sort.

My publisher finally turned up and we went to a cafe to examine the Portuguese edition of my Infamy book. It looks fabulous! In many ways I actually prefer this to the American edition. Then I went for an interview with a journalist from Público, one of the biggest Portuguese national newspapers. The journalist (Andreía) is a gorgeous Brazilian woman who seems genuinely interested in my work and familiar with it. That's always flattering!

My book launch is tomorrow at 6:00 PM. I'm not sure what I'm expected to do there, but I'm rarely sure of my precise role at such events! I certainly can't read any extracts from the Portuguese edition of my book. At least not in a way that makes any sense to anyone! 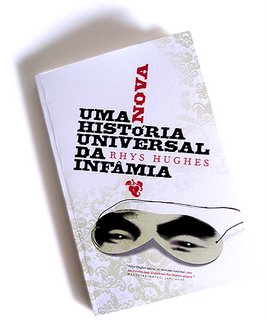 It seems I am returning to Portugal fairly soon. On March 29th to be exact. I am going for the launch of my book, Uma Nova Historia Universal da Infamia. The book launch will take place in Porto, a city in the north of Portugal. The last time I was there was in May 2004, almost two years ago! I think that a second launch (of the same book) will take place in Lisbon a few days later. I'm pleased with the way the publishers have dealt with my book and I love the cover they have designed for it! I am looking forward to seeing how they treat the next book I've prepared for them, A Sereia de Curitiba, a totally mad book I can't seem to stop adding to and adjusting!

Lots of other Portuguese type things are happening. A six page interview with me recently appeared in the literary magazine Os Meus Livros, and I have been asked to deliver a talk in a place called Monção. I had absolutely no idea where Monção was, but I checked in an atlas and I think it's in the far north, right on the Spanish (or should I say Galician?) border. That talk is due to take place in May. I have even been informed that a 4 star hotel is waiting for me there! More details when I know more myself!

In the meantime I am currently looking for a job again. I have completely recovered from my injury and yesterday I went jogging again for the first time in more than six months! That felt nice. I'll probably go again later today. This has been a long hard cold winter and I've been reluctant to stir from the house for the past three or four weeks! Seeing the sun again felt like meeting an old friend who I thought didn't like me anymore!

Pulling My Socks Up

Almost one year after I started writing it, my new book is finally finished!

MY CHOLESTEROL SOCKS is a collection of 16 linked stories that also work like chapters in a novel. This book is a big departure for me -- realistic stories with no fantasy element and no impossibilities. Some scenes are absurdist in nature, but it is only the absurdity of everyday life. I am very pleased with this project. It has been written specifically for a Welsh publisher, Parthian Books.

The main character in the stories, Rhodri, is partly (not entirely) based on me. He has all my faults and few of my (supposed) virtues... Most situations he gets tangled up in are autobiographical or semi-autobiographical, and the people and locations that surround him are (for the most part) entirely real.

The contents page is as follows:

Most of these pieces were written in a state of angst following the loss of my two favourite girlfriends, Lowri and Anahita, one after the other. Therefore it is spiritually dedicated to them. Heartbreak is a favourite tool of the muses...

If the publishers like this book and it proves successful, there may be sequels... I am already toying with the idea of writing a trilogy (THE UNFEASIBLE FOOTWEAR TRILOGY) made up of two further volumes entitled YOUR SATURATED STOCKINGS and OUR MALIGNANT SLIPPERS...