I’ve finished proofreading my collection At the Molehills of Madness and that book should be off to the printer quite soon. The official launch date is September 15 at the Dylan Thomas Centre, Swansea. There may be another launch in Swansea Waterstones the following day. And there may even be a proto-launch also in Swansea, but I don’t have a date for that yet. The Dylan Thomas Centre is a grand location for a book launch. My new girlfriend works there as a Dylan Thomas specialist and used to live in Dylan Thomas’s house, so now I feel slightly ashamed of the way I’ve mocked the great Welsh poet in the past!

My very first book, Worming the Harpy, now looks set to be republished by Prime (USA) in November. For this second edition I have taken pains to correct various errors in the first edition, including reinstating a deleted scene in the title story and replacing ‘Flintlock Jaw’ (now the first chapter of The Clown of the New Eternities) with ‘The Forest Chapel Bell’ (which originally appeared in Tales from Tartarus in 1995). This will be the definitive edition of Worming the Harpy and will include a foreword by John Clute and afterword by E.F. Bleiler.

My novella The Crystal Cosmos, due from PS Publishing next year, will probably have an introduction by the excellent Michael Bishop. I am currently in touch with him and we are in the process of exchanging books. Among other things, Michael Bishop was a collaborator with Ian Watson, and my novella is a tribute to Watson. Strangely enough, I’ve just learned that Michael Bishop completed his master’s degree on the work of Dylan Thomas. I also learned recently that Dylan Thomas might have been a spy for MI6 and/or the CIA in 1950’s Iran!

I’m close to finishing ‘Last Taller Stories’, a sequel to ‘More Taller Stories’, itself a sequel to ‘Taller Stories’ (originally published in Nowhere Near Milk Wood). I’m thinking about collecting all these stories together into a single 100,000 word volume entitled Tallest Stories and offering it to my Portuguese publishers, Livros de Areia. But it might be too long for them like that and might make three small books instead… 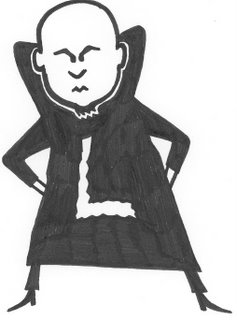 It's time to talk about Anthony Lewis.

The man on the left is Mr Lewis himself, drawn by himself!
In short, he is the bald headed frontman of the band Satori. I have mentioned Satori incidentally in a few tales and written one story specifically about the band. That story is entitled 'Return to Zenda' and it is due to appear in my forthcoming SEREIA DE CURITIBA book. This is useful because Anthony is also the illustrator of that book!

The real band and the fictional band are technically dissimilar but pyrotechnically identical!

Anthony is a rather versatile sort of fellow. As well as being a musician and superb cartoonist he has also tried some acting in his time. He starred in an avant garde film called Crises de Têtes, a film he has still never seen! Tomorrow night (June 14) Satori are playing in the Uplands Tavern, Swansea. I will probably go and see them.