I have just completed a story that I started writing in Turkey in 1994. I don’t mean that I’ve been writing it for 12 years. What happened is that I wrote a page of a tale called ‘Fable with Turkish Coffee’ and then abandoned it, but recently I went back to it and finished it. The completed piece is rather different from what I originally planned, but this is often the way I work and I have a great many half finished stories (and novels) lying around in boxes. Some of these fragments date back to 1992 and the beginning of my publishing career!

One thing that stood out in ‘Fable with Turkish Coffee’ when I first unearthed it was how well it evoked Patara, the town in Turkey where it is set. Certainly, it is always better to use places you have really visited as backgrounds than those you haven’t, but it’s not just a question of conscious description. Details about local buildings, customs and cuisine don’t really do the trick, rather there seems to be something unintentional going on, almost an accidental ambience that gets into a story when the writer is actually writing on location, little things that often don’t have much to do with descriptive writing.

Anyway, ‘Fable with Turkish Coffee’ now forms part of a new project I am currently working on, a book of linked stories set partly on Earth and partly on an adjacent world called Happenstance. When this book is ready I intend to give it the overall title of The Less Lonely Planet. In fact it is nearly done already!

Although I have written stories set in places I have never visited as well as places I have, I generally prefer the latter kind. Therefore it is unlikely I will write a story set in Finland in the near future. I can’t afford to travel to a country as expensive as that. However it seems that my work has no such qualms. Some of it is going to be performed at the Cafe Engel in Helsinki in the coming weeks. The program of events can be found on this website.

The Finn-Brit Players are apparently a bunch of people who do stuff like this regularly... My contact among them is Zoë Chandler, who is the person performing my work. She is also (I point this out smugly and inappropriately) the best looking one among the group... As evidenced by these photos among others...

For many years I have been talking about my intention to write exactly 1000 stories before giving up the writing of fiction. By 'stories' I actually mean items, as some of these stories will be novellas and novels. I was recently asked by editor Tiago Gama, publisher of Phantases, what would happen if I finished that 1000th story and then had more story ideas...

This set me to thinking about that final story and I now have an idea what it's going to be about. It will be entitled simply 'My Thousandth Story' and will feature gladiatorial battles between all the characters who have ever appeared in all my previous stories. They will pair off and fight each other and the winner will progress to the next round and so on... I have no idea who will ultimately win, probably a character I haven't even invented yet.

It's quite likely, of course, that I'll never write that final story. Since I began this project 15 years ago I have written 389 stories. I've almost finished my 390th and I hope to get close to a total of 400 before the end of this year. But even the halfway point of 500 stories seems a very long way off!

Tiago Gama of Phantastes is Portuguese... In the past few days two more of my stories have been published, 'False Dawn of Parrots' in Postscripts #7 and 'But it Pours' in Whispers of Wickedness #13, and both are connected in some way to Portugal... Clearly that country exerts a hold on me! 'False Dawn of Parrots' features some of Anthony Lewis's excellent cartoons and is a particular favourite among my own stories. I'm also pleased with 'But it Pours', which has inaugurated a new story cycle set on an adjacent world called Happenstance. I plan to collect all my Happenstance stories into a small book entitled The Less Lonely Planet.

Meanwhile, I noticed this message from my Slovenia based publisher, Eibonvale Press (click here) that discusses the reprint of my story collection The Smell of Telescopes and includes two illustrations from that book. Almost all the stories in this volume are going to be illustrated in a similar style. I'm delighted by this!

Last night I went to see an outdoor production of Hamlet in the grounds of . I went with Jo, my girlfriend, and half a dozen of her friends. The setting was perfect for the play but as soon as the actors started speaking I was utterly lost. I don’t really understand Shakespeare just by listening to the words. I have to read the plays carefully first and even then I rarely get the full meaning. On his own blog, the venerable Stuart Ross of Frictionless Man has been complaining about not understanding Michael Moorcock’s cult Cornelius novels. Hamlet baffled me as much as The English Assassin has baffled Mr Ross. The essential difference is that nobody I know has ever claimed to understand the Cornelius books, whereas everybody I meet seems to have no problems with Shakespeare at all. During the interval, I bumped into Dai Godwin, guitarist for The Caves, and when I confessed my lack of comprehension about the plot and characters he just shrugged and said, “Hamlet’s easy.”

The best part of the evening in my opinion was the picnic we had while waiting for the play to start. Scones with clotted cream and real strawberries, grapes, cheese, biscuits, pretzels and stuffed black olives! Banquo didn’t appear in the play because he’s from Macbeth (I learned that this morning) but there was another ghost, the ghost of Hamlet’s father, and he looked and spoke exactly like Darth Vader. There were also lots of moths and a bat.

Talking about Frictionless Man, I’m delighted that they’ll be playing at my next booklaunch in September. And in fact, At the Molehills of Madness has just been published! I received a big box of free copies from the publisher yesterday. I’m very happy with the way it looks and I’m looking forward to the launch. I’m sure I’ll plug both the band and my book more in the coming weeks, but for now I’ll settle for quickly mentioning The Pomo Show. The Frictionless Man provide the background music for edition #2 and I briefly appear in edition #3. The show itself is hilarious! 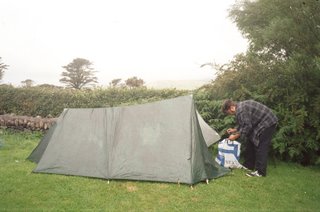 This is the tent I used to go camping in the west of Ireland with my girlfriend last week.
It rained quite a lot and the tent was leaky!
But we survived!
I have been told off for complaining too much about bad weather. The person who told me off is the ineffable Huw Rees, drummer in a thousand and one bands, most of them Welsh, some of them Irish.
I have written several stories featuring Huw Rees and several reviewers have mistakenly believed that he is my own alter ego (Huw Rees = Rhys Hughes).
He's not.

I've just returned from Ireland after spending a few days walking and camping in the rain. I went with my girlfriend for the wedding of her friends, Sadhbh and Marcus. We caught the night ferry from Swansea and arrived in Cork just after dawn. I like Cork a lot. There's nothing much there in the way of sights but the spirit of the place is invigorating. Cork is the home of Beamish, perhaps the finest dark beer in the world, and I sampled a few pints of the stuff. The wedding was very enjoyable and Sadhbh looked lovely and the band played old jazz tunes and everything went to plan, at least as far as I'm aware.

Then I caught a bus to Dingle in the far west of Ireland. The Dingle Peninsula is a remote area where the main language is still Irish rather than English. I was impressed with the place but I might have been happier if the weather had been reasonable. There were some periods of sunshine and even patches of clear sky at night, but mostly the wind was furious and the rain was savage. We set up our tent in the grounds of a rural hostel and drank lots of cheap tea. I was stung by two bees and our tent nearly blew away. But we had a nice walk along part of the Dingle Way, to the beach at Ventry and beyond to the ancient Dun Beag fort. The view across the sea to the Blasket Islands was stunning.

Now I am back in Wales and I have plenty of work to do... It's possible that I might be teaching a short course on 'Fantastical Literature' at the Dylan Thomas Centre early in September, just before the official launch of my Molehills of Madness book. I only have about six weeks to save enough money to go travelling for my 40th birthday. I don't fancy being stuck in Wales during that grotesquely momentous occasion!