Ferry Across the Manzanares... 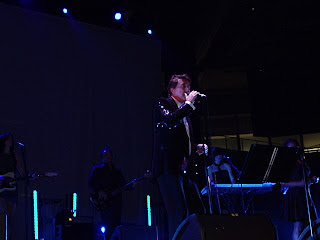 This birthday was particularly good. I went to a party in the house of my new friend Bea with great music, delicious food and interesting people. Also to an exhibition of artworks from ancient Pompeii. And last night I went to a party held to launch a new national newspaper, Público, in a stadium in the Casa de Campo. Free beer, wine and food! There was free music too -- to my astonishment Bryan Ferry played a gig. I love the early Roxy Music, especially when Brian Eno was a member. Not so keen on Roxy's later work, and as for Ferry's solo career... but he did perform a decent version of 'Virginia Plain' so I can't complain too much!

I might go walking in the mountains again soon, perhaps the Sierra de Guadarrama, which are quite close to Madrid. I have to do cheap things because my money is very low at the moment. In fact I'm down to my last €80. I'm hoping to receive a payment fairly soon and that's when I plan to buy a bicycle and do my cycling trip... Time is running short for that, as I have to be in Lisbon in less than a month from now for the launch of Sereia, and I don't think I'm capable of cycling all the way there from Madrid in just 3 weeks!

Aragón -- but Not Forgotten! 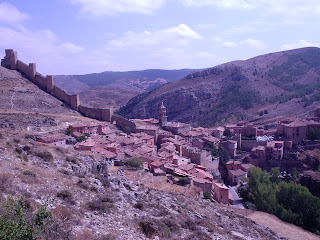 Many things have happened in the past 10 days... I camped wild on the mountains above Albarracín under showers of shooting stars but once slept in an isolated mountain church to escape an unexpected downpour... It so happens that Lower Aragón is the most remote region of Spain, with the fewest villages, roads and people. At night I stood on a peak and couldn't see a single light in any direction. It was strange, lonely, beautiful, ancient, very emotional, and somehow I felt that good luck was with me all the time...

Albarracín itself turned out to be amazingly picturesque, perhaps the prettiest village I've seen in Spain. Tangled narrow alleys, tumbledown houses jutting over enormous drops, rose coloured walls and roofs. Purely by luck I arrived during a traditional fiesta, a ramshackle and bewildering affair with music, dancing, drinking and a bizarre parade in which men of the town dressed as tropical girls danced together with people dressed as giant hands, smarties and characters from Tolkien! I'm not sure exactly how traditional that was!

I was less enamoured by the bullfights which formed a central part of the fiesta. The fights were messy and botched, with an inept matador taking so long to kill one bull that a picador had to finally cut the bull's spinal cord with a knife. The crowd was not impressed. At all times I applauded the bull and on the last day my applause became very loud, for it was the turn of amateurs and drunkards to jump into the arena, resulting in a bull tossing two hapless fellows against the wooden balustrade with considerable force.

Unfortunately I didn't find the source of the River Tajo. My shoes finally fell apart and it was simply impossible to make the journey. Therefore I didn't send Rosa a message in a bottle as I planned, but I created an alternative, of which more in due course...

The book I took to read on my jaunt was Jan Potocki's Manuscript Found in Saragossa, the first Penguin Classic I've read for many years and a truly excellent work of literature!

I've had a good week doing simple enjoyable things. I went to an art exhibition in Cheuca, one of the most vibrant and interesting parts of Madrid; I went to El Pardo north of the city for a lovely walk with my girlfriend along the river; we went out drinking and meeting friends and took turns cooking for each other... Now she's away from Madrid until September 22, so I have decided to follow her example and go on an excursion for 10 days. Yesterday I caught a bus to Teruel, a pleasant town in the south of Aragón, and that's where I am now. This is a part of Spain I've never visited before. Tomorrow I plan to go to Albarracín, an old moorish village about 30km west of here.

I always intended to visit Albarracín on this trip, primarily because the source of the Tejo is in the mountains near that village. Why I'm so keen to visit the source of the Tejo is a mystery even to me, but it seems a good place to launch another message in a bottle, this time to Rosa, who is in Fuerteventura. I see no reason why a bottle shouldn't float the entire length of the Tejo before entering the Atlantic Ocean at Lisbon and then continuing onward to the Canary Islands... The only potential problem is that my friend Safaa might fish it out by mistake while looking for the bottle I sent her a few weeks ago from Toledo... It would be ironic indeed if Safaa got Rosa's message and Rosa got Safaa's, so ironic that it might well happen!

Apologies to anyone waiting to receive an e-mail from me -- my internet access at the moment is minimal and probably will be until I return to Madrid! 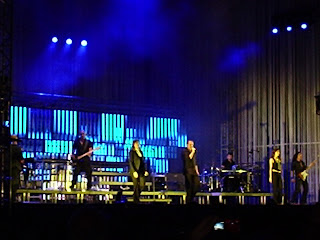 Last Friday I went to the lovely town of Aranjuez, famous for inspiring the Concierto de Aranjuez by Joaquin Rodrigo, but the music I saw performed there was considerably more cheesy than that... Miguel Bosé celebrating 30 years in the music business with a free concert that went on long past midnight. I'd never heard of him but he's a legend here and the women in the audience went wild. He's certainly a showman and although pop isn't my thing there was enough soul and fire to keep me interested.

I was due to depart Madrid at the end of August for regions in the north, but my plans have changed somewhat, as my new girlfriend lives here and I'm reluctant to leave her! I think I'll hang around a little longer before going to Portugal. I'm working on a farm near Carrapateira in October, so I have a whole month free, subject to my finances, which are dwindling rapidly...

There has been some literary activity during my time in Madrid. The seven interconnected stories I began writing in the Alpujarras are all finished and I'm very pleased with them. So tightly are these stories linked that I'm tempted to call the series a novella and publish it in that form. If that happens, the overall title will be The Court of Fictional But Very Serious Crimes and the individual pieces will become 'chapters' rather than true stories. The titles of these seven pieces are as follows:
(1) Lettuce Prey
(2) Azure Like It
(3) Black Toffee Glues
(4) Tarzan at the Apple's Core
(5) Where Angels Fear to Bake Bread
(6) Pleasure For Treasure
(7) Riders of the Purple Mezzotint

This leaves me free to start my Bedsteads Across Iberia novel, but first I have ideas for three or four short stories I want to pin down... In the meantime, returning to the subject of music, I note a new video by the glorious Natacha Atlas, one of the finest music videos I've ever seen, a visual extravaganza that says in images a lot of what I try to say in words!