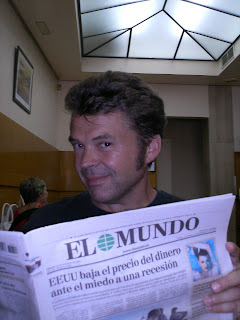 A very interesting year, all in all. People, places, things... I left Wales and arrived in Malaga on June 24, which means I spent most of 2007 in Spain. After that too much happened to summarise easily. My chief impressions of Spain? Rosa, obviously. Walking in the Alpujarras and sleeping in the mountains and meeting a wild boar. Living in the Valle de Sensaciones, hippy style, with tree houses and fires and music. The real hardcore hippies of Orgiva and the strongest marijuana I’ve ever encountered. The Buddhist temple at Osel Ling. The Madrid street parties. Albarracín, perhaps the prettiest village in Spain. My British Council trip to Lisbon. My Hispacon trip to Sevilla. The mighty Picos de Europa. The mists of Galicia. The ancient city of Sanabria and the strange village of Rio Onor on the border with Portugal. Two trips to Toledo and Segovia. Many other memories...

My novella The Crystal Cosmos has just been released by PS Publishing, which means I had no fewer than 5 books published during 2007. It was originally supposed to be 8 books, but I’m not complaining! The others will hopefully follow next year. I wrote exactly 40 short stories, my second highest total for any year, although many were very short. So my ultimate total now stands at 440 stories, 44% of my projected life’s work in the field of fiction... I didn’t do my bicycle tour: I regret that. Maybe I’ll do it next year. Big hugs to the people who were a big part of my life in the first part of 2007: Stuart, Monica, Adele, Hannah... Other hugs also to Filiz, Isabel, Huw, Manuela, Sarita, Safaa, etc...

What have a I got planned for 2008? If I can raise the required money I hope the begin the year with a trip to Africa with Rosa, probably to Senegal and Gambia. More writing, of course! But other work too, satisfying and useful work, work done not just for money but because it makes some sort of valid contribution to the world... Anyway, we can but see. Happy New Year to all! 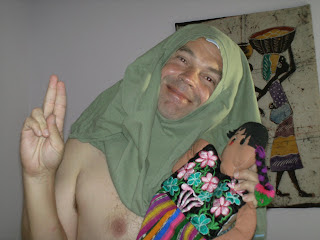 This touching nativity scene was brought to you courtesy of me. With many thanks to photographer Rosa Tristan. The Virgin and child wish peace and happiness for all. Merry Christmas! Personally I despise Christmas, and I imagine Christmas doesn’t have many good things to say about me, but I want you to enjoy yourselves regardless. You do just that, ok? 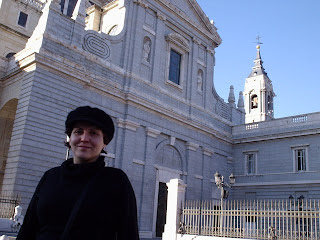 My excellent and lovely Turkish friend Filiz came to visit me for five days. We travelled to Segovia and Toledo and I managed to get her lost on both outings. I imagine she now considers me to be a very poor guide, undeserving of the three large bags of Bombay Mix she brought me. It was wonderful to see her again and I hope to visit her in Turkey next year. She is a gentle person with a kind heart and a beautiful soul. We also visited the Prado and Reina Sofia art galleries in Madrid and I was happy to show her 'The Garden of Earthly Delights’ for real, one of the strangest and most astounding paintings ever. This photo shows her outside the Palacio Real (or perhaps the cathedral, I can’t remember which.)

I also met up with Fabio, an Italian student I first met in Lisbon during my Sereia readings, an extremely interesting and erudite man. We sat in one of Madrid’s many Irish pubs and discussed literature like old time intellectuals: he interviewed me with a set of astute and thought provoking questions. My literary life has been quite busy recently. I have sold many stories to many anthologies, including one to Mike Ashley for the forthcoming Mammoth Book of Extreme Fantasy. ‘The Old House Under the Snow Where Nobody Goes Except You and Me Tonight’ (which originally appeared in Serbian courtesy of Zoran Zivkovic and then in English as the cover story for Postscripts #2) is the second longest of all my story titles. It will also appear in French very soon, in Ficcion, the French equivalent of F&SF.

As for other writing news, I have just put together a new book for Pendragon... Mirrors in the Deluge follows a similar pattern to my earlier Molehills of Madness, being a selection of horror oriented tales from 1990 to the present, but right now it’s only a provisional collection, as the book isn’t scheduled for publication until 2009 or 2010 and I might modify its contents before then. 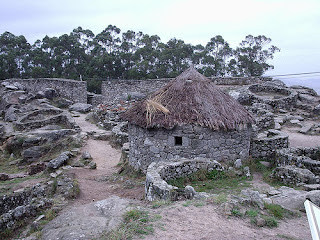 We were invited to Galicia for a long weekend, so we decided to go... On the extreme north western edge of the Iberian peninsula, Galicia is quite distinct from the rest of Spain in terms of landscape, culture and language. It is Celtic in appearance and ambience, with a wild and rugged coastline, similar to Wales or Cornwall. The mists made the mountains and forests seem mythologically significant, a pleasing illusion... We stayed in the tiny village of Corzans with the family of Xavier, one of Rosa’s friends. We were near the River Minho, at a point opposite the town of Monçao. Last year I stood in Monçao and looked across at Galicia, so it was a surprise to find myself on the other bank, looking back at Portugal.

On Friday we visited Tui, a beautiful old city, and the following day took a trip to the coast, to clamber over the hilltop site of the ancient Celtic city of La Garda. The view from the summit was superb, high above the mouth of the mighty Minho, with the coves of Galicia stretching away to the north and the beaches of Portugal gleaming away to the south. To be near the sea again was a relief! The round houses of the ancient city are fascinating, crowded together very tightly, and we managed to cross from one side of the city to the other just by walking on the ruined walls and jumping across the extremely narrow ‘streets’. Galicia is a region full of brujas and brujos but we didn’t meet any of those. At least I don’t think so...

Chestnuts Roasting on an Open Fire 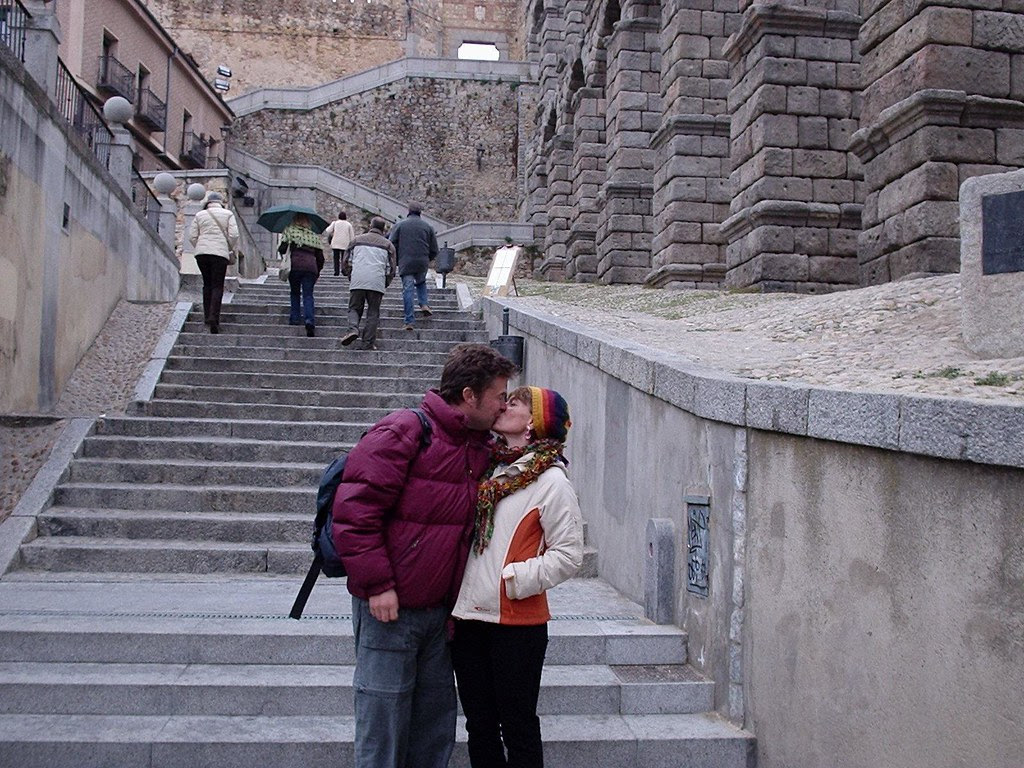 I went to Segovia on the weekend, a town that boasts two of the most impressive structures in Spain – the amazing Alcázar and the incredible Aqueduct. The former is a gigantic fortress that bristles with turrets (a direct inspiration for Disney’s ‘fairytale castle’) and the latter is a supreme example of Roman engineering (the huge stones held together without mortar). When we arrived in the Plaza Mayor we discovered that the annual Festival of Chestnuts was in progress. Lots of traditional music and dancing and free wine and hot chestnuts. Rosa manages the Spanish dances easily but I find the steps too fast. ¡Qué pena!

Winter in Spain is not much more pleasant than winter in the UK. It’s almost as cold here, nearly as damp, and the short days and long windy nights instil the same mild sadness in my soul as they do back in Wales. This is why Africa is such a tempting proposition next month... and/or I might spend a few days walking in the Almerian desert. Deserts are spiffing! Time will tell. In the meanwhile I write and write – five new stories in one week, all short but (hopefully) pithy. I also read and read, finally tackling Fritz Leiber’s ‘Fafhrd and Gray Mouser’ stories, all of them, in order.

A nice review of Sereia appeared in the Portuguese newspaper, Diário de Notícias, recently, here. And a new review of the Spanish Infamia here. My Turkish friend Filiz is coming to visit me in a week or so, and an interesting Italian student I met in Lisbon is coming to Madrid at the same time. Seems a good idea to arrange a special gathering with as many people as possible. Three years ago I met one of Mike Moorcock’s friends in Madrid, a fellow by the monicker of ‘Lapiz’ and I’m wondering if he’s still here. There are plenty of other people to invite: Luis Prado, German Frank, Bohemian Bea, Isabel, Pulpo Steve, Carmen, etc. Anybody else free in Madrid, let me know!