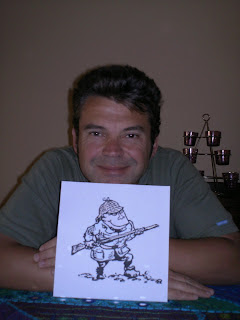 The dwarf surrealist boxer Engelbrecht was a character invented by Maurice Richardson in the 1940s. The Exploits of Engelbrecht is one of the oddest books ever published – a wild gothic satire on sport – and perhaps the finest example of British absurdist humour. In a set of 15 linked stories, Engelbrecht fights clocks, hunts politicians, wrestles with krakens, plays chess with atom bombs and takes part in a rugby game between a team of gigantic Martians and every human being who ever lived.

More than eight years ago I started to write a sequel to this amazing and underrated masterpiece, devoting the best part of a year to the project. The result of my intense work was a volume of 15 stories so tightly linked that I regard them as chapters in a novel rather than separate tales. Engelbrecht Again! is still (in my opinion) my cleverest and most convoluted book. It contains a plethora of OuLiPo style tricks, including lipograms, pataphors, coded passages, fourth wall breakage, typographical antics, pre-emptive strikes against the reader and massive self referentiality!

Night Shade Books (who published my Infamy in 2004) were going to issue Engelbrecht Again! in the USA but they pulled it at the last minute. Now Dead Letter Press have expressed an active interest in rescuing it from oblivion, in a manner not dissimilar to the way Dalkey Archive rescued Felipe Alfau’s wonderful Chromos. I am delighted. The dwarf is back, and so are his associates, including the Old Id, Chippy de Zoete, Tommy Prenderghast, Lizard Bayliss, Joey DeAth, the ‘Thing that is Scarcely a Thing’ and other characters even less salubrious... 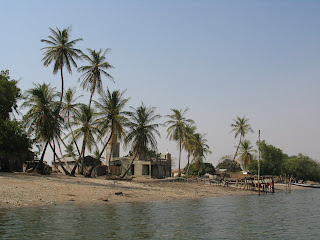 Africa was a tonic and a challenge. Tonic is frequently drunk with gin: it wasn’t that kind of tonic. Paddling a coracle is a challenge, a personal challenge, but it wasn’t like that either. Having said that, I did cross the border between Gambia and Senegal in a canoe. “Out of Africa always something new,” said Pliny the Elder. “Blondes seem to be pretty scarce around here,” said Carl Denham in King Kong. Finding a Welsh flag flying on a pole for no good reason on a random beach is typical of West African weirdness.

Photographic evidence of that minor incident may be viewed here, together with pictures of boats, sunsets, dancers, markets, fruits, monkeys, conked out jeeps, polygamous farmers, marijuana plantations, all the usual things...

Culture shock works just as easily in reverse, something we often forget. Now I’m back in Spain and it seems strange that everybody doesn’t talk to everybody else all the time. West Africans are gregarious in the extreme. Many are genuinely friendly, others are hustlers. The cliche is true: Africa is the ancient soul of the world. But I only saw a tiny fraction of this vast continent and need to return soon.

I believe that I am flying to Gambia on Thursday. I prefer not to tempt fate by stating that I am definitely going. I'm still a little superstitious in that regard. I try not to count my chickens. Talking about chickens, the latest online edition of this magazine features my story 'A Real Nowhere Man'. I rarely submit work to online publishers but over the years various stories of mine have accumulated in various places on the internet. An incomplete list of links can be found here...

I hope there will be sun in Africa. And nice beaches. And peanuts. Gambia is a long thin country. That makes it more difficult to get lost. Perhaps.

I began the year with a dose of mild flu, but now have almost recovered. Everyone is Madrid is sneezing and coughing. I’m taking it easy, waiting for the winter to pack its bags, wanting only to sleep. Hibernation is a natural state for mankind, I’m sure. Nobody else agrees with this. With luck I’m still going to Africa for a final holiday fling before returning to Wales.

I am currently proofreading my Less Lonely Planet book. I have also just finished proofreading two stories for a new anthology that will go to print later this month. Bound For Evil is themed around strange books. My contributions are ‘Finding the Book of Sand’ and ‘Lem’s Last Book’, two of the best stories I’ve written on this particular subject.

A new anti-culture journal, Polluto, has just been launched, specialising in trangressive fiction . My three contributions are two ‘Mr Gum’ stories, both satires against the institution of the creative writing class, and ‘Cracking Nuts With Jan Hammer’, a snacks-and-damnation fable that features Welsh prog-rockers Satori and is told from the viewpoint of frontman and bald cartoonist Anthony Lewis.

Christopher Golden of Dark Horse recently asked me to write a Hellboy story for a forthcoming anthology, Oddest Jobs, and I agreed and pitched him an idea. He liked it. I think it will take a week or so to write the piece. I knew nothing at all about Hellboy before I was approached but now I’ve read several of the comics. This is certainly one of my most unexpected commissions!