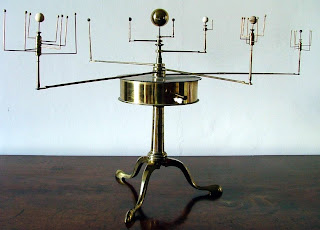 Publication of Engelbrecht Again! is imminent and there will be a small party to celebrate the much anticipated arrival of my long delayed Magnum Opus. Anyone who wants to come just needs to send me an email, but don't expect dionysian debaucheries or corybantic fulgors (though I'll try to persuade Adele to dance) as it's more likely to be just a small pleasant gathering. Think mild revelery rather than wild!

Seems that the pirate anthology Fast Ships, Black Sails has been picked up by Newton Compton, which means I'm going to be translated into Italian! This resonates strongly with me because of my love of Calvino. Italian is one of the languages I most want to be translated into. Even without the existence of Calvino I would still love Italy for many reasons. The extensive range of vegetarian options. The scenery. And music.
I also crave to be translated into Esperanto.
Issue #8 of Bust Down the Door and Eat all the Chickens has just been released, containing my story 'Castle Cesare' -- an absurdist gothic romp about a man trapped on a giant orrery. For no special reason the orrery is located in an Italian castle. The picture above shows an orrery. I once owned a small cardboard and plastic one but it didn't work.
I wrote the first version of 'Castle Cesare' when I was about 15 years old. That version was lost long ago and I rewrote it 25 years later. The rewrite is utterly different from the original. This often happens and is a typical working method of mine. Another recent example of this process is 'Nightmare Alley', published in a recent Humdrumming anthology.
My Mister Gum novel now looks set to be released next March. There's a small chance a limited edition chapbook might be issued to accompany the first 100 copies, but I'm not sure yet what the contents of that chapbook will be. Maybe my three Fanny fables (collected together as 'Fanny Cubed') or possibly something to do with prog rock or Cthulhu. Time will tell.
My set of 'Counter Earth' stories are turning into a novel entitled Ditto and Likewise. I should have finished the other novels I was working on before beginning a new one, but it's too late now. Ah well!
# posted by Rhys Hughes @ 10:48 AM 1 Comments 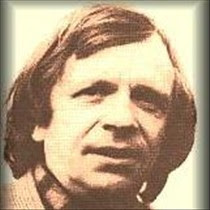 Last week the world said goodbye to Barrington J Bayley, one of the most underrated writers in the history of literature. Not much of the world said goodbye to him (because he was so underrated) but most of it should have sat up and taken some sort of notice. Bayley was a pulp Borges, a space opera Zeno, his concepts the equal of those masters, his polyrhythmic plotting without parallel (without even those parallels that meet at infinity), his grasp and control of paradox rather incredible. Quite simply he was a genius.

Bayley is one of the most poignant examples of the unfairness of the business. We live (and probably always have) in an age where intellectual generosity is misunderstood and treated with suspicion. Popular writers of fantastical fiction give the reading public one or two 'ideas' per book. We are comfortable with such paucity because it doesn't challenge us. We can't really stand what Bayley offered -- dozens of ultra-clever original high level IDEAS per chapter -- though we always claim that's exactly what we want!

Bayley was a high concept writer who worked out his amazing conceits in the guise of hardish science fiction. Apart from the surfeit of ideas, the potential reader of his work will have to cope with his downbeat endings and generally bleak philosophy, both of which undoubtedly worked against his chances of achieving major recognition. But it also has to be pointed out that he didn't seem to want to help himself much. His hunger for fame was minimal or even non-existent. Shame. 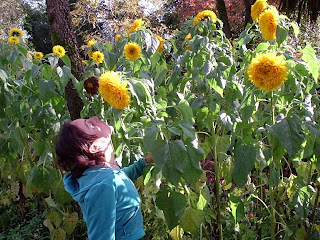 Engelbrecht is at the printers (the book, not the actual dwarf) and so I have been signing bookplates for the time when it emerges. 300 in total. I am also supposed to be making my mark on a set of signature sheets for a forthcoming issue of Postscripts but they went to the wrong address (my fault) and now I don't know where they are. The concept of the 'signature' is rather an odd one. Why should a handwritten name increase the value of a book? But it does.
Talking about signatures, here's a question I want to pose: is it permitted for an author to change his signature halfway through his or her career? I have been recently experimenting with a new signature but I don't know if I can allow myself to use it. For one thing it seems unfair on readers who have bought my previous books. Shall I stick with my old signature, even though it no longer pleases me? What would you do in my position?
Although everything I write is ultimately interconnected, my stories tend to form individual wheels of varying size and complexity within the greater scheme. I have lately been adding to two minor cycles: (1) My 'Two Doctors' sequence, featuring Dr Frazer and Dr Vaughan, whose rivalries and disagreements always result in catastrophe for their patients; and (2) 'Fanny the Fantasist', a set of short inverse fairy tales that mock escapism and feyness with unwarranted savagery.
Coming Soon -- Farmerphile#14.
# posted by Rhys Hughes @ 11:14 AM 5 Comments 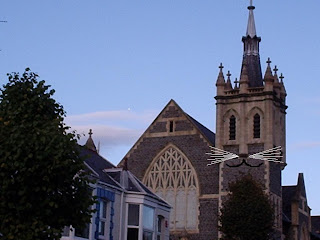 The real summer was a washout but we had an Indian summer. Tomahawks clattered on the pavements, arrows shredded the curtains... Not really: but the past two or three weeks have been generally sunny (though getting cold). We had a big fire on the beach and cooked corn-on-the-cob in the embers. Yum! It was many years before I learned how to barbecue maize properly: you simply leave the leaves on. Stuart Ross taught me that. It works!
There's a church not far from where I live that looks like a mythical being from a snail-god cult. That's what I think anyway. I decided at last to take a photograph of it and add lips and whiskers, just to exacerbate the illusion. Not that snail-gods have whiskers. Cats do, though, and maybe it looks more like a cat-god. I must confess that I'm no expert on religions that have never existed... Here it is. Judge for yourself!
# posted by Rhys Hughes @ 9:18 AM 0 Comments